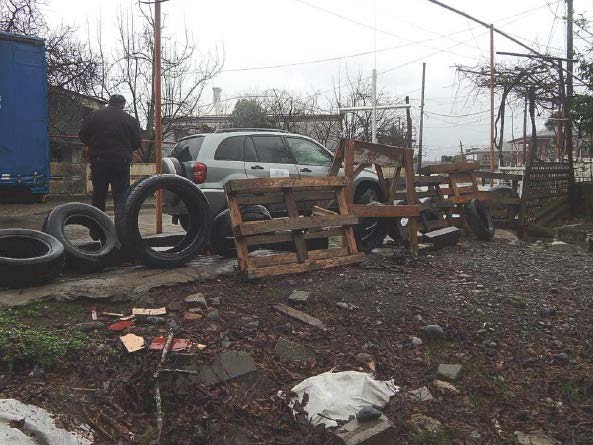 Ordinarily, the opening of a new school would be a cause for celebration for the local community. But in 2014, in the village of Kobuleti on Georgia’s Black Sea coast, plans for a new Muslim boarding school were marred by the abuse and harassment of local Muslims by the Orthodox Christian population. At the peak of this spate of hate crime, Christian protesters nailed a bleeding pig’s head to the door of the school.

EHRAC and the Human Rights Education and Monitoring Centre (EMC, Tbilisi) represent the school’s owners and members of the local Muslim community, as they turn to the European Court of Human Rights. In our joint application, submitted in April 2019, we argued that the local police failed to protect our clients from Islamophobic abuse and hate crimes – a systemic problem in Georgia – and to investigate. The Court swiftly communicated the case to the Georgian authorities for their observations on 8 July, less than three months later, indicating the severity of this issue.

In August 2014, Georgian Muslim Relations (GMR, a not-for-profit organisation) acquired the rights to a building and land in Kobuleti, intending to open a Muslim boarding school for up to 40 students. However, they faced opposition from the local Orthodox Christian community, who shouted Islamophobic abuse and threatened them, protested at the school and prevented vital works to prepare the school for opening, including connecting the school to the water supply or building renovations. Though members of the Muslim community called the police, when they arrived, they simply remained in their cars or stated they would not become involved unless there was a physical confrontation.

By September 2015, the school was furnished and due to open. However, protesters shouted verbal abuse at school employees, parents and pupils and threatened physical violence. On one occasion, after the police had advised Muslims present to leave the property, representatives of the Orthodox Christian community nailed a pig’s head, dripping with blood, to the school’s door, and threatened to fill the area with pigs. Protesters erected a wooden and tyre barricade, and a large white cross at the entrance to the school and maintained a permanent protest outside, which included holding collective Christian prayers. During the next two months, the protesters controlled who could enter and remain in the school, intimidating or threatening those associated with the school. Although the police also had a near-constant presence in the area outside the school, they did not intervene at any stage. By November 2014, no one remained at the boarding school, and the school has never opened.

Why should the state authorities be held responsible?

EHRAC and EMC argue before the European Court that GMR and seven individuals were subjected to discriminatory treatment motivated by their religion. The authorities had failed to protect them from verbal aggression, humiliation, insults, threats and consequent psychological stress, failed to detect or protect them from hate crimes, and failed to adequately investigate whether the crimes were motivated by discrimination (in violation of Articles 3 and/or 8 of the European Convention on Human Rights with Article 14). The investigation is still ongoing, over four years later, with no obvious results. In addition, we argue that the failure of the state-owned water company and/or municipality to connect the building to the sewage system is a direct interference with the right to peaceful enjoyment of possessions, as well as Georgia’s failure to fulfil its positive obligation to facilitate access to the school for individuals and the water company (Article 1 of Protocol 1).

Systemic discrimination towards religious minorities in Georgia has been the subject of international concern, including by the UN Human Rights Committee, the European Commission against Racism and Intolerance and the Council of Europe Commissioner for Human Rights. EHRAC and EMC are taking another case, concerning police hate crime against Muslims protesting plans to convert an old mosque into a public building. The Public Defender of Georgia referred to the Mokhe incident in its 2015 report on “The situation regarding the protection of human rights and freedoms”, noting that “one of the main problems is the lack of a timely, adequate and effective response to offences committed on the basis of religious intolerance and hatred.” Although anti-discrimination legislation exists in Georgia, it is not effectively implemented and prosecutions against state officials, such as the police, are rare.