It’s been another busy and productive three months at EHRAC. The broad range of themes addressed through our recent litigation – from violence against women to the conflict in eastern Ukraine to abuse faced by ethnic and religious minorities – reflects EHRAC’s strategic priority to remain flexible to the most pressing human rights issues in Russia, Ukraine and the South Caucasus. You can read about some of our most recent cases below.

We’re breaking new ground with regards to the vast number of disappearance cases from the North Caucasus in our briefings before the Council of Europe. Despite judgments from the European Court finding the Russian authorities responsible for the disappearance of hundreds of people between 1999 and 2005, very few steps have been taken to provide families with information about what happened to their loved ones. In June, EHRAC and two forensic scientists (Rebecca Gowland, Professor of Human Bioarchaeology at Durham University, and Tim Thompson, Professor of Applied Biological Anthropology at Teeside University) briefed several groups within the Council of Europe (including the PACE Committee on Legal Affairs and Human Rights) on the scientific possibilities for identifying, excavating and potentially exhuming graves, challenging the Russian authorities’ assertion that sufficient progress is being made in the domestic investigations. 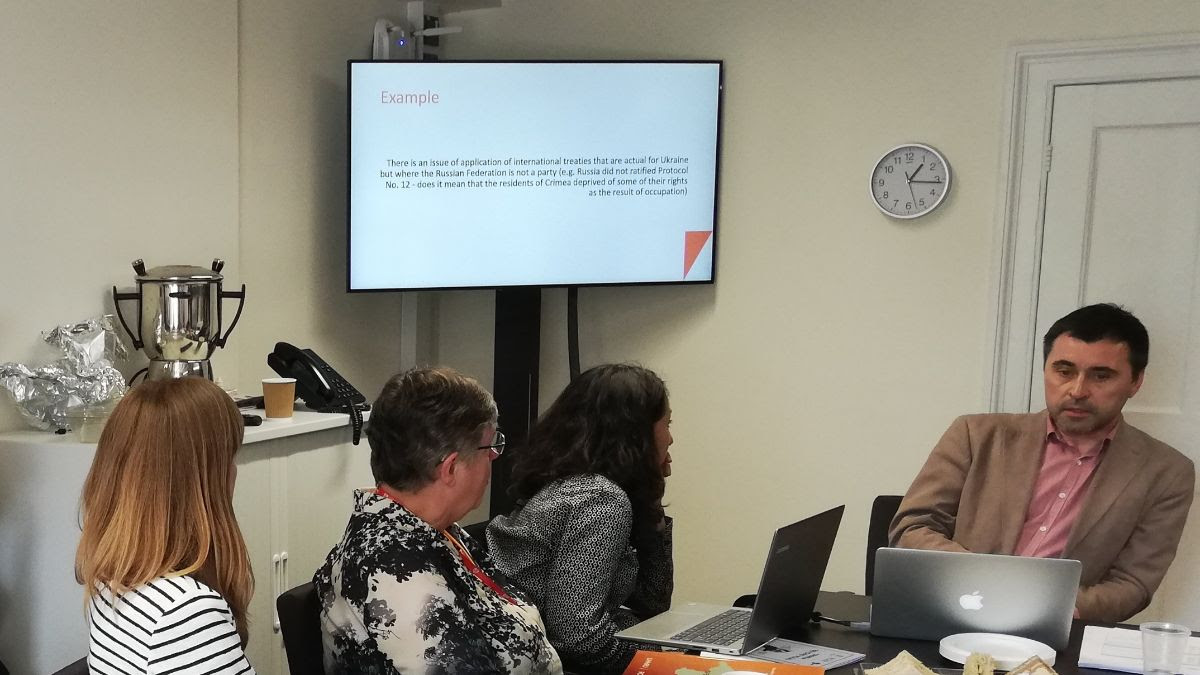 In May, we welcomed our partners from the Regional Centre for Human Rights in Kyiv for two days of legal clinics and training. Legal Expert Sergiy Zayets also spoke at one of our ‘Church Farm Seminars’ (named after the 17th Century farmhouse where EHRAC is based) about the human rights situation in Crimea, and the potential for testing and exploring new legal strategies before international mechanisms.

We were pleased to learn that our former Legal Consultant Vahe Grigoryan was appointed judge of the Armenian Constitutional Court.

The annexation of Crimea: Continuing interference with rights guaranteed under the ECHR

Sergiy Zayets and Gaiane Nuridzhanian examine instances of ‘continuing situations’ and ‘continuing interference’ with human rights, and to what extent these legal concepts can be applied to the Russian occupation of Crimea.

What future for settlements and undertakings in international human rights resolution?

EHRAC Director Philip Leach and Nino Jomarjidze discuss who assesses whether undertakings made in friendly settlements or unilateral declarations have been met, and what happens when governments fail to comply, with reference to cases settled by the Georgian Government in 2015.

Has the ECtHR in Mammadov 46(4) opened the door to findings of  ‘bad faith’ in trials?

EHRAC Legal Director Jessica Gavron and Legal Consultant Ramute Remezaite discuss the ramifications of the Grand Chamber judgment in the infringement proceedings concerning Azerbaijan’s failure to comply with the Court’s original judgment in Ilgar Mammadov and the potential for the Court’s more robust approach in applying Article 18 (Limitation on use of restrictions on rights).

The Council of Europe highly values the input of NGOs and national human rights institutions with regards to the execution of judgments, and has published guidance on how best to draft submissions, when to make them and practical information about how to communicate with the Committee.

EHRAC Legal Director Joanna Evans participated in a global study by the Human Rights Resilience Project into mental health in human rights organisations including the sources and consequences of poor mental health and stress, challenges to improving wellbeing and positive practices for supporting wellbeing and resilience. The report, published in May 2019, also includes wellbeing recommendations for NGOs and donors.

Following his mission to Georgia in autumn 2018, Victor Madrigal-Borloz published his report on the human rights situation of LGBT and gender diverse people in Georgia,  including violence, hate crime, employment, IDAHO events, gender identity, and health.  The report identified positive steps and remaining challenges and formulated recommendations to strengthen the protection of persons against phobia-based hate crimes and violence and to curtail, and ultimately eradicate, discrimination based on sexual orientation and gender identity.

Mr Madrigal-Borloz also conducted a country visit to Ukraine between 30 April and 10 May 2019, following which he published his end of Mission statement. In it, he addressed issues such as the invisibility of the LGBT population, attacks on pride events and impunity of perpetrators, the specific effect of the conflict on LGBT people including as IDPs, the absence of SOGI as an aggravating factor in criminal offences, hate speech by state officials, violence from far right groups, and legal gender recognition (on the basis of irreversible medical intervention).