It’s been a busy summer! We won 4 cases on behalf of 13 applicants relating to Russia’s culpability in enforced disappearances in the North Caucasus, Azerbaijan’s suppression of a prominent human rights NGO and Georgia’s impunity in state-sanctioned murder. In addition, the European Court of Human Rights (ECtHR) found that Russia’s refusal to register 3 LGBT+ organisations was unjustified and discriminatory. We submitted a joint third-party intervention in this case with ILGA-Europe and the International Commission of Jurists (ICJ).

In response to the deteriorating climate for human rights defenders in Azerbaijan, we have compiled a comprehensive list of all those lawyers who have been disbarred, suspended or criminally prosecuted as a result of their tireless work to defend human rights. We have used this list in a key briefing note for the European External Action Service (EEAS) on Azerbaijan’s compliance with European Court judgments, and we will be sending it to the UN Special Rapporteur on the subject of the independence of the legal profession in Azerbaijan. We hope that our lawyers list will prove to be an invaluable resource for human rights defenders in Azerbaijan and across the region. We have also filed a new ECtHR application on behalf of disbarred Azerbaijani lawyer Yalchin Imanov.

We recently commissioned Forensic Architecture, a digital investigations agency based at the University of London, to gather and present evidence of Russian military presence in and around Ilovaisk in the contested Donetsk region in August 2014. This evidence has been submitted to the ECtHR – in the form of a publicly viewable online platform – as part of a case that we are litigating on behalf of 25 Ukrainian volunteer combatants who fought in the Battle of Ilovaisk. It is the first time that evidence of this type has been submitted to the ECtHR. The volunteer combatants were first captured by Russian Armed Forces before being unlawfully handed over to separatists from the unrecognised Donetsk People’s Republic, who detained and ill-treated them until their release between December 2014 and June 2015. You can read about the case and our work with Forensic Architecture in Shaun Walker’s article in The Guardian. 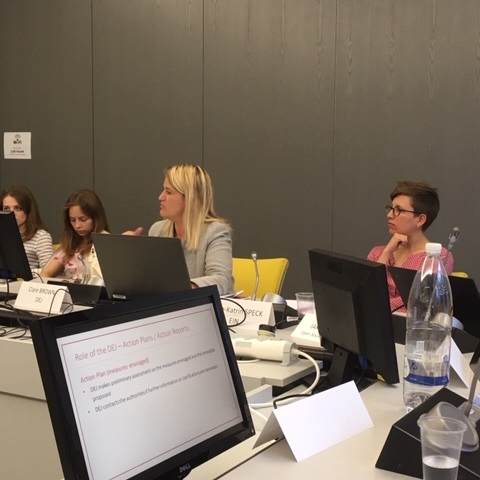 In July, we welcomed partner lawyers from Armenia, Georgia and Ukraine for our Legal Skills Development Programme in Strasbourg for three days of legal clinics and meetings with ECtHR judges and lawyers, advisers to the Commissioner for Human Rights and the Department for the Execution of Judgments. Lawyers also received training on making submissions on implementation to the Committee of Ministers from the European Implementation Network (EIN). The participants also attended the Grand Chamber hearing of Big Brother Watch v UK, a landmark case on mass electronic surveillance.

In September, we delivered two days of legal clinics and training in Kyiv to our partners at the Regional Centre for Human Rights (RCHR), the Ukrainian Legal Advisory Group (ULAG) and the Ukrainian Helsinki Human Rights Union (UHHRU). We also participated in a OSCE HDIM side event in Warsaw on the subject of the persecution of human rights lawyers, as well as the wider problems facing the legal profession in the OSCE region. EHRAC legal consultant Ramute Remezaite spoke along with Azerbaijani human rights defenders Rasul Jafarov and Khalid Bagirov about the situation in Azerbaijan.

We would like to thank, as always, those who support and work with us, including by contributing to our Blog and case summaries. We hope that you find this Bulletin an interesting read and a valuable resource.

“Now we can only talk about the weather, cats and pie recipes”: New censorship laws in Russia

Galina Arapova, Head of the Mass Media Defence Centre, discusses amendments to Federal Law No. 149-FZ, under which the publication of ‘fake news’ and “disrespect for the authorities” can be censored.

EHRAC Chevening Scholar Roman Kiselyov explains how Russia’s new censorship laws have been applied, confirming that human rights defenders’ fears about possible abuses of the laws have been borne out in practice.

The European Court of Human Rights deals with the majority of cases on paper without holding an oral hearing. Written witness statements are therefore the most important way of presenting the evidence of victims, or other persons, to the Court. This updated booklet produced by EHRAC in English is a practical guide to preparing detailed witness statements. This guide will soon be published in Russian, Georgian and Ukrainian.

The first ever judgments concerning gross human rights violations in the North Caucasus were delivered by the European Court of Human Rights on 24 February 2005 in six precedent-setting cases co-litigated by EHRAC and Memorial Human Rights Centre. Hundreds more have followed. We recently updated our North Caucasus database to include all judgments in the last two years.

We are representing several Azerbaijani human rights lawyers in European Court cases challenging their disbarment and harassment by the authorities. As part of this growing body of litigation, we recently compiled a comprehensive list featuring those who have faced sanctions as a result of their human rights work.