In its judgment, the European Court found a violation of the right to freedom of association under Article 11 of the ECHR, in that the Ministry of Justice had wrongly applied the domestic laws, resulting in an unlawful delay and the de facto inability of the HRC to be registered and to function as intended. It also found that the domestic courts had “failed to give any legal assessment” of the procedural requirements for registration, or “of the registering authority’s exercise of its functions”, nor did they explain whether the Ministry of Justice had complied with those requirements. 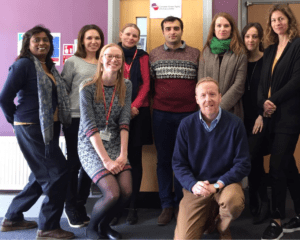 Rasul visiting the EHRAC team after his release in 2016

This case is not an isolated one and is representative of the Government’s crackdown on human rights defenders, journalists, lawyers and civil society organisations through criminalisation of their work since 2014. In its 2016 judgment on Rasul’s arrest and detention, the European Court relied on “the general context of the increasingly harsh and restrictive legislative regulation of NGO activity and funding” leading to “an NGO activist being prosecuted”, and “a larger campaign to ‘crack down on human rights defenders in Azerbaijan, which had intensified over the summer of 2014’”, finding his detention was politically motivated (paras 159, 161). Similar findings have been found in the cases of NGO leaders Intigam Aliyev, also represented by EHRAC, in September 2018 and Anar Mammadli in April 2018, with applications of other human rights defenders awaiting judgment.