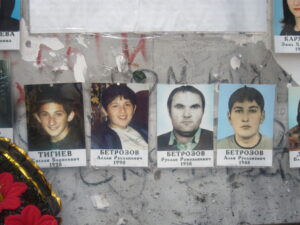 Over 400 victims of the 2004 Beslan School Siege and their families found justice today as the European Court of Human Rights ruled that there were serious failings in the Russian authorities’ response, which contributed to the casualties amongst the hostages. 300 of the applicants in this case were represented by the European Human Rights Advocacy Centre, based at Middlesex University, and Memorial Human Rights Centre.

On 1 September 2004, School No. 1, the largest school in Beslan, was attacked by Chechen separatists who held 1128 people (886 children) hostage in the school for three days. On the third day, state security forces stormed the school, armed with weapons including a tank cannon, grenade launchers and flame-throwers.  The siege and ensuing intense assault by the security forces, using tanks and flamethrowers, resulted in 331 deaths, including 186 children, and countless injuries.

“The Court is quite right about Russia…that it should take measures [to address the situation]. There is no family in Beslan which hasn’t been impacted. We as a community became closer to each other because we had a common problem… I was too young, so maybe I didn’t understand [what was happening]. I remember that there was a total lack of water, and we wanted to drink so much.”[1]

Zarina Dzampayeva, who was eight years old at the time of the siege

In its long-awaited judgment, the European Court established four separate violations of the right to life. Firstly, with respect to all the applicants, it found that the authorities failed to take preventative security measures given that there was prior knowledge that an attack was planned in the area at an educational institution (paragraphs 478-493) in breach of Russia’s positive obligation to protect the right to life (Article 2 of the European Convention on Human Rights (ECHR)). Furthermore, the investigation into the siege failed to establish whether the force used by the State was justified (paras. 494-593). There was also no proper examination of how the victims had died and the authorities failed to properly secure and record evidence before the site was irreparably altered by large machinery and the lifting of the security cordon the day after the rescue operation ended.

The applicants represented by EHRAC and Memorial HRC successfully raised two further arguments under Article 2, regarding the authorities’ response to the siege. The Court found serious shortcomings in the planning and control of the security operation. The absence of formal leadership led to serious flaws in in the decision-making process, and affected the authorities’ ability to coordinate the medical, rescue and firefighting response (paras 540-574). It also concluded that the security forces used disproportionately powerful and indiscriminate weapons (including tank cannon, grenade launchers and flame-throwers), resulting in hundreds of fatalities and injuries (paras 575-611). Furthermore, the Court held that they failed to set up a “framework of a system of adequate and effective safeguards against arbitrariness and abuse of force”, leading to a gap in the regulation of life-threatening situations. The Court found that the Russian Government had “not provided a “satisfactory and convincing explanation” that the lethal force used had been no more than absolutely necessary,” and such a massive use of explosive and indiscriminate weapons could not be regarded as absolutely necessary.

“The extreme nature of the attack on schoolchildren in Beslan is burnt into Russia’s national consciousness. This case is just as relevant today given the continuing threat of terror attacks in Russia and across the world. The Russian state has refused to acknowledge its role in this terrible loss of life and today’s judgment is a pivotal moment in holding Russia to account.”

Invoking the legally binding nature of its judgments (under Art. 46 ECHR), the Court concluded that the State should take steps aimed at drawing lessons from the past, raising awareness of the relevant legal and operational standards, and deterring new violations of a similar nature:

“This ground-breaking judgment provides a significant measure of justice for the families, after so many years. It establishes the extent of the Russian authorities’ responsibility for severe loss of life during the Beslan School Siege, but also calls for important lessons to be learned, so that the mistakes made at Beslan are not repeated.”