On 6 October 2020 the European Court of Human Rights found that Russia’s anti-extremist legislation failed to safeguard the free expression of two Novorossiysk human rights defenders who were sanctioned following a public protest in 2009.

Vadim Karastelev and Tamara Karasteleva were formally warned by local prosecutors after staging a protest in Novorossiysk city centre. Prosecutors sanctioned them under federal anti-extremist legislation, indicating that they were conducting “propagandistic activity” that could potentially give rise to violent extremism.

The European Court ruled that the anti-extremist law was “formulated in broad terms” and left “too wide discretion” to the prosecutor—amounting to “unfettered power”—and was therefore in violation of the protestors’ right to freedom of expression.

“I am very happy that this judgment was finally adopted. Unfortunately, the situation with the freedom of expression and assembly is even worse now, and the individuals responsible for the violations have not yet been convicted. “Fight for justice” was the slogan of our organisation, and our personal fight. We will continue to do it.”

EHRAC, together with the Russian NGO Memorial HRC, represented Vadim, Tamara, and Novorossiysk Committee for Human Rights. Tamara sadly passed away in 2011. Her son, Dimitriy, continued her application.

What happened to Vadim and Tamara? 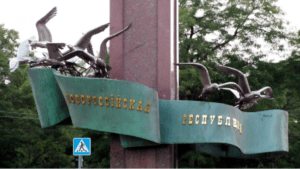 On 18 April 2009, Vadim Karastelev and his late wife Tamara staged a small-scale demonstration near the Respublika monument in Novorossiysk, having given prior notice of it to the local authorities.

It was the second time that the couple had come out in protest of a new law, the Minors Protection Act, that required parents to ensure that their children did not go to public places at night without being accompanied by an adult. Vadim and Tamara considered the legislation to be restrictive and unconstitutional.

During their protest action, two teenagers approached Vadim and Tamara and engaged them in conversation. The couple told the teenagers why they were protesting and pointed out the posters that they had brought with them to display.

Nine days later, Vadim and Tamara were summoned to the Novorossiysk prosecutor’s office.

It soon became apparent that the parents of the two teenagers had lodged official complaints against them alleging they had conducted “propagandistic activity” among minors, including activity on a school premises. The parents claimed that Vadim and Tamara had invited the teenagers and their friends to take part in future demonstrations against the new law.

When questioned by prosecutors, Vadim and Tamara denied that their protest had any connection to their work with the Novorossiysk Human Rights Committee (“NCHR”) and affirmed that they had taken part as private citizens. They also denied having carried out any work with schoolchildren.

Prosecutors issued Vadim and Tamara with written warnings in their capacity as NCHR representatives. A formal caution was issued to the NGO, indicating the unacceptability of “extremist activities” and threatening it with dissolution if new facts came to light. It was further ordered to remedy violations of the anti-extremist legislation and report back to the authorities.

The authorities believed that Vadim and Tamara’s alleged “propagandistic actions” amounted to calls to carry out anti-social actions which in turn could give rise to violent extremism.

Tamara lodged a complaint with a Novorossiysk court in June 2009 contesting the authorities’ actions. But the court dismissed her appeal, endorsing the conclusions of expert witnesses who had deemed a poster, allegedly displayed by Tamara and Vadim, as extremist in nature. Tamara and Vadim denied having displayed the poster at the protest action in question.

The European Court of Human Rights was not satisfied that Russian law afforded sufficient legal safeguards against arbitrary interferences by the authorities with the applicants’ right to freedom of expression (Article 10 of the European Convention on Human Rights). It primarily focused on the Russian authorities’ interpretation and application of anti-extremist legislation (the 2002 Suppression of Extremism Act), concluding that the domestic law was “formulated in broad terms” and left “too wide discretion” to the prosecutor.

In the Court’s view, it remained unclear whether prosecutors had used any “ascertainable and foreseeable criteria” in order to justify the finding that the applicants were “planning” extremist activity which would (in keeping with the definition of “extremist activity” outlined in the Suppression of Extremism Act) “obstruct the lawful activities of the State authorities” combined with “violence or threats of violence”.

In his concurring opinion, Judge Lemmens contended that the majority had gone too far in examining the specific application of anti-extremist legislation in the applicants’ case, and that they had therefore, in effect, argued that the prosecutor had not complied with the conditions set by the Suppression of Extremism Act. This, he argued, “detract[ed] from the central message, namely that the Suppression of Extremism Act needs to be amended in order to make it Convention-compliant.”

The Court therefore found a violation of the right to freedom of expression (Art. 10) in respect of both Vadim Karastelev and Tamara Karasteleva.

Vadim Karastelev also alleged that he had been denied access to a court in respect of the warning issued to him, in breach of his right to a fair trial (Art. 6). He claimed that his appeal had been turned down because of the parallel proceedings brought by his wife, Tamara, in which a final judgment had yet to be delivered.

The Court concluded that his right to a fair hearing (Art. 6) had therefore been violated.

The Court ordered Russia to pay Vadim Karastelev damages of €3,000.