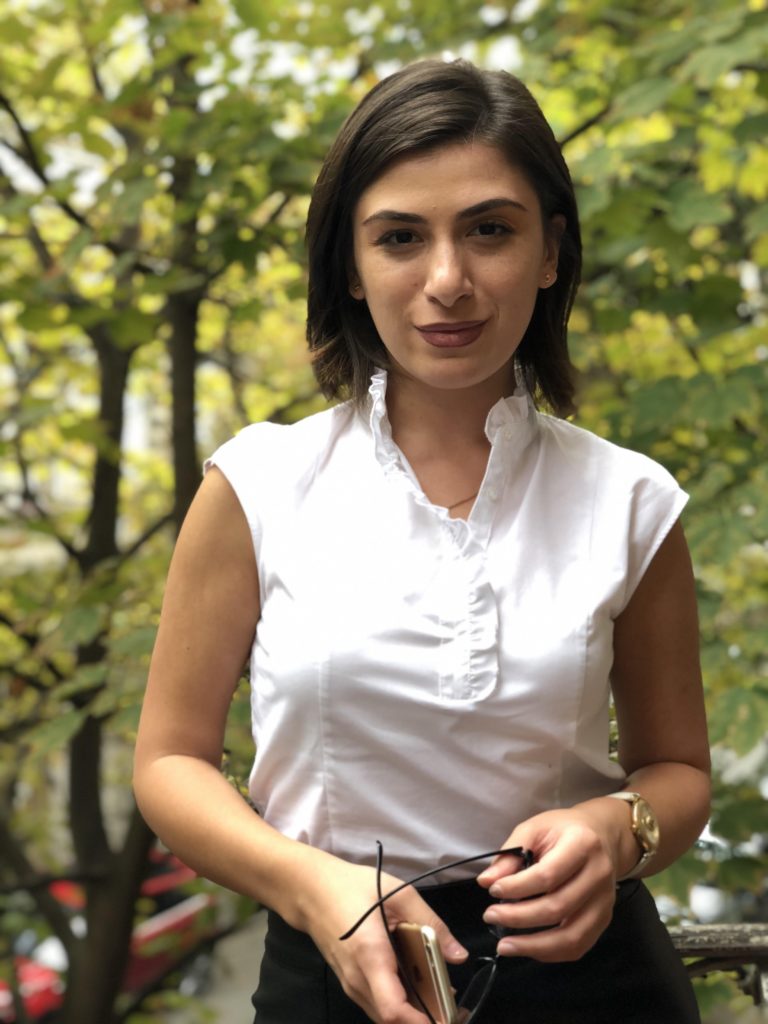 From 8 July to 11 July 2019, we welcomed seven partner lawyers from Armenia, Georgia and Ukraine for our Legal Skills Development Programme (LSDP) in Strasbourg for three days of legal clinics and meetings with ECtHR judges and lawyers, advisers to the Commissioner for Human Rights and the Department for the Execution of Judgments. Lawyers also received training from the European Implementation Network (EIN) on making submissions to the Committee of Ministers. Participants also had the chance to attend the Grand Chamber hearing in Big Brother Watch & others v United Kingdom, a landmark case on mass electronic surveillance. LSDP participants included representatives from EHRAC’s partner organisations: Ukraine’s Regional Centre for Human Rights (RCHR), the Ukrainian Legal Advisory Group (ULAG), the Georgian Young Lawyers’ Association (GYLA), Tbilisi-based Human Rights Education and Monitoring Centre (EMC), Armenia’s Europe in Law Association (ELA) and the Georgian Democracy Initiative (GDI).

EHRAC spoke to one of the participants, GYLA Strategic Litigation Lawyer Tamar Oniani, about her experience in Strasbourg.

What first inspired you to become a human rights lawyer, Tamar?

I was born and raised in Georgia, where I spent my childhood. I would assess it as a beautiful time – if not for the August War – which pushed me to determine ways of doing something useful to change the emotional reality beyond every person whose rights have been gravely violated. I was 12 or 13 years old when I decided to become a human rights lawyer. My greatest inspiration in choosing the legal profession was my uncle, after whose tragic death I thought that the most effective way to thank him for all the kind things he had done for the community he had lived in would be my dedication to help people have their rights defended.

My primary interest in my legal practice is to inspire change. This means that while being a strategic litigation lawyer, I can manage to contribute to demolishing the systemic failures surrounding the protection of the rights of the most vulnerable groups and evolve good practice, particularly in regard to torture, fair trial and equality cases.

What were your reasons for deciding to attend the 2019 Legal Skills Development Programme?

My major reason for attending the 2019 Legal Skills Development Programme was my desire to take a closer look at the Court proceedings. The cooperation with EHRAC has positively contributed to my working experience at GYLA, and prior to attending the LSDP I hoped that the programme would have the capacity to guide me in new and useful directions for my future work, and generally to find out about out-of-the-box perspectives on legal concepts. And it did so!

The LSDP kicked-off with an introductory training session on the implementation of Court judgments led by George Stafford and Anne-Katrin Speck from the European Implementation Network (EIN) and Clare Broan and Nadiia Zadorozhna from the Department of Execution of Judgments of the ECtHR (DEJ). What did you learn from them?

I found EIN’s introductory training on the implementation of judgments useful in regard to the tips they provided. In particular, the presenters provided useful information about the formal side of Rule 9 submissions – structure, timing and length – as well as the substantive evidence-based part. We also had the opportunity to discuss the importance of domestic level advocacy in regard to the execution of judgments before and after addressing them to the Committee of Ministers (CM).

For me, this training allowed me to see a broad picture of implementation of ECtHR judgments, the function of the CM and DEJ and, most importantly, the role of civil society advocacy. In other words, in cases of active participation through submitting well-substantiated Rule 9s before the CM, a positive change is often the outcome when the state at domestic level is reluctant to do so on its own initiative.

You also met Pablo Pushkar from the DEJ on the final day of the LSDP. What did you take from the meeting with him?

For me, the meeting with the representative from the DEJ was one of the most memorable, as it provided a logical continuation of the meeting with the EIN. The issues raised during the introductory training of the EIN were further addressed during this meeting, especially in regard to the process of the interpretation and execution of general measures envisaged in the judgments, as well as the importance of civil society participation in Rule 9 submissions. I had the opportunity to ask questions directly concerning the ongoing execution processes of the cases against Georgia – which I found very useful.

What about the meeting with the Commissioner for Human Rights Advisers?

The meeting with the Commissioner for Human Rights Advisers was interesting in the context of learning their mandate.

The fact that they are open to receive submissions from the civil society was an important point to take into consideration.

You also attended meetings with three of the Court’s registry lawyers, from Georgia, Armenia and Ukraine. What did you learn from them?

The meeting with the ECtHR registry lawyers was one of the useful parts of the programme. I had the chance to raise important questions in regard to the Court’s new procedure for friendly settlements. According to the Rules of Court, once an application has been declared admissible, the Registrar, acting on the instructions of the Chamber or its President, shall enter into contact with the parties with a view to securing a friendly settlement. Analysing how this rule is performed in practice regarding, for example, torture-cases, is important, as it is clearly established by the Court in its case-law that the damage that the torture victim has suffered cannot be compensated for solely by the payment of money. Thus, taking into account the respect for human rights as defined in the Convention, I had opportunity to express my concerns to the registry lawyer in regard with suggesting only monetary compensation (without indicating to the duty of investigation, or relevant general measures in need) in the friendly settlements and ask whether it is going to be a general practice.

As explored in this meeting, the lawyers explained how this new procedure is about to be examined, how it would work in practice and what consequences it would have more broadly. In this regard, to assist the process of evaluation of the practical outcome and future challenges of this new procedure, I think that the participation of the representative litigation lawyers will be important in the context of submitting their views to the Court.

What did you learn from the legal clinics with EHRAC lawyers Jessica Gavron and Kate Levine? What interested you the most about the clinic?

Legal clinics present good opportunities for experience-building and knowledge-sharing. For litigation lawyers like us, it is important to find every possible strategic value that the case could have. Since attending the LSDP in Strasbourg, I have been working on legal gender recognition case, which has been lodged before the ECtHR by GYLA and EHRAC in October, 2019. When I attended the LSDP, I had just started working on that case for ECtHR purposes, and the legal clinic with Jess and Kate helped me outline the important issues and discuss the strategy of litigating this case.

I also remember undertaking EHRAC capacity-building training in Autumn 2018, which I also found very interesting! Discussions and the exchange of arguments make it easier to see the strong and weak sides of the case. Thus, for me, the major interesting factor in legal clinics is this valuable interaction between lawyers, trying to find best possible solution while taking into account relevant counter-arguments.

Do you intend to do something differently in your work as a result of attending the 2019 Legal Skills Development Programme? If so, what?

The trainings enabled me to see the broad picture of the process of the execution of judgments. I intend to complete submissions under the Rule 9 in a manner that would be consistent with the issues covered during the trainings, as well as presenting the views to the Court in regard to the new practice of friendly settlements.

Would you recommend the LSDP to colleagues and peers?

The answer is definitely – yes! The LSDP gave me a lot of flashes of inspiration in regard to my cases, but not only those. Thus, I think that LSDP is useful to widen your knowledge, and also to see the broad picture of the importance of strategic litigation.

EHRAC Guide to Litigating ‘Article 18 cases’
Capacity Building
What does Article 18 cover, when and how should it be raised, how do…
Litigating self-defence in a domestic violence context: Interview with Mari Davtyan
Violence against women and girls Russia
EHRAC spoke to Russian lawyer Mari Davtyan about her work and recent participation in…
Training packages for human rights defenders
Capacity Building
EHRAC is developing a series of new training resources, specifically designed to be used…
Join our newsletter
SIGN UP