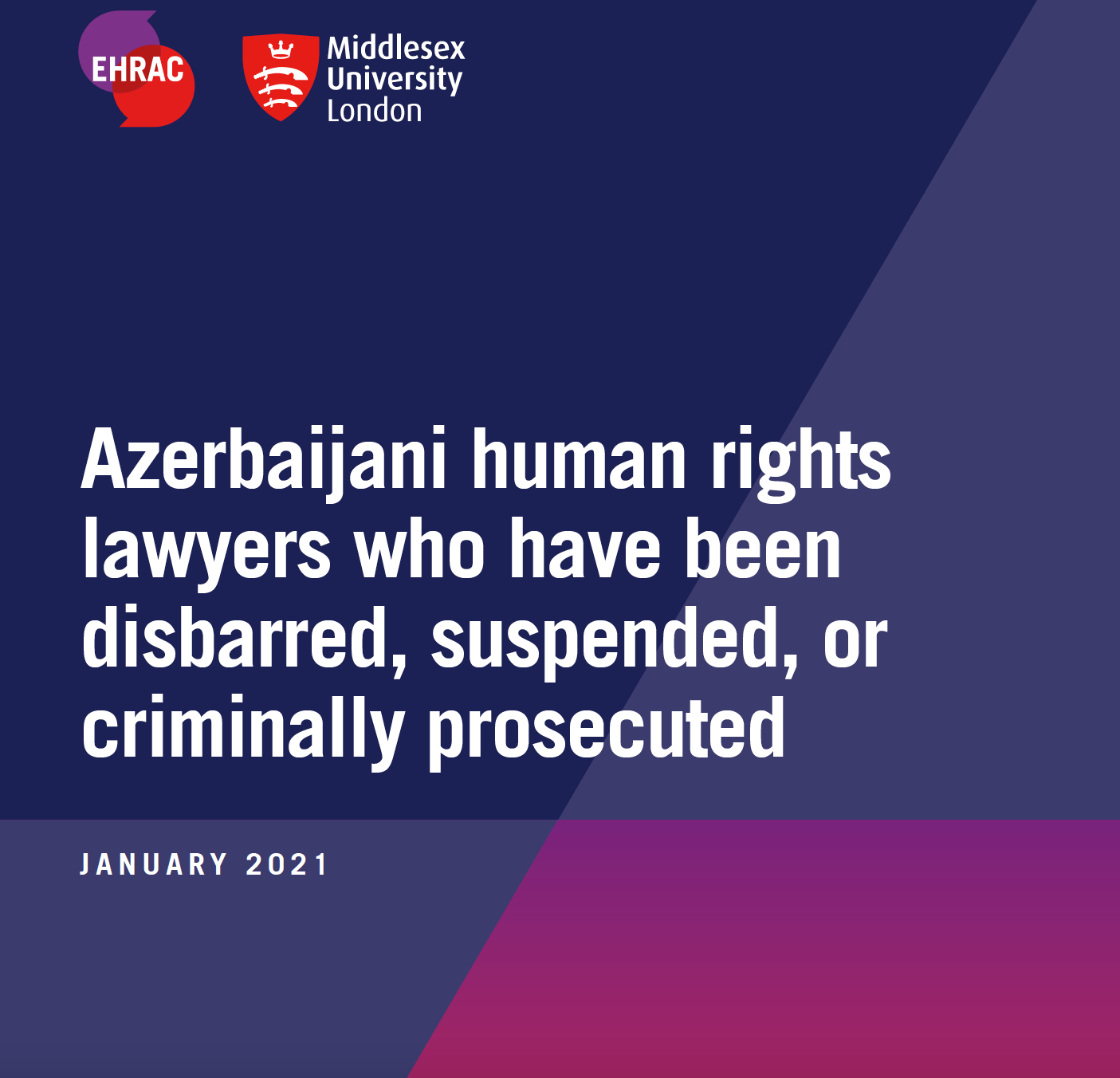 This list has been compiled by the European Human Rights Advocacy Centre (EHRAC) on the basis of publicly available reports from international human rights organisations and information from partner lawyers in Azerbaijan.

Download the list
In the years following the 2014 crackdown on civil society in Azerbaijan and the criminal prosecution of NGO and human rights defenders, human rights lawyers who took up these and other ‘politically sensitive’ cases have been subjected to severe retaliation by the authorities, which has sometimes resulted in the suspension of their licences and even disbarment.

Disciplinary proceedings have been brought against human rights lawyers in response to their legitimate exercise of the right to freedom of expression: for publicising human rights violations perpetrated against their clients in detention, or for disclosing instances of the abusive administration of justice in their clients’ cases. As a result, over a dozen Azerbaijani lawyers have been deprived of the opportunity to practise their profession, and over two dozen have been targeted by the Azerbaijani authorities since 2005.

In January 2020, in its first case relating to the disbarment of a lawyer in Azerbaijan, the European Court of Human Rights (European Court) found a violation of the right to a private life (Article 8 of the European Convention on Human Rights) in the case of Elchin Namazov, who was disbarred in the absence of adequate procedural safeguards in disciplinary proceedings brought against him. The Court found that the domestic courts had failed to assess the proportionality of the sanction.[1]

Khalid Bagirov is another prominent human rights lawyer who was first suspended in 2011 after he made comments about the suspicious death of his client in police custody. He was later permanently disbarred in 2015 for criticising Azerbaijan’s judicial system during a trial which concerned a domestic court’s failure to implement the European Court’s judgment in the case of Ilgar Mammadov, an opposition politician whose arrest was found to be politically motivated.

In June 2020, the European Court ruled that Azerbaijan’s suspension and disbarment of Bagirov was in breach of his freedom of expression (Article 10 of ECHR) and right to a private life. The Court ordered the Azerbaijani Government to ensure the “maximum possible reparation” for Khalid Bagirov, “and [that] they should put the applicant, as far as possible, in the position in which he had been before his disbarment.”[2]

In a report published in December 2019 following her visit to Azerbaijan earlier that year, Council of Europe’s Commissioner for Human Rights, Dunja Mijatovic, expressed concern about “the use of disciplinary measures on improper grounds, such as expressing critical views”, as well as “the lack of clear criteria for the imposition of disciplinary sanctions, in particular disbarment.”[3] Accordingly, disbarred human rights lawyers are prevented from continuing their human rights defense work. Such measures taken against human rights lawyers have a deterrent effect on members of the ABA, as well as on other prospective lawyers.[4]

Following amendments to the Law on Lawyers and Lawyers’ Activities and the Code of Civil Procedure in November 2017, lawyers who are not members of the Azerbaijani Bar Association (ABA) can no longer represent clients in domestic courts.[5] Many human rights lawyers who were previously independent of the ABA have faced de facto disbarment through non-admission to the Bar. The Council of Europe’s Commissioner for Human Rights has previously noted that the ABA’s non-admission to the Bar of certain categories of persons, particularly lawyers working on sensitive human rights issues or those with an NGO background, “points to a deficit of institutional independence.”[6] Concern has also been raised by the UN Special Rapporteur on the Independence of Judges and Lawyers and the International Commission of Jurists (ICJ).[7]

In November 2020, EHRAC submitted a case to the European Court of Human Rights on behalf of five Azerbaijani human rights lawyers who claim that they were arbitrarily denied access to the Bar.

[5] Commissioner for Human Rights of the Council of Europe, Dunja Mijatovic, Report following her visit to Azerbaijan from 8 to 12 July, para 56, https://rm.coe.int/report-on-the-visit-to-azerbaijan-from-8-to-july-2019-by-dunja-mija/168098e108.

[7] https://www.ohchr.org/Documents/Issues/IJudiciary/Communications/OL-AZE-1-2018.pdf; ICJ Recommendations to the Azerbaijan Bar Association on the Role and Independence of Lawyers 2019 https://www.icj.org/wp-content/uploads/2019/05/Azerbaijan-ICJ-Recommendations-Bar-Ass-Advocacy-Analysis-Brief-2019-ENG.pdf

Azerbaijan found responsible for death of Armenian man who was tortured in detention
Abuses by security forces and law enforcement Armenia Azerbaijan
Content warning: descriptions of extreme violence and torture The European Court of Human Rights…
Nemat Kerimli and Asabali Mustafayev
Repression of civil society Azerbaijan
On 23 April 2018, the ABA issued a decision to suspend the licences of…
Irada Javadova
Repression of civil society Azerbaijan
Irada Javadova is a human rights lawyer who was involved in many resonant cases,…
Join our newsletter
SIGN UP