People keep disappearing – it is time for Russia to take responsibility

It is everyone’s worst nightmare – the disappearance of a family member. We would expect the police to help find them. But what if they were seemingly ‘disappeared’ by the State authorities themselves? The European Court of Human Rights is the last resort for distraught families, some of whom have been waiting for more than a decade to find out the fate of their loved ones.  EHRAC (based at Middlesex University in London) and Memorial Human Rights Centre represent the families of Salikh Saidov and Omar Valibagandov, whose cases were communicated by the Court to the Russian Government for their response on the 16 May 2018.

How did Salikh and Omar ‘disappear’?

Thousands of enforced disappearances have plagued Russia’s North Caucasus region for more than two decades. This group of cases, which the Court has joined to consider them as a group, questions the disappearances of thirteen people since 2005, last seen in the custody of the police or the secret services, including Salikh and Omar.

Salikh moved to Moscow from Makhachkala (Dagestan) in 2004, at the age of 26. In July 2005, three of Salikh’s friends informed his mother that they had been arrested with her son in Moscow. They were released, but Salikh was not. His mother found out from officials that Moscow police officers detained Salikh following a request from the Dagestani investigator, and he was taken for questioning in Makhachkala. This was denied by the Dagestani authorities, who also denied that a criminal case had been opened against him. His mother believes that, following his detention by the Ministry of the Interior in Makhachkala for 3 days, he was transferred to Grozny, Chechnya.  He remains missing. 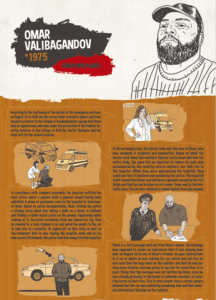 Omar Valibagandov’s story was featured in an exhibition by People in Need, called Stories without endings. (http://bezkonce.com/)

On the morning of 22 August 2013, Omar left his friend’s flat to go to work. Shortly afterwards he stopped answering his mobile phone.  At about 6pm, he was taken by a group of officers from the Federal Security Service to the Karabudakhkent Central Hospital with a gunshot wound from a rubber bullet to the thigh. He was then transferred to Izberbash hospital, handcuffed and under surveillance. In the hospital, during the removal of the bullet, Omar told the doctors that he had been beaten, shot and abducted by the law-enforcement officers. Shortly after he was taken driven away in a police car and has not been seen or heard from since.

The investigations into all thirteen disappearances are still pending, even though over a decade has passed since Salikh was last seen, and it has been five years since Omar’s disappearance. Their relatives have used every avenue for redress available to them – appealing to the official Russian authorities, taking their cases through the courts, and seeking help from NGOs and human rights organisations – to no avail. The fates of the disappeared men remain still unknown.

Why should the Russian authorities be held responsible for their disappearances?

These cases concern some of the most fundamental human rights – the right to life, right to liberty and prohibition of inhuman and degrading treatment.  We argue on behalf of Omar and Salikh’s families  that State agents are responsible for their relatives’ abduction and subsequent disappearance, and that the authorities have failed to carry out an effective investigation, under Article 2 of the European Convention on Human Rights (ECHR). On behalf of Omar’s brother, we further argue that the State failed to take steps  to protect Omar’s right to life (Article 2 ECHR) and that he was ill-treated by his abductors (Article 3 ECHR). We claim on behalf of both families that they have endured mental suffering on account of their relatives’ disappearances because of the authorities’ indifference to their requests for help (Article 3 ECHR), and that their relatives’ unlawful detention violated their right to liberty (Article 5 ECHR). In light of the still pending investigations, we also invoke the right to an effective remedy (Article 13 ECHR), as the applicants have had no meaningful recourse to justice.

Enforced disappearances remain a critical issue in contemporary Russia. During the Chechen wars of 1994-96 and 1999-2000, the Russian Security services were routinely responsible for enforced disappearances, carried out under the guise of so-called security operations. Estimates vary substantially, however Memorial HRC estimate that 3000-5000 people were disappeared between 1999 and early 2005, giving Russia “the inglorious distinction of being a world leader in enforced disappearances”. Victims’ relatives have no access to effective remedies at the domestic level – and therefore no redress. In other cases, the European Court has delivered an important measure of justice to thousands of victims and their families, finding Russia responsible for violations of the right to life in over 250 cases from the NC between 1999 and 2006 (including many disappearance cases), and awarding over €20 million in moral compensation since 2005.

None of the 13 disappearances in this group are ‘historic’, having taken place between 2005 and 2014, and most of the investigations are still pending. The trend has wider regional repercussions, and has seen a resurgence in recent years. In July 2017, for example, reliable reports emerged that dozens of men had been detained in Chechnya between December 2016 and January 2017, and that at least 27 of them were subsequently executed. The practice of enforced disappearances in North Caucasus, especially in Chechnya, is used to persecute and intimidate certain social groups, beyond those suspected – with or without factual basis – of connections to radical or illegal armed groups. Several waves of torture and killings of LGBT people in Chechnya were also widely reported by international media since autumn 2016.