In May 2015, EHRAC organised our annual Legal Skills Development Programme (LSDP) in Strasbourg to which we invited nine lawyers from Russia, Georgia, Armenia and Ukraine. We used this as an opportunity to talk to our partners and representatives from the Council of Europe (CoE) about their experiences of working with us at all stages of the litigation process at the European Court of Human Rights.

More about this video

EHRAC has been working with partner lawyers from the former Soviet Union to bring cases of human rights violations to the European Court since 2003. As EHRAC Director Philip Leach explains:

Since we’ve started, we’ve successfully litigated 100 cases to judgment in Strasbourg and we have more than 200 other cases pending, and an ever increasing caseload because of cases from Ukraine, but also other cases from Russia and the South Caucasus states. 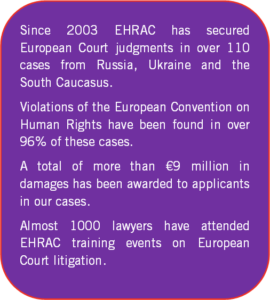 This year the LSDP focused on the implementation of European Court judgments, which presents considerable challenges in the countries concerned, as well as procedural aspects of lodging a case. Participants met with senior officials from across the various bodies of the CoE, including the Parliamentary Assembly (PACE), the Committee of Ministers, European Court Judges and Registry Lawyers.

Ganna Yudkivska, the Ukrainian Judge at the European Court, interviewed in the video, explains that she was herself a member of various NGOs, and so fully understands the importance of meeting NGO representatives and lawyers, who will raise certain issues on behalf of victims of human rights violations. Although our participating lawyers from Ukraine are well acquainted with Ms. Yudkivska, they found that meeting with her at the Court was an opportunity to ask for advice on specific issues.

During the LSDP, the participants attended a Grand Chamber hearing in the case of A.B. v Switzerland, which concerned the conviction of a journalist for disclosing confidential information from a judicial investigation. The hearing allowed participants to observe different advocacy styles, and provoked discussion about the presentation of the case. One participant, Sergey Zayets from the Regional Centre for Human Rights, commented:

However experienced you are, the first time you attend a hearing at the European Court, you are in awe at being there, impressed by the silence as the judges enter, and the general solemnity of the proceedings. The second time, you are able to concentrate more and listen to the content of the case. This was my third visit and only now was I able to analyse the pleading as a professional and put myself in the shoes of the lawyers. I now feel more prepared, were I to plead my own case in Strasbourg. I would not feel intimidated during the hearing, would be able to use the right tone and speak with confidence to the judges.

Building the capacity of our partner NGOs has always been a core part of how we operate. We work closely on applications to the European Court, discussing each case’s strategic value and constructing the legal argumentation. We then advise on draft applications and provide further advice and guidance at all stages of the case. Keti Shubashvili, a lawyer at the Georgian Young Lawyers Association, has been working with EHRAC for a number of years: “It always seems like there are up to fifty lawyers [at EHRAC], because they are always helpful and help us with certain legal issues.” We have recently started working with the Ukrainian Helsinki Human Rights Union (UHHRU), focusing in particular on cases arising out of the conflict in eastern Ukraine. Oleg Veremenko, who is working on UHHRU’s Prisoners of War project, told us:

During the LSDP, we organised a meeting with Grigory Dikov, a former European Court Registry lawyer who is now working at the Venice Commission. He explained the value of meetings such as this, “The Venice Commission is doing constitutional law. We are lawyers, and we prefer meeting lawyers.”  Judge Yudkivska also highlighted how these meetings can be beneficial. “It helps us to raise the problem, to show the problem from different perspectives, and to issue a judgment which is extremely valuable for the relevant state and relevant society.”

Challenging impunity for human rights violations does not end when a judgment is issued. We also recognise that following through on the cases is important. We take steps to ensure that governments take the measures that they need to. to make sure that these violations do not take place again. As Frank Power, from the Permanent Representation of Ireland to the CoE, explained:

Most recently, the CoE launched a project on “Strengthening the independence, efficiency and professionalism of the judiciary in Ukraine”, making specific reference to the execution of the judgment in Volkov v Ukraine, in which Judge Oleksandr Volkov was unfairly dismissed from the Supreme Court of Ukraine. Mr. Volkov was represented by EHRAC in his case before the European Court, which issued a landmark judgment ordering his reinstatement.

Moreover, we have been exploring other international mechanisms which can contribute to long-term systemic change. In April 2015, we piloted our first webinar on Protecting Women’s Human Rights, focusing on using UN mechanisms including the Committee on the Elimination of Discrimination Against Women and the Special Rapporteur on Violence Against Women. Keti also attended the webinar: “[EHRAC guidance] has provided us with several international instruments other than the European Convention, so we can substantiate our requirements in a better way.”

Professor Leach co-founded EHRAC in 2003, with the vision that every person in the former Soviet Union has a voice, access to justice, and can hold their state to account over human rights violations. He explains:

At the heart of what we’re trying to do is secure justice for some of the most vulnerable people on the continent, and to challenge impunity.