From 5 to 8 March 2018, twelve lawyers from Armenia, Azerbaijan, Georgia, Russia and Ukraine joined the EHRAC team for our annual Legal Skills Development Programme (LSDP) in Strasbourg. Our group this year was the largest ever, consisting of lawyers at varying stages in their legal careers, with different levels of experience litigating cases before the European Court of Human Rights. Attendees included representatives from EHRAC’s newest partner organisation, the Regional Centre for Human Rights, as well as five lawyers from Azerbaijan. 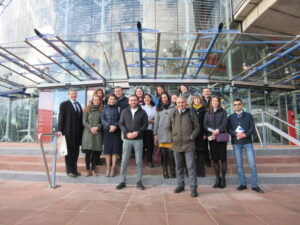 LSDP participants outside the ECtHR

The aim of the Programme is to bridge the gap between lawyers from the farthest reaches of the Council of Europe region and key officials from its principal bodies, including the European Court. Participants are able to discuss with them the particularities of litigating European Court cases and seeking implementation of judgments.  It also aims to improve participants’ knowledge of how the different organs of the Council of Europe function and to allow them to exchange information with officials regarding national and regional issues. They met officials from the Parliamentary Assembly of the Council of Europe (PACE), the Department for the Execution of Judgments, the Commissioner on Human Rights’ office, the Committee of Ministers, European Court Judges, and Registry Lawyers.

For one LSDP participant, the motive for taking part was

“to enhance my professional skills and also due to high skills and feedback of those of my colleagues, who have already taken part in this programme.” 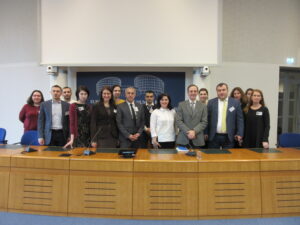 EHRAC conducted discussions with two Court Judges: Judge Dedov (Russia) and Judge Lemmens (Belgium), who provided both a regional perspective and a more general outlook on current issues. The Judges answered questions from the lawyers on a broad range of issues including: claiming for non-pecuniary damages; the Court’s approach to cases involving multiple human rights violations; the emerging case law concerning politically motivated proceedings (under Article 18 of the European Convention on Human Rights (ECHR)), which is highly significant for participants from our target region; procedural issues; the use of expert evidence; and applying for Interim Measures (under Rule 39 of the Court’s Rules). One participant commented that the Judges “provided detailed and exhaustive answers” to their questions. Another, who had not met any Court Judges before, noted: “they shared their experiences so I think that these meetings were the best to understand how the Court works”. 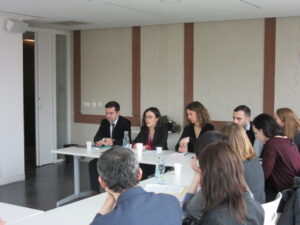 We also held meetings with three of the Court’s Registry Lawyers, from Azerbaijan, Armenia and Georgia. This was a unique opportunity for the participants to receive specific, regionally-focussed advice. Between them, the Registry lawyers responded to questions relating to applicants’ requests for priority treatment and the important issue of complying with the Court’s strict admissibility criteria (including exhaustion of domestic remedies, calculating the six month time-limit and considering when a domestic investigation is ineffective). They also provided an insight into the internal workings of the Court on substantive issues, such as the Court’s move towards adopting a project-based approach on cases raising systemic problems including ill-treatment in custody, pre-trial detention, freedom of association/expression and expropriation.

“The meetings with the Registry lawyers were especially useful; in terms of these meetings we managed to learn many technical and other details of operation of the Registry.”

Human Rights Implementation: Meeting the Committee of Ministers (CM), the Parliamentary Assembly of the Council of Europe (PACE), the Department for the Execution of Judgments (DEJ), and the Office of the Commissioner for Human Rights 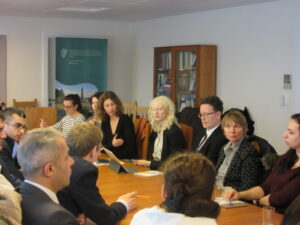 Participants meet representatives from the CM

Participants met representatives from the CM (the body charged with overseeing the implementation of judgments), asked questions and presented information relating to current cases under the CM’s supervision.  The lawyers were encouraged to make submissions updating the CM on steps taken by their States to implement specific judgments (known as Rule 9.2 submissions), to assist them in scrutinising States’ progress towards fulfilling their obligations under the ECHR.

In addition, participants met Pavlo Pushkar (Head of Division, DEJ) and Yulia Gendlina (Legal Officer, DEJ), who support the CM in supervising States’ implementation of judgments. They advised on best practice in making Rule 9.2 submissions, how the DEJ tracks States’ non-payment of compensation, the possibility of execution of judgments in cases arising from conflict, along with the non-implementation of cases relating to pre-trial detention. 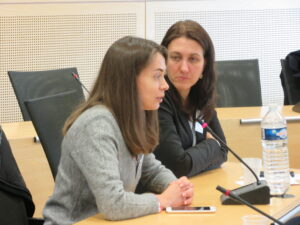 A participant poses a question to Pavlo Pushkar, the Head of Division at the DEJ

Following his short presentation on the Committee’s role and current priorities, Günter Schirmer, Head of the Secretariat to the Committee of Legal Affairs and Human Rights (CLAHR), encouraged participants and members of civil society to submit information to the CLAHR in order to inform the 45 reports currently in preparation. A participant commented that this session

“provided detailed information regarding the problems encountered by the PACE during its work.” 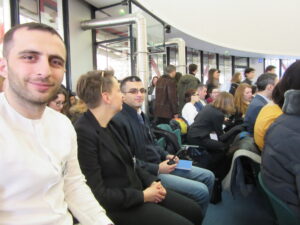 Participants attended the Grand Chamber hearing in Fernandes de Oliveira v Portugal, which concerned the suicide of a patient in a psychiatric hospital. Participants heard legal submissions by representatives of the patient’s mother and the Portuguese government, questions from the Court and the representatives’ replies.  This was an excellent opportunity to see oral advocacy in action. Following the hearing, participants discussed the case with EHRAC lawyers, expressing a wide range of views on the strength of the parties’ arguments, the persuasiveness of their advocacy, and how effectively they responded to the judges’ questions and to their opponent’s submissions. A participant commented that

“It was incredibly useful and very interesting.”

It was many of the participants’ first time at a Grand Chamber hearing; one participant said

“I felt what the applicant’s representatives feel there. It was great experience.”

“the best part for me was visiting the Grand Chamber and then discussing the case in the group.”

At a number of legal clinics during the Programme, participants also had the opportunity to discuss their own cases with EHRAC’s lawyers, many of which are being jointly litigated with EHRAC. This valuable guidance from legal professionals with many years’ experience litigating before the Court is always appreciated by the participants.

“It was a very interesting week during which our partner lawyers were able to raise pressing regional issues with the Judges and lawyers of the Court, as well as with other key CoE institutions. Of particular concern this year were important questions relating to the Court’s approach to Article 18, reflecting the increasing use of politically motivated proceedings in the region, and how to most effectively argue that violence against journalists should be recognised as a violation of freedom of expression. We hope that these discussions were valuable for all involved.”