From 7 to 10 March 2017, nine lawyers from across Russia, Georgia, Armenia, Azerbaijan and Ukraine joined the EHRAC team for our annual Legal Skills Development Programme (LSDP) in Strasbourg. Participants comprised lawyers from varying stages in their legal careers, ranging from senior lawyers with substantial experience of litigating before the European Court of Human Rights to emerging human rights lawyers.  Those participating demonstrated the breadth and depth of EHRAC’s partnerships, coming from some of EHRAC’s oldest and newest partner organisations, and including lawyers litigating newer strands of EHRAC’s work such as minority and women’s rights cases.

The Programme provided for participant-led high-level meetings with a broad range of senior Council of Europe officials, enabling participants to raise and discuss the issues they encounter when litigating cases and seeking redress for victims of human rights violations on a daily basis.  Participants met European Court Judges and Registry Lawyers, as well as officials from the Parliamentary Assembly of the Council of Europe (PACE), the Department for the Execution of Judgments (DEJ), the Committee for the Prevention of Torture (CPT) and the Commissioner for Human Rights’ office.

“It was a dream come true to go to Strasbourg and see how the Court worked.”

Kristina Gevorkian, Foundation Against the Violation of the Law (Yerevan, Armenia) 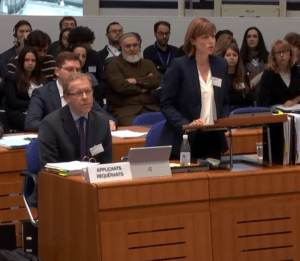 A highlight of the LSDP for many of the participants was their attendance at the Grand Chamber hearing in the case of Merabishvili v Georgia, at which EHRAC lawyers and Georgian partners represented the applicant.  The case concerns whether the arrest and pre-trial detention of former Prime Minister of Georgia in the run up to the Presidential elections were politically motivated.  The participants heard arguments from lawyers for the applicant and the Government, the Judges’ questions and the parties’ replies. Afterwards EHRAC staff facilitated a debrief on the legal issues raised, the representatives’ differing advocacy styles, the questions raised by the Judges, procedural matters and the strategic value of the case.

Participants met Judges Lemmens (Belgium) and Eicke (United Kingdom) and “particularly appreciated the insights of judges” (Mariam Begadze). Judge Eicke provided an overview of how the judges operate in practice, the process by which judgments are agreed, the role of Juge-Rapporteurs and the interaction between judges and Registry lawyers. Participants had lively and informative discussions with both judges about a variety of substantive and procedural matters including advocacy at an oral hearing, the value of comparative legal material in written submissions, exhaustion of effective domestic remedies, the Court’s approach to specifying general measures and its emerging case law on hate crime.

“The role of lawyers like you is so important for defending human rights and victims.” 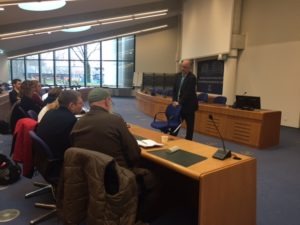 EHRAC also facilitated meetings with three of the Court’s Registry Lawyers from Azerbaijan, Georgia and Russia (Vugar Fataliyev, Georgi Badashvili and Olga Chernishova). In addition to providing a snapshot of the Court’s current caseload and statistics for 2016, the Registry Lawyers offered practical advice on friendly settlements and unilateral declarations, witness statements, compliance with the 6 month time limit and requests for extensions of time for lodging submissions. The lawyers outlined the Court’s approach to similar cases, including where there is already well-established caselaw (WECL cases) and its project-based approach to considering similar cases raising new issues, currently being piloted in the Russian and Azerbaijani sections.

“Something I will take back with me is that the Judges and lawyers are more flexible than they seem and this gives us encouragement to break new ground. I think there are more opportunities before the Court than I had thought and that gives us the opportunity to bring really exciting cases.”

Meetings with the Department for the Execution of Judgments, PACE, the Committee for the Prevention of Torture and the Office of the Commissioner for Human Rights

Guenter Schirmer, Head of the Secretariat of the PACE Committee of Legal Affairs and Human Rights (CLAHR), hosted a session during which he explained the Committee’s role and main working methods, as well as how best for lawyers and civil society to input into its work. He highlighted recent PACE reports and ongoing work of relevance to the participants, including on pre-trial detention, the abuse of Interpol Red Notices, political prisoners, and the human rights situations in the North Caucasus, Azerbaijan and Ukraine.  In addition, he drew attention to CLAHR’s role in vetting the lists of ECtHR judges proposed by States and its support in seeking to unblock impediments to implementation of the Court’s judgments. 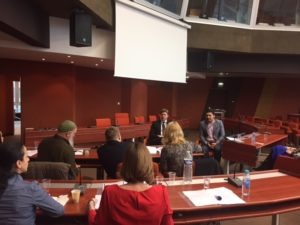 Advisers to the Commissioner for Human Rights talk to participants

Participants also held an informative meeting with Advisers to the Commissioner for Human Rights (Furkat Tishaev and Andrzej Mancewicz).  During their presentation, the advisers outlined the Commissioner’s principal methods of work, his current priorities and his interaction with lawyers and civil society, emphasising the role of the Commissioner as third party intervenor in ECtHR cases raising a systemic problem, such as attacks on human rights defenders and lawyers.  In discussion, amongst other subjects, participants raised the recent decriminalisation of domestic violence in Russia, upcoming country visits and the tools available for the Commissioner to address non-implementation of his recommendations.

For the first time in an LSDP, EHRAC organised a meeting with the Secretariat of the CPT.  Having noted the aims, principles and work of the CPT, Johann Friestedt (Head of Division, CPT) discussed with participants the range of places of detention monitored by the CPT, the publication of reports, its use of ad hoc visits to address particular issues, the role of civil society, implementation of CPT recommendations and rare public statements by the CPT.

In their final meeting, participants met Pavlo Pushkar, legal advisor at the Department for the Execution of Judgments.  He outlined the role of the DEJ and the assistance that NGOs and lawyers provide to the process before the Committee of Ministers by making written submissions on the state of implementation of individual cases. Responding to questions, he addressed payment of just satisfaction claims, infringement proceedings, the effectiveness of domestic remedies, the DEJ’s scrutiny of information provided to it and its use of outside expertise where appropriate.

“It was a pleasure to spend time with our partners and meet some new lawyers with whom we hope to work. The participants were particularly engaged, asking interesting and challenging questions. We are delighted that, as they report, they have become more confident in their abilities and are looking forward to litigating new areas of law as a result of this training.”

Feedback
We received very positive feedback for the LSDP, as well as some suggestions for the future. Below are some examples from the participants: