From 29 February to 3 March, eight lawyers from across Russia, Georgia, Armenia, Azerbaijan and Ukraine joined the EHRAC team for our annual Legal Skills Development Programme (LSDP) in Strasbourg. Participants comprised lawyers from varying stages in their legal careers, ranging from senior lawyers with substantial experience of litigating before the European Court of Human Rights to emerging human rights lawyers.  Attendees included representatives from some of EHRAC’s oldest and newest partner organisations, such as the Georgian Young Lawyers’ Association (GYLA) and the Ukrainian Helsinki Human Rights Union (UHHRU).

The Programme provided for high level meetings between participant lawyers and senior Council of Europe officials in order to enable participants to raise and discuss the issues they encounter when litigating cases before the European Court or seeking implementation of the Court’s judgments, and to learn about the specific functions of the different organs of the Council of Europe and the interaction between them. For instance, Tamar Abazadze from GYLA applied to take part in the LSDP “to gain greater knowledge regarding the implementation of European Court judgments” and saw it as “a good opportunity to put forward questions [to] see how everything works in practice.” Participants met with officials from the Parliamentary Assembly of the Council of Europe (PACE) and the Committee of Ministers (CoM), the Commissioner on Human Rights’ office, European Court Judges, and Registry Lawyers. 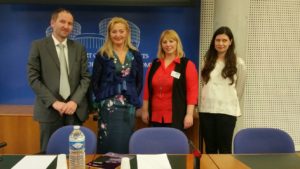 Participants met with Judge Yudkivska (Ukraine), Judge Tsotsoria (Georgia), and Judge Nuβberger (Germany). Judge Nuβberger is the President of Section V which considers cases against Azerbaijan and Ukraine, amongst others.  At the outset of her session, she noted:

She explained the Court’s approach to applications for Interim Measures (under Rule 39 of the Court’s Rules) and third party interventions; single Judge decisions; and discussed how cases are prioritised for Chamber and Grand Chamber judgments. Judge Yudkivska commented that:  “What you do as NGOs helps us and you do a fantastic job, not just for your States, but also in building case law.”  She responded to participants’ questions on the evolution of certain articles of the European Convention on Human Rights, the particular challenges for vulnerable victims in exhausting domestic remedies, for instance in cases of discrimination due to gender or sexual orientation, or detainees subjected to ill-treatment. She also offered guidance on issues relating to Friendly Settlements, Unilateral Declarations and correcting Court errors.  Akhmed Gisayev, a prominent human rights lawyer from Chechnya and Director of the Human Rights Analysis Centre in Oslo, commented that the discussion was lively, detailed and nuanced. 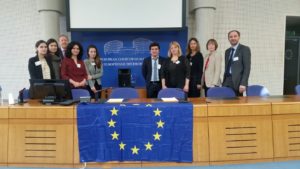 We also facilitated meetings with four of the Court’s Registry Lawyers, from Russia, Ukraine and Georgia. The Registry Lawyers provided very practical advice on common errors that lead applications to be found inadmissible, and, among many other topics, discussed time limits, victim status and the challenges in arguing that there are no effective domestic remedies. Olga Chernishova, one of the Russian lawyers of the registry, explained:

“I find it stimulating to meet with such interested and determined professionals as this group, and the questions provide valuable feedback of the problems you face.”

Nadia Volkova (UHHRU) told us that she was delighted to have the opportunity to clarify points on procedure and to get answers to her specific questions.

Human Rights and Implementation: Meeting the Committee of Ministers, PACE and the Office of the Commissioner for Human Rights 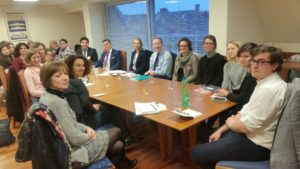 In a meeting with the CoM, the body charged with overseeing the implementation of judgments, participants briefed the ten State Representatives on significant cases from their countries, and were asked to provide further information and specific evidence, in order to enable the CoM to question the respondent Government on case progress. The Representatives gave advice as to how to contribute most effectively to CoM consideration of particular cases. As a result of the meeting, one participant remarked: “I will prepare submissions to the CoM as a priority.” Frank Power, the Deputy Permanent Representative of Ireland to the Council of Europe, who generously hosted the meeting, told us that “the work of EHRAC has been hugely important” for CoM Human Rights meetings.

Andrew Drzemczewski, Head of the Secretariat of the Committee of Legal Affairs and Human Rights (CLAHR), PACE, hosted a session during which he explained the Committee’s role and multiple working methods as well as how best for lawyers and civil society to input into its work. The meeting was also attended by Guenter Schirmer (Deputy Head, CLAHR). They directed the participants to sources of further information that might be useful. Specific issues were discussed including administrative detention, the human rights situation across the region, legal remedies and implementation of judgments.

We also held an interesting meeting with Advisers to the Commissioner for Human Rights on Russia, Ukraine, Armenia, Georgia and Azerbaijan (Furkat Tishaev, Olena Petsun, Christine Mardirossian and Alessandra Ricci Ascoli). They discussed with participants the areas in each country that have been prioritised by the Commissioner’s office and the reporting process.  The lawyers were encouraged to email them with specific information on particular issues, to contribute to both the prioritisation and reporting process. 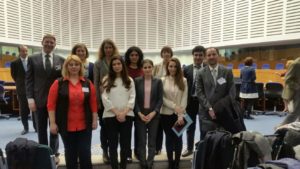 The participants attended a Grand Chamber hearing: the case concerned the restitution of a Church originally belonging to the Greek Catholic Church which was transferred to the Orthodox Church under the totalitarian regime in 1967, and the question of the application of a special law to determine the legal status of such property.  The participants heard arguments from the applicant and the Government and also the Judges’ questions and the parties’ replies. Afterwards we held a debrief discussion of the legal issues raised and the differing advocacy styles of the legal representatives. Eteri Gvritishvili, a lawyer at the Georgian NGO “Human Rights Education and Monitoring Centre” (EMC) found this to be “the most valuable experience for me, as the case concerned the topics that EMC works on.” For Lusine Ghazaryan, a lawyer at PINK Armenia, the hearing provoked “new thoughts on how the presentation and argumentation should be the essence of the case”.

“Our partner lawyers conduct human rights litigation in their own countries, far removed from the Court and often in challenging circumstances. The LSDP provides an opportunity for them to gain insight into the Court’s procedure and to meet and raise the issues they encounter with the relevant CoE officials. We hope that these meetings are valuable for all concerned.”

We received very positive feedback for the LSDP, as well as some suggestions for future training sessions. Below are some examples from the participants.

“Personally, for me, one of the interesting parts was attending the Grand Chamber hearing, because the case was quite similar to the Georgian situation.”

“As we plan to lodge several applications to the European Court, the knowledge that I’ve got here could be adequately used in our practical work. Also this will be helpful during litigation before the domestic courts.”

“It was very interesting to hear inside information from judges from Ukraine and Germany. I got answers to questions deriving from my pending cases.”

“I will try to contact the Office of the Human Rights Commissioner from time to time to update them about current circumstances.”

“My expectations mostly included skills on implementation of European Court judgments, but the overall programme was very productive also from the perspective of submitting applications, trends of the Court, opinions from judges and, most valuably, meeting colleagues and the EHRAC team in person.”

“I will apply and use the new lobbying tools.”