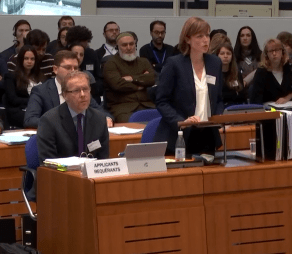 “The Grand Chamber has paved the way for individual victims of politically motivated detentions and prosecutions across Europe to challenge state abuse of power more effectively. This is a landmark judgment resetting the Court’s case law on politically motivated proceedings. As we argued during the hearing in March 2017, it is frequently impossible for a person to directly prove that the aim of their detention or prosecution is political. Today the Court held that it will closely scrutinise the explanations of States and draw inferences from indirect evidence, as it has done in Mr Merabishvili’s case.”

Today the Grand Chamber of European Court of Human Rights reiterated that there were political motivations behind former Prime Minister and Interior Minister Vano Merabishvili’s extended pre-trial detention, and it was misused to exert pressure on him.  He is represented by the European Human Rights Advocacy Centre (EHRAC, Middlesex University, London) and Otar Kakhidze (Georgia).

What happened? Mr Merabishvili was arrested and detained in May 2013. In December 2013, he was taken from his Tbilisi prison cell in the middle of the night, and, with his head covered, was driven to an unknown destination where he was questioned by the Chief Public Prosecutor and the head of the Georgian prison service.  They offered Mr Merabishvili a ‘deal’: to provide information about former President Mikheil Saakashvili, and the death of former Prime Minister Zurab Zhvania, in exchange for a guarantee that he would be released and allowed to leave the country with his family. He refused to comply and was threatened with worsening prison conditions. He was convicted and sentenced to five years’ imprisonment shortly afterwards.

What does the Court say? Although the charges on which Mr Merabishvili was originally arrested were reasonably based, the incident in December 2013 signalled that his continued pre-trial detention was used for a reason other than those specified, in violation of Article 5 of the European Convention on Human Rights (ECHR). His detention was no longer justified, and was used to exert pressure on him, in violation of Article 18 ECHR, the object and purpose of which is “to prevent the misuse of power”. It highlighted that crucially, the Grand Chamber believed Mr Merabishvili’s account of what happened to him on 14 December 2013 – when he was hauled out of his cell – which the Georgian government flatly denied ever occurred.

Why is this important? Mr Merabishvili is just one of a growing number of people across the former Soviet space subjected to politically motivated detention and prosecution (for example, Yulia Tymoshenko, Yuriy Lutsenko, Rasul Jafarov). Such practices are fundamentally undemocratic and a serious misuse of power. Today’s judgment shows that governments will be held to account for their actions.

What next? The finding of political motivation by the European Court carries such weight that there is an onus on the authorities to investigate misuse of power and if necessary to reopen the criminal proceedings and quash the conviction.