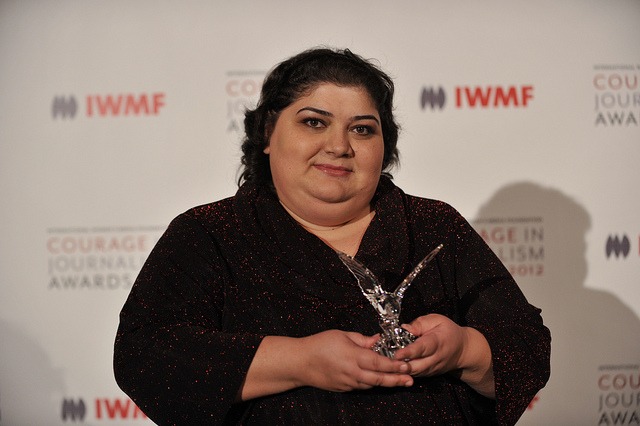 “The Azerbaijani government wants to deceive the world by freeing me from prison, while my freedoms remain limited even out of jail. I can’t travel, I can’t be contracted by foreign media outlets. I am just one of many journalists banned from leaving the country, because the Government thinks that journalists should not exercise their freedom of expression, or make use of media opportunities outside of their oppressive regime.”

On 16 June 2017, internationally acclaimed investigative journalist Khadija Ismayilova challenged the travel ban imposed on her by the Azerbaijani Government at the European Court of Human Rights. Khadija argues that the travel ban following her conditional release from prison in May 2016 is intended to hinder and punish her for her high-profile journalism (which in the past has included cross-border investigations into the Azerbaijani president and his family) and is part of her systematic persecution by the authorities. The case was rapidly communicated by the European Court on 11 September 2017, highlighting the systemic nature of the repressions faced by journalists. We submitted our reply to the Government’s observations on 18 April 2018. Khadija is jointly represented by Azerbaijani lawyer Fariz Namazli and the European Human Rights Advocacy Centre (EHRAC), based at Middlesex University.

Khadija is one of the few remaining independent journalists in Azerbaijan, and has been a Chief of Baku Bureau of Radio Free Europe/Radio Liberty since 2008. Her investigative journalism has primarily focused on corruption within government and the presidential administration, for which she has won multiple awards, including from Human Rights Watch, PEN America and UNESCO. Khadija has been regularly subjected to threats, harassment, blackmail and intimidation on account of her work, which are the subject of separate legal proceedings before the European Court.

In December 2014, she was arrested on spurious charges and, in September 2015, sentenced to seven and a half years’ imprisonment. Having served 17 months in prison, on 25 May 2016, the Supreme Court ordered her conditional release for five years. The Azerbaijani authorities imposed an international travel ban on Khadija, despite the fact that the Supreme Court only required her to notify the authorities of any change to her permanent residence.

“My goal is not just achieve justice for myself in this case: I also want the repressive measures of the authoritarian regime to be exposed.”

The international community, including the Parliamentary Assembly of the Council of Europe, the Council of Europe Commissioner for Human Rights, the UN Special Rapporteur on the situation of human rights defenders, UNESCO and the European External Action Service have all expressed serious concerns about the continuing restrictions on Khadija’s professional activities and called for the travel ban and other measures to be lifted. Civil society organisations such as Amnesty International and Human Rights Watch have also spoken out repeatedly about Khadija’s persecution.

The travel ban has had a major and detrimental effect on Khadija’s professional life as an investigative journalist and her inability to discuss and present her findings internationally. In addition to breaching her free movement rights (under Article 2 of Protocol 4 of the European Convention on Human Rights – ECHR)), she argues before the European Court that the ban was politically-motivated (Article 18 ECHR), that it fundamentally interferes with her freedom of expression rights (Article 10 ECHR) and that she was unable to overturn it before the domestic courts. She also argues that she had no effective domestic remedy (Article 13 ECHR).

EHRAC is litigating a number of other cases concerning the severe harassment and persecution of other Azerbaijani human rights defenders and lawyers including Leyla and Arif Yunus, Rasul Jafarov, Intigam Aliyev, Alayif Hasanov and Khalid Bagirov since the Government crackdown of 2014.