Violence against women and girls Georgia 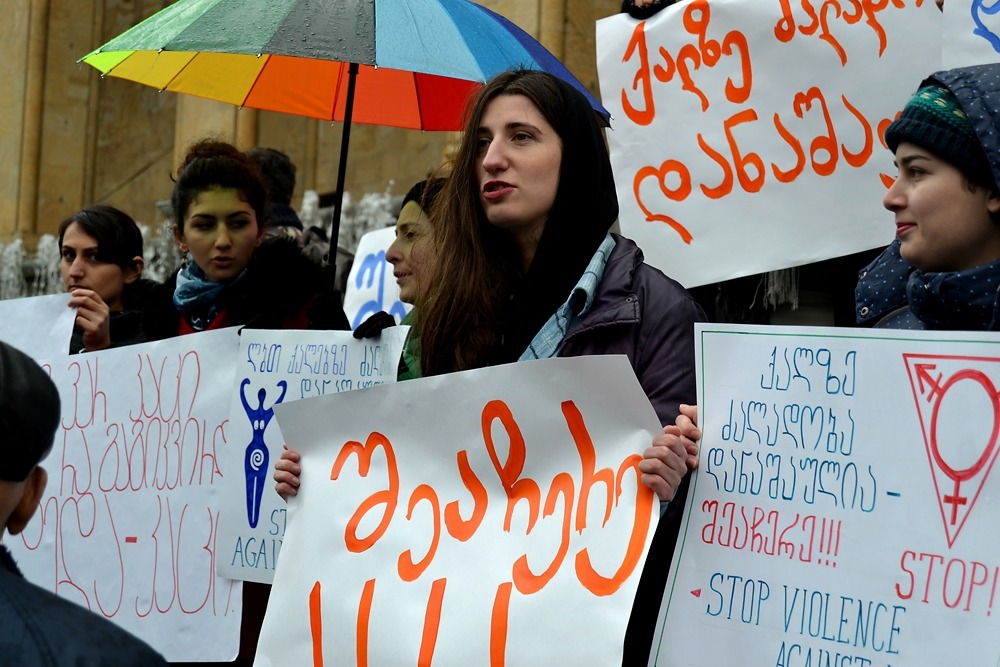 Over the last year, EHRAC and our partners at the Georgian Young Lawyers Association (GYLA), Human Rights Centre,  Union Sapari, and Georgian Democracy Initiative have litigated five cases of violence against women from Georgia before the European Court of Human Rights (ECtHR) and the UN Committee on the Elimination of Discrimination against Women (CEDAW). These cases address a broad spectrum of gender based violence, from honour-based crimes in ethnic minority communities to abuse perpetrated by law enforcement officers. All the cases have one thing in common: the law enforcement authorities were aware of the violence faced by the women victims, but took insufficient, or in some cases, no measures to protect them, resulting – in four of the five cases – in their murders or presumed suicides. In all cases, the authorities also failed to effectively investigate the violence.

Murdered after seven years of violence

B.D. married her husband in 2004. After the birth of their son in 2007, her husband began to be physically and verbally abusive towards her, controlling her behaviour and criticising her lifestyle. In 2013, B moved out to an apartment nearby, but her husband continued to visit and fight with her. In the year leading up to B’s death, four reports were made to the authorities about her husband’s abusive behaviour, including by a doctor treating her after a fight. No measures were taken to protect her, and B’s husband fatally stabbed her with a kitchen knife in March 2014.

Together with GYLA, we submitted an application to CEDAW in September 2017 on behalf of B’s mother and daughter, raising violations of the CEDAW Convention (Article 2(b)-(f) in conjunction with Article 1 and also Article 5 (a)). Relying on CEDAW’s General Recommendation 35, we also argue that entrenched patriarchal attitudes and cultural stereotypes meant that domestic violence was seen by those around B, as well as by the police responding to her reports, as a private matter. She was effectively encouraged to accept domestic violence as part of her role as a wife. The case was quickly communicated to the Georgian authorities for their observations, to which we responded in written submissions in January 2019. We took particular issue with the way in which the Government had presented the facts, disregarding recorded injuries and evident pain, warning signs of abuse (including her husband’s alcoholism and jealousy) and minimising the incidents in their written protocols, and in doing so, only perpetuating the gender based stereotypes driving the response of the police and prosecutor to B’s abuse.  The CEDAW Committee has a strong record of addressing social and cultural patterns underlying States’ gender-biased laws, customs and practices, which we anticipate will be brought to bear in B’s case.

SJ was 19 years old when her ex-husband, a police officer, shot her dead in a local park in Zestaponi, western Georgia, using his police firearm in July 2014. He had kidnapped her at gunpoint when she was 17, and continued to be routinely aggressive towards her, abusing her physically and verbally, including when she fell pregnant with their son. S made repeated reports of domestic violence to the local police, but these were never investigated. Instead, the police officers, who were friends and colleagues of her husband, humiliated her and downgraded her complaint, implying that violence was a normal part of marriage.

Together with GYLA, we submitted the case to the European Court in September 2016. The case was communicated by the Court to the Georgian Government for its observations in 2018, and we submitted our written response to the Government’s submissions in May 2019. We argued that the authorities had violated S’s right to life (Article 2 ECHR) and had discriminated against her on the basis of her gender (Article 14 ECHR). Our arguments relied on the evidence that the authorities failed to act with due diligence to protect S’s life, including by enacting and applying an adequate regulatory framework around the use by police of their firearms (S’s husband was allowed to carry a gun at all times despite multiple complaints and reports of his violent behaviour). We also argue that the authorities failed to take her complaint seriously, colluded with her husband and made humiliating and discriminatory remarks to S.

In March 2018, we lodged a similar application with the Georgian Democratic Initiative on behalf of T.T., a young woman who faced physical and psychological abuse by her boyfriend, a senior official within the Ministry of Internal Affairs. The case was swiftly communicated to the Government for its observations. We submitted our reply in March 2019, arguing that the Government’s arguments reflected and endorsed the failings and gender bias of the police, prosecutors and investigators in this case (in violation of Article 3 with Article 14 ECHR). As well as suffering repeated physical and psychological abuse by her partner, T was blamed as the victim by the State, while her partner was effectively protected by his status within the MIA and by his colleagues. The issue of gender bias in law enforcement is a global issue. In this case, the Miami University Law School’s Human Rights Clinic (with Casa de Esperanza; End Violence Against Women International, Futures without violence; Women in Federal Law Enforcement) filed a third-party intervention to the ECtHR, analysing the problem in light of international standards, and identifying good practice on holding police to account for direct and indirect complicity in gender-based violence.

In August 2018, we submitted an application to the ECtHR, together with GYLA, about the alleged suicide of a young woman, A, in Tbilisi, found dead hours after being beaten by her former husband. Prior to her death, A had endured enduring six-years of physical violence, threats and controlling behaviour by her former husband. A had reported 16 incidents of domestic violence to the police between 2013 and 2016. A’s former husband was convicted of ‘incitement to suicide’ based on the forensic and witness evidence of the beating he inflicted on her just before she died, and the history of prior violence.

In our application, we argued that the authorities breached their positive obligations to protect A’s right to life (Article 2 ECHR), by failing to act with due diligence in response to her 16 reports of violence and taking measures which may have averted her loss of life. We also raised the failure of the investigation into her death to consider whether she was murdered, or to investigate her death as a femicide. As in all of the above cases, we argued that A was discriminated against on the basis of her gender, because she was subjected to domestic violence as a result of which she ultimately died (Article 14 ECHR).

(UPDATE:) A.’s case was communicated to the Georgian Government by the ECtHR in July 2019. It is subject to the Court’s new mandatory settlement procedure. If no settlement is reached, the ECtHR will ask the parties to make written submissions on the merits. However, further consideration of the merits is currently suspended, pending completion of an appeal in the domestic criminal proceedings.

Together with Union Sapari, we represent the husband and children of K, an ethnic Azerbaijani women who lived in a rural community in Georgia. In September 2014, K was seen in the car of another man, as a result of which K was dragged out of the car by up to 15 men including her husband’s relatives, who then viciously beat her and paraded her around the village while insulting her for bringing ‘shame’ on the family. Her children witnessed the beating. She was taken back to the house of the village governor and then to her parents’ house, where her relatives encouraged her to swallow rat poison. She was found dead the next day, hanging in the shed on her parent’s property.

In our application to the CEDAW Committee, submitted in October 2018, we argued that the law enforcement authorities knew about the public beating, and the risk to K’s life as a result, especially in a community which observed an ‘honour based’ code of behaviour. The police and prosecutor had failed to take any measures to protect K before she died. Further the investigation into ‘incitement to suicide’ was not effective and has not led to any charges being brought, and the possibility that she was murdered was not considered. We also challenged the prevalence of gender-based stereotypes by the authorities and the failure to challenge or protect K from the ‘honour’ based prejudices and norms underlying her beating and ultimately her death. Our arguments were supported by an analysis of what constitutes ‘honour based’ violence, its trajectory and likely consequences, from Prof. Aisha Gill, an international expert in this area.

(UPDATE:) In November 2019, the CEDAW Committee published its decision in this case, in which it found violations of the victim’s rights and made detailed recommendations for individual remedies for the applicants and wider systemic change.