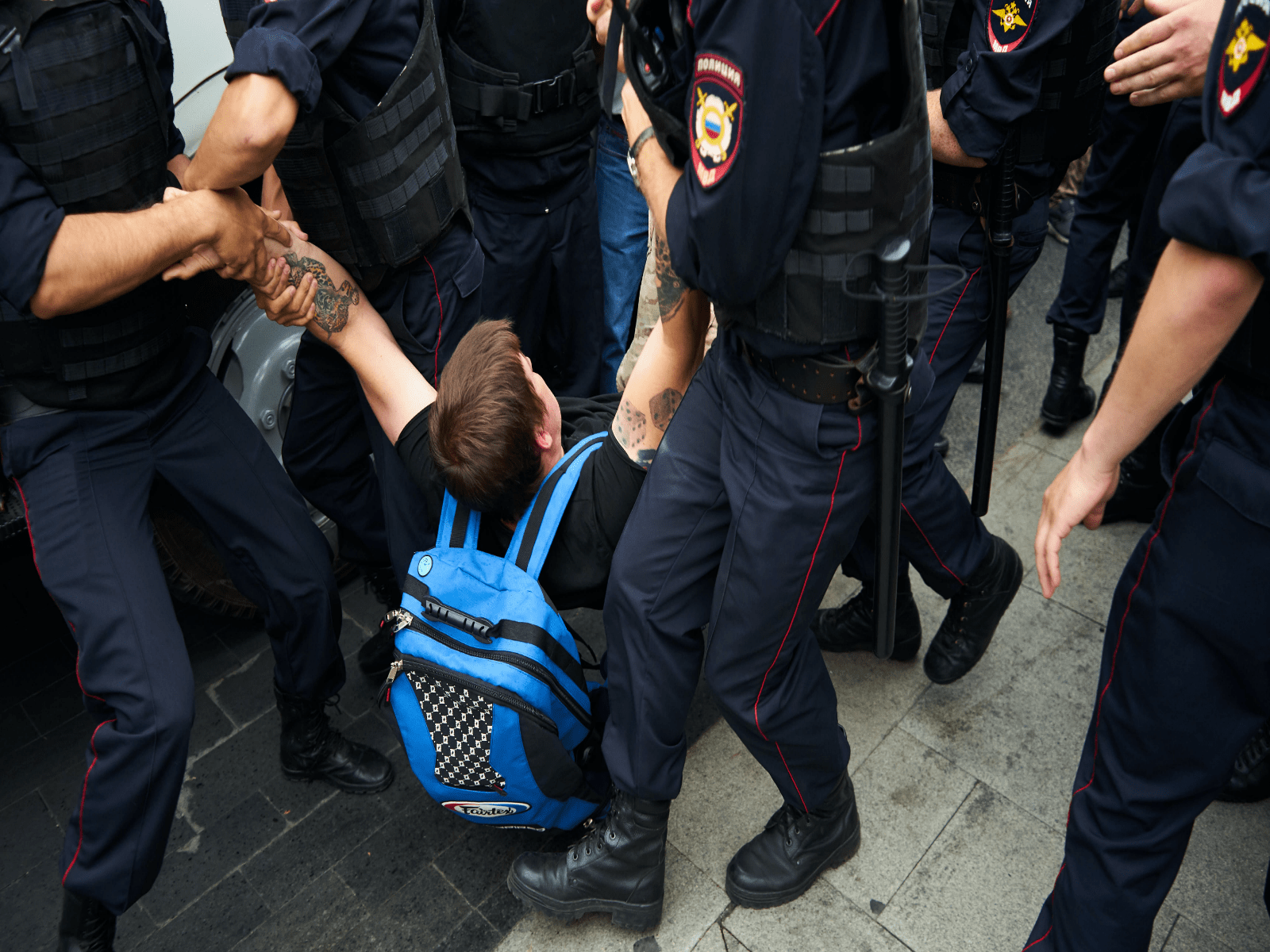 In a ground-breaking and strongly worded judgment, the European Court of Human Rights ruled that the Russian authorities had failed in their obligations to protect freedom of assembly by not taking adequate measures to ensure that the Bolotnaya Square protest of 6 May 2012 was conducted peacefully. Specifically, the Court found that, by failing to communicate with the leaders of the rally, the authorities were unable to prevent disorder and guarantee the safety of all citizens involved.

The applicant, Yevgeny Frumkin, was demonstrating peacefully when he was arrested, detained and eventually convicted for failing to obey a police order. The Court found this to be grossly disproportionate, holding that it must have had the effect of discouraging him and others from participating in protests or engaging in opposition politics more generally. In its judgment, the European Court found violations of the right to freedom of assembly and association, the right to liberty and security of the person, and the right to a fair trial. Mr Frumkin was represented by the European Human Rights Advocacy Centre, based at Middlesex University, and Memorial Human Rights Centre (Moscow).

On 6 May 2012, a large-scale peaceful demonstration took place in Moscow, ending at Bolotnaya Square, against alleged abuses and falsifications during the November 2011 parliamentary and March 2012 presidential elections. The rally had been authorised by Moscow authorities, and a route had been approved for the march, which, the Court found, included the park in Bolotnaya Square. However, as the demonstrators reached Bolotnaya Square at 5pm, they discovered that the park had been cordoned off by riot police and was inaccessible. When the riot police did not move to allow space for the participants to assemble in the park, four of the leaders of the demonstration announced a sit-down strike, with 20-50 people following their instructions. The authorities failed to adequately communicate with those taking part in the sit-down protest to resolve the mounting tension, prior to dispersing the crowd. Other demonstrators proceeded to the stage area at Bolotnaya Embankment.  At 6pm, following police instructions, one of the organisers made an announcement that the demonstration was terminated, but this went unheard by most demonstrators. At this point, the riot police began to disperse the demonstration and arrested large numbers of activists.

Mr Frumkin was one of the demonstrators protesting on Bolotnaya Embankment.  He maintained that the area around him remained peaceful. Although he heard police orders to disperse, he was unable to immediately leave the area because of the crowd and general commotion, and alleged that he was arrested with no warning at 7pm. The Russian Government stated in their observations that he was arrested at 8.30pm for obstructing the traffic and not obeying police orders to move. Mr Frumkin was taken to court on 7 May, however his case was not examined and he was taken back to a police cell at 11.55pm, having spent the day in a transit van with no food or drink. He remained in custody until his trial on 8 May, during which he was not permitted to cross-examine witnesses, nor to call additional witnesses. He was found guilty and sentenced to 15 days’ administrative detention.

Mr Frumkin lodged an application at the European Court on 9 November 2012 in which he alleged that the Russian authorities had violated his right to freedom of association and assembly under Article 11 of the European Convention on Human Rights (ECHR) on two counts. Firstly, he argued that the crowd-control measures taken by the State, including the decision to cordon off Bolotnaya Square, inevitably provoked a confrontation between protesters and the police, which had then been used as a pretext to disperse the protest. Secondly, he complained that his arrest was arbitrary, unlawful and disproportionate, as the area he was in had remained peaceful. He also argued that his subsequent detention was a violation of his right to liberty, under Article 5 ECHR. Further, the evidence submitted in the administrative proceedings against him consisted exclusively of standardised police documents, he was denied an opportunity to cross examine the police officers involved, nor was any additional defence evidence accepted, such as a video recording of his arrest. This, he argued, constituted a violation of his right to a fair trial (Article 6 ECHR).

The Court considered separately the measures taken by the state regarding the demonstration generally and those taken against the applicant personally.  Significantly, it observed that:

“although the first part of the applicant’s allegations concern a somewhat general situation, it is clear that those general events have directly affected the applicant’s individual state of affairs and his rights guaranteed by Article 11.”[1]

Finding that the Russian authorities had failed in its positive obligation to ensure that the demonstrations were conducted in a peaceful manner, the Court stated that:

“the police authorities had not provided for a reliable channel of communication with the organisers before the assembly. This omission is striking, given the general thoroughness of the security preparations for anticipated acts of defiance on the part of the assembly leaders.”[2]

Additionally, it found that the authorities made insufficient efforts to resolve the tension caused by the confusion regarding the last minute exclusion of Bolotnaya Square from the demonstrators’ route:

“The failure to take simple and obvious steps at the first signs of the conflict allowed it to escalate, leading to the disruption of the previously peaceful assembly.”[3]

Considering Mr Frumkin’s situation in particular, the Court ruled that his arrest, pre-trial detention and sentence were grossly disproportionate to the aim of maintaining public safety. Indeed the Court emphasised the alarming consequences of such repressive measures:

“the arrest, detention and ensuing administrative conviction of the applicant could not but have had the effect of discouraging him and others from participating in protest rallies or indeed from engaging actively in opposition politics.”[4]

In both respects, the Court therefore found a violation of the right to freedom of assembly.

Right to liberty and security of the person (Art. 5)

In considering the legality of Mr Frumkin’s arrest and detention the Court found that the authorities did not explain, let alone justify, his 36 hour arbitrary detention pending trial. The Court consequently found a breach of Mr Frumkin’s right to liberty due to the lack of reasons and legal grounds for remanding him in custody pending trial, in violation of Article 5(1) ECHR.

Consistent with its previous case law, the Court considered the administrative proceedings against Mr Frumkin, resulting in a sentence of 15 days detention, under the criminal limb of the right to a fair trial.  It found a violation of his right to a fair hearing on the basis that the domestic courts’ judgment relied solely on standardized police documents and did not consider additional evidence or call police officers for examination by the applicant.  As a result the domestic courts

“limited the scope of the administrative case to the applicant’s alleged disobedience, having omitted to consider the ‘lawfulness’ of the police order […] They thus punished the applicant for actions protected by the Convention without requiring the police to justify the interference.”[5]

Mr Frumkin was awarded €25,000 in respect of non-pecuniary damage.

“In this important judgment the Court rejected the narrative put forward by the State that restrictive measures were necessary to keep the peace, and robustly upheld the right to freedom of assembly at a time when this and other freedoms are under threat in Russia. It constitutes a clear statement that repressive measures that discourage political opposition are unlawful.”

This judgment highlights the particular obligations on States to facilitate protest as an integral part of the rights to both freedom of assembly and freedom of expression, and clarifies that an essential part of this obligation is the duty to maintain communication with the leaders of the demonstration throughout, in order to resolve any tensions arising. At the same time it strongly emphasises the duty not to deter political activity through disproportionate measures, such as the arrest and detention of individual demonstrators or opposition activists.