Farmanyan and others v Armenia 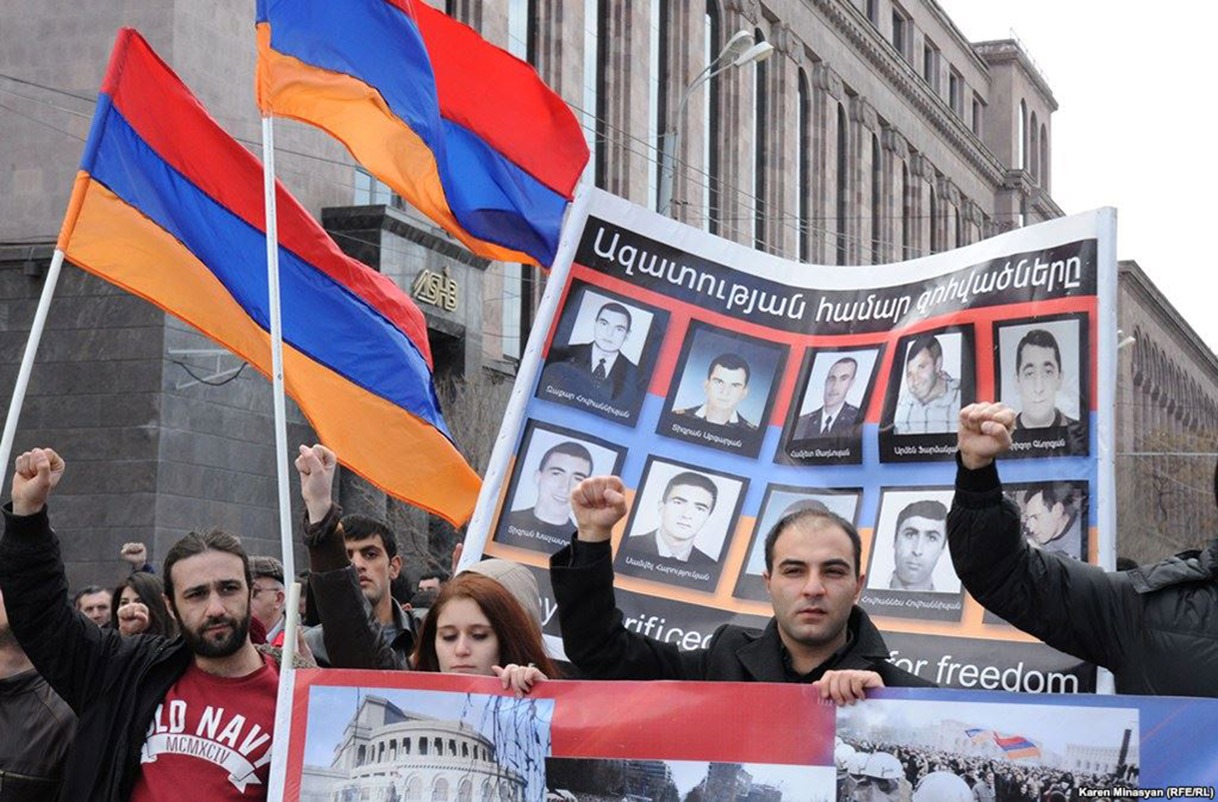 “After Armen’s death, we planted two trees for him in the garden – they are big now … and we still don’t know what really happened to Armen and why.  I would like the Court to help us to find out whose fault it was that Armen died.”

Vachagan Farmanyan’s son Armen was killed during the dispersal of the 1 March 2008 protest. The post-mortem revealed he had two pieces of shrapnel in his skull from a gas grenade.

Today marks ten years since peaceful protests in the Armenian capital against alleged fraud during the 2008 presidential election culminated in their violent dispersal. Ten people died, either during the protests or in the coming days as a result of their injuries, and Armenia was plunged into a state of emergency. The families of nine of those killed argue that their relatives died as a result of the excessive and disproportionate use of lethal force by state authorities, which the government disputes. To this day, there remain many unanswered questions about the events of 1 March and no one has been held responsible for the men’s deaths.

So what happened that day? And how has it affected the lives of the victims’ families? Sargis Kloyan, Liliya Minasyan and Ruzanna Harutunyan tell their stories.

“Our son was a young and engaged person.  That’s why he took part in the protests on Freedom Square following the 2008 Presidential elections in Armenia.  I went with him. The rallies were peaceful.  We listened to speeches.

Gor and I were not in Freedom Square when the protesters were forcibly dispersed on the morning of 1 March 2008.  Later that evening, around 8.30-9pm I was with Gor in the rally near the French Embassy. The armed police troops were positioned in the area and tried to provoke the protesters by banging their shields with their batons.  They made an explosion with a sound grenade. Protesters moved to where the sound came from.  The opposition leaders told us to gather together in the square around the Myasnikyan statue.  The armed forces of police approached us and surrounded us in a blockade.  I saw and heard tracer bullets. They were shooting for about 10 minutes. I estimate and felt that the police forces were shooting about 5 metres above our heads.”

“At around 9pm, I was on the balcony at our home and I could see and hear tracer bullets.  They looked like fireworks.  They were red in the sky and I could hear what I thought was machine gun fire. I tried to telephone Hovhannes but he didn’t pick up.  I stood on the balcony for no more than 5 minutes before I left the house with Gayane.  I knew that the main protest was by then near the Municipality building near the Myasnikyan statue, but there were many people at Shahumyan Square too, so we went there first to see if we could find Hovhannes.  For about 10 minutes, Gayane and I stood by the statue in Shahumyan Square to look for Hovhannes. We didn’t want to join the protest. We just wanted to find Hovhannes. I didn’t want to lose him.

Once we were home, and Gayane was safe, I wanted to return to the area of the children’s park to look for Hovhannes, but I heard from a neighbour that people were leaving the area as they were being beaten with truncheons, so I stayed home … I heard on the television that some people had been injured and so I started calling hospitals … the longer I couldn’t find him, the more I thought that something must have happened to him. I also started to look for Hovhannes amongst those arrested.  Hovhannes didn’t have any identification on him.

I kept calling the hospitals for two days … On 3 March 2008, I heard Hovhannes’ name on the television as being one of the deceased.

Gayane was only 17 years old when her father died. She really misses him. … Initially, she found it really hard to get work as she was known as the daughter of one of the people who was killed on 1 March. When he died, Gayane effectively took over her father’s role and responsibilities. When we cross the road, she holds my hand because Hovhannes would hold my hand.”

Ruzanna Harutunyan’s son Tigran, a police conscript, died over a month later, on his nineteenth birthday, from his injuries, which the investigation failed to link with the protests.

“I have been given different stories about what happened to the bullet that shot Tigran.  It’s all very confusing. When I first found Tigran in the hospital, I was told that he had been shot, but that they couldn’t find the bullet.  Other doctors also told me that they hadn’t been able to remove the bullet from Tigran’s body.  At the Parliamentary Commission, I was told that the bullet was fired by either a sniper or a machine gun, but they didn’t tell me which one it was.  I don’t know what to believe.”

The families of the victims took their search for justice to the European Court of Human Rights in 2011.  The case is currently pending judgment. EHRAC represent them before the European Court. We argue that the authorities used disproportionate force to disperse the protest – which had been peaceful since it started – which resulted in the deaths of their nine relatives, in breach of Article 2 of the European Convention on Human Rights (ECHR). We also argue that the authorities failed to conduct an effective investigation into their relatives’ deaths, and that they had no access to an effective remedy (Article 13 ECHR).

“The families of the deceased are relying on the European Court to establish what happened on 1 March 2008, and who is responsible for the deaths of their sons, fathers, and husbands. These cases are of crucial importance for Armenian society as a whole; unlawful use of force by the law enforcement authorities against peaceful protesters is a recurrent issue, which the government must take action to address. On a larger scale, this case is about a direct attack on peaceful protests by the ruling regime by using lethal force against protesters, who were standing in defence of their civil and political rights”.