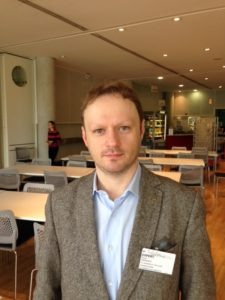 In a ground-breaking Grand Chamber judgment issued today, the European Court of Human Rights has found that Russian legislation on surveillance of mobile telephones fails to provide for “adequate and effective guarantees against arbitrariness and the risk of abuse.”  Current laws allow the Federal Security Service (FSB, successor to the Soviet-era KGB) to monitor mobile phones unchecked. The applicant in this case, the journalist Roman Zakharov, was represented by the European Human Rights Advocacy Centre, based at Middlesex University, and Memorial Human Rights Centre (Moscow).

The European Court’s judgment in this case is particularly timely, as it is likely to influence the debate in the UK over the Government’s Draft Investigatory Powers Bill, published on 4 November 2015. Some of the Bill’s provisions mirror current practices under Russian law, for example that web and phone companies would be required to store records of websites visited by every citizen for 12 months for access by law enforcement authorities, without judicial checks. Moreover, governments’ surveillance of telephone and internet communications have come under increasing scrutiny since the revelations made by Wikileaks from 2010 onwards.

The case was brought by Roman Zakharov, a journalist at the Glasnost Defence Foundation.[1] In December 2003, he began legal proceedings against mobile network operators, the Ministry of Communications and Information Technologies and the FSB, claiming that Russian law requires mobile phone operators to install equipment which enables remote interception of telephone communications by the FSB without a judicial warrant, a violation of his right to privacy.[2] His case was dismissed by the domestic courts in 2006, after which he sought justice at the European Court.

Mr Zakharov complained that, under the European Convention on Human Rights (ECHR), the domestic laws relating to the secret monitoring of mobile phones violates the right to respect for his private and family life (Article 8). He argued that parts of these laws are secret and have never been publicised, [3] and that the domestic law does not have sufficient safeguards to prevent unauthorised monitoring by the FSB. He also alleged that he had no effective domestic remedy for his complaint (Article 13).

The case was heard before the Grand Chamber of the European Court, a privilege reserved only for cases of exceptional importance, on 24 September 2014.

The Court found violations of Mr Zakharov’s right to private and family life (Art. 8), highlighting that, even though he was unable to claim that he himself had been the subject of surveillance, the very existence of the legislation  amounts in itself to an interference with his rights.

Speaking after the judgment, Mr Zakharov said, “I am satisfied with the decision of the European Court. It is evident that judges listened carefully to the arguments of both parties and the evidence presented. But the case has not been completed. It is important to change the relevant legislation and law enforcement practice in Russia. They must comply with the European Convention on Human Rights.”

The judgment noted that the interception of communications by governmental bodies is necessary in certain circumstances, including in the interests of national security, and that these are outlined under Article 8 ECHR. However, it concluded that Russian legislation does not:

“provide for adequate and effective guarantees against arbitrariness and the risk of abuse which is inherent in any system of secret surveillance, and which is particularly high in a system where the secret services and the police have direct access, by technical means, to all mobile telephone communications.”

In particular, the Court identified six areas in which the legal framework was either unclear or in violation of Article 8 ECHR:

The current legislative framework regarding secret surveillance of telephone communications in Russia leaves plenty of room for abuse by State authorities. The Court’s judgment in this case highlights that the risk that such a system could undermine democracy, while claiming to defend it, is as significant as any specific incidences of unlawful surveillance. The Russian law will now have to be radically overhauled.

[1] The Glasnost Defence Foundation monitors respect for journalists’ rights and the right to freedom of speech. In November 2015 it was added to the list of ‘foreign agents’ by the Ministry of Justice.

[3] FSB surveillance is regulated in Russia by the following laws: the Communications Act of 7 July 2003, the Operational-Search Activities Act of 12 August 1995, the Federal Security Service Act of 3 April 1995 and various orders issued by the Ministry of Communications. Order No. 70, issued by the Ministry of Communications on 20 April 1999, sets out the technical requirements which must be fulfilled by the equipment which is installed by mobile phone operators. However, the addendums to Order No. 70 (which describe the technical requirements) have never been published.