Intigam Aliyev is a courageous and dedicated human rights defender. He fought for human rights in the face of challenges and danger. He is an inspiration for all of us and we will not forget him neither other political prisoners in Azerbaijan.

Prominent Azerbaijani human rights lawyer, Intigam Aliyev, has been awarded the International Bar Association’s (IBA) Human Rights Award 2015 during the Rule of Law Symposium at their Annual Conference in Vienna. Intigam was nominated for the award by the Human Rights House Foundation, Freedom Now, and the Helsinki Foundation for Human Rights. This recognition of Intigam’s important work in the field of human rights comes six months after he was convicted on falsified charges of illegal business, misappropriation, tax evasion, abuse of office and official forgery, and imprisoned. Consequently, Intigam was unable to attend the awards ceremony, but was represented by his nineteen-year-old son, Necmin Kamilsoy. 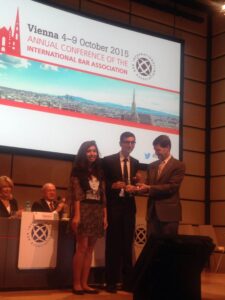 In an acceptance speech given on behalf of his father, Necmin said, “This support needs to continue as he and his colleagues remain in prison. And everyone of you as lawyers can take action by mobilizing your bar associations, law societies and legal communities to send a strong message to the Azerbaijani authorities that you will not tolerate having lawyers punished for simply doing their work.” Relaying a message from Intigam, he continued:

There are many of us who deserve this award in Azerbaijan, a country where defending human rights is a crime. I accept this award on behalf of all Azerbaijani political prisoners who are guilty for their willingness to live in a free, democratic and fair society.

In the last two years, Azerbaijan has been experiencing a severe and unprecedented crackdown on free civil society, which has resulted in the de facto closure of leading human rights NGOs, the detention and imprisonment of activists, and repercussions against lawyers who defend them. In 2013-14, the authorities arrested Anar Mammadli, Leyla and Arif Yunus and Rasul Jafarov (other NGO leaders who have been vocal in their criticisms of the human rights situation in Azerbaijan). Khadija Ismayilova, an investigative journalist, was also arrested in December 2014 on charges of incitement to suicide, with the same charges of illegal entrepreneurship, tax evasion and abuse of power added in February 2015. All have been convicted and received lengthy prison sentences. A list of Azerbaijani political prisoners, last updated in May 2015, contains the names of 80 detainees.

A well-known human rights defender in Azerbaijan, and head of the Legal Education Society, Intigam has submitted over 200 applications to the European Court of Human Rights, and violations have been found in more than 30 of his cases. These cases addressed some of the most endemic human rights issues in Azerbaijan, such as violations of the rights to freedom of expression, freedom of association, the right to free elections, the prohibition of torture, and property rights. He has participated in various events at the Council of Europe and other international and regional human rights bodies designed to raise awareness of the repression of human rights in Azerbaijan.  Intigam was arrested on 8 August 2014, and convicted of all charges by the Baku Serious Crimes Court. On 22 April 2015, he was sentenced to seven and a half years in prison and banned from holding any official position for three years after his release.

This award is a very important message of solidarity and recognition of the work of my father. With this award he knows that he is not alone and it only makes him stronger in these very difficult times.

Cases are currently pending at the European Court concerning Intigam’s situation. Two applications have already been lodged, and his lawyers are currently in the process of submitting a third, in relation to his conviction. The first application challenges the legality of his pre-trial detention, and claims that the charges brought against him are politically motivated, and thus constitute a violation of Articles 5 and 18 of the European Convention on Human Rights (ECHR). He also claims violations of his right to freedom of association (Article 11 ECHR) and his right to private and family life, home and correspondence (Article 8 ECHR). Submitted on 6 November 2014, his second application raises the degrading conditions of his pre-trial detention, the lack of adequate medical treatment, and the poor transportation conditions to his court hearings (Article 3 ECHR).

As a highly regarded human rights lawyer, Intigam’s arrest, detention and treatment during the last year has sparked international outcry. A third-party intervention in Intigam’s case was made by the Council of Europe Commissioner for Human Rights, Nils Muižnieks, (published on 16 March 2015): “the present case is an illustration of a serious and systemic human rights problem in Azerbaijan, which, in spite of numerous efforts by the Commissioner and other international stakeholders, remains unaddressed to date.” In the immediate aftermath of his sentencing in April, the U.S. Department of State “urge[d] the Government of Azerbaijan to release Aliyev and others incarcerated in connection with exercising their fundamental freedoms [and] … to afford all Azerbaijani citizens the rights guaranteed in the international agreements to which Azerbaijan has committed.”

This sentiment was reiterated in a statement by the UK Foreign and Commonwealth Office, which also expressed concern over the Azerbaijani Government’s treatment of Intigam:

As one of the first Azerbaijani lawyers to bring cases to the European Court of Human Rights and, until his arrest, coordinator of the Council of Europe’s legal training programme he made an important contribution to the legal system in Azerbaijan. Mr Aliyev joins a worryingly long list of human rights defenders sentenced to lengthy prison sentences.

EHRAC is holding a panel discussion on 27 October at the Law Society to discuss repressive measures taken against human rights defenders in the former Soviet Union, with a focus on Russia and Azerbaijan.