Intigam Aliyev sentenced to seven and a half years in prison

On 22 April 2015, Azerbaijani human rights lawyer Intigam Aliyev was sentenced by the Baku Serious Crimes Court to seven and a half years in prison and a ban on holding any official position for three years after his release. He was convicted of falsified charges of illegal business, misappropriation, tax evasion, abuse of office and official forgery. Mr. Aliyev was arrested on 8 August 2014.

A well-known activist and human rights defender (HRD) in Azerbaijan, and head of the Legal Education Society, Mr Aliyev has submitted over 200 applications to the European Court of Human Rights (ECtHR), and violations have been found in more than 30 of his cases. He has participated in various events at the Council of Europe and other international and regional human rights bodies designed to raise awareness of the repression of human rights in Azerbaijan.  Recently Azerbaijan has been experiencing a severe crackdown on free civil society; in 2013-14, the authorities also arrested Anar Mammadli, Leyla and Arif Yunus and Rasul Jafarov, other NGO leaders who have been vocal in their criticisms of the human rights situation in Azerbaijan. Mr. Jafarov, founder and chairman of the Human Rights Club, was sentenced on 16 April to six and a half years in prison under the same charges as Intigam Aliyev. Khadija Ismayilova, an investigative journalist, was also arrested in December 2014 on charges of incitement to suicide, with the same charges of illegal entrepreneurship, tax evasion and abuse of power added in February 2015. 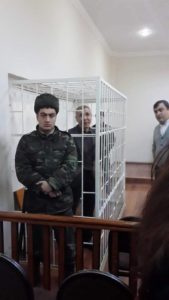 Mr Aliyev’s domestic trial has raised many concerns within the international human rights community and attracted the attention of the global press. During the first two hearings, he was handcuffed and placed in a cage, which is a blatant example of degrading treatment. Azerbaijani law did not allow him access to the case material until the end of the prosecutor’s investigation, nor were his lawyers’ requests to collect evidence for his case granted.

Applications have been lodged for all the HRDs mentioned above at the ECtHR and all have been prioritised. Mr. Aliyev’s case challenges the legality of his pre-trial detention, and claims that the charges brought against him are politically motivated (including because the authorities would want to prevent him from litigating his cases at the ECtHR and continuing his activities with the Legal Education Society), and thus constitute a violation of Articles 5 and 18 of the European Convention on Human Rights (ECHR). He also claims violations of his right to freedom of association (Article 11 ECHR) and his right to private and family life, home and correspondence (Article 8 ECHR). Third-party interventions were made by the Council of Europe Commissioner for Human Rights, Nils Muižnieks, in each of the aforementioned ECtHR cases. In his intervention in Mr. Aliyev’s case (published on 16 March 2015), the Commissioner wrote, “the present case is an illustration of a serious and systemic human rights problem in Azerbaijan, which, in spite of numerous efforts by the Commissioner and other international stakeholders, remains unaddressed to date.”

Mr. Aliyev’s application was lodged at the ECtHR on 16 October 2014, and swiftly communicated to the Azerbaijani government on 19 November. The urgency with which the ECtHR prioritised the case is testament to its significance as part of a wider crackdown on human rights in Azerbaijan. Mr. Aliyev has also lodged a second application at the ECtHR relating to alleged violations of the prohibition against torture and inhuman or degrading treatment or punishment (Article 3 ECHR). This second application raises the humiliating conditions of his pre-trial detention, the lack of adequate medical treatment, and the poor transportation conditions to his court hearings. The second application was communicated to the Azerbaijani government within one month of being sent, and the government must submit its observations by 28 May 2015.