“Death is taken out of life.” 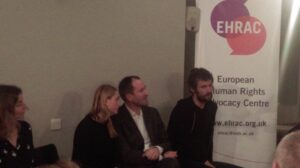 These were the words of Lithuanian director Mantas Kvedavaricius, speaking about enforced disappearances at a screening of his film, Barzakh, on International Human Rights Day. In the Chechen language, Barzakh is the land between the living and the dead, a kind of purgatory; the film shows how families cope with living a half-life, doubtful about the survival of their disappeared loved ones, but never fully reconciled to their deaths. The documentary, filmed between 2006 and 2009 in Chechnya is a moving portrayal of a handful of families, as well as a timeless account of the day-to-day suffering faced by the relatives of over 5000 men disappeared since 1999.

Following the screening Masha Karp (journalist, formerly of the BBC Russian Service), chaired a panel discussion exploring the issue of enforced disappearances in greater depth. Akhmed Gisayev, a human rights lawyer who has taken cases of enforced disappearances to the European Court of Human Rights and who is seen in the film alongside families that he represented, commented on the context in Chechnya then and now. He was adamant that the situation had only worsened since the film was made as the current regime in Chechnya poses an even greater threat to the personal security not only of men, but of their families, while law enforcement authorities continue to enjoy impunity in such cases fifteen years on. In 2004, with support from EHRAC and Memorial Human Rights Centre (based in Moscow) he had taken the case of his own ill-treatment at the hands of the Russian State agents to the European Court. He and his family left Chechnya after an attempt on his life on 13 August 2009. 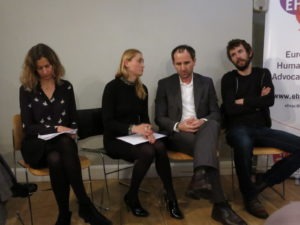 Mariat Imaeva, a PhD Candidate at Dublin City University (under the Daniel O’Hare Research Scholarship Scheme), is researching enforced disappearances in Chechnya and possible alternative remedies to the strategic litigation at the European Court. She agreed that disappearances have become more common in the North Caucasus generally, including in Dagestan and Ingushetia, although there is a dearth of accurate data. She further commented on the necessity of finding appropriate means of redress for families:

“The issue with missing people in Chechnya will never become historical until the cases are resolved and families of the disappeared are given the opportunity to have closure,  which will awaken them from their frozen lives, from spending years in anguish, waiting and constant search for their loved-ones.”

As for families of the disappeared, Jessica Gavron, EHRAC Legal Director explained that, although over 300 judgments have been handed down by the European Court with the aim of holding the Russian State to account, no action has actually been taken. EHRAC has been advocating for the implementation of these judgments by briefing the Council of Europe’s Committee of Ministers on a regular basis; however, Jessica added, that such systematic abductions and killings are only likely to be acknowledged following regime change, as we have seen in parallel situations around the world.

We were very pleased to welcome Lord Frank Judd to the event, a former rapporteur on Chechnya to the Council of Europe. He spoke of how he “felt as emotionally churned up as [he] ever did” about the issue of enforced disappearances, itself a mechanism used by the State to perpetrate violence and fear in the region. 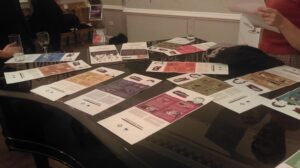 With thanks to Pushkin House for hosting the event, to Irina Norton for interpreting on behalf of Akhmed, and to People in Need for sharing images of their exhibition on enforced disappearances “Stories Without Endings”.