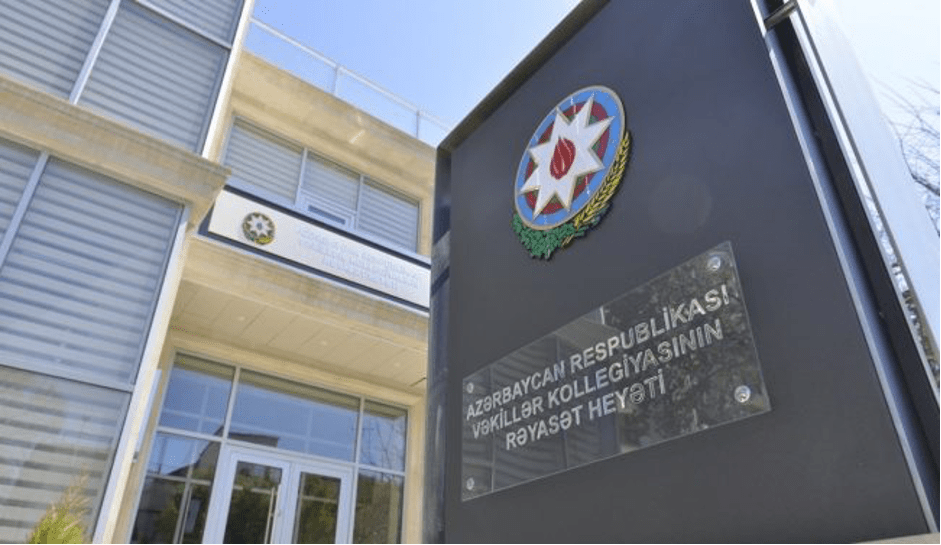 The Presidium of the Azerbaijani Bar Association (PHOTO: news24.az)

Five Azerbaijani human rights lawyers are taking a case to the European Court of Human Rights in which they allege that their Convention rights were violated by Azerbaijan when they were arbitrarily denied access to the Azerbaijani Bar in 2018.

The lawyers claim that they failed an admission process to the Azerbaijani Bar Association (ABA) that is open to bias and abuse, after the Azerbaijani Government introduced new measures restricting access to the legal profession in the country.

The five lawyers are now unable to practise before domestic courts in Azerbaijan, which has both negatively impacted their lives and impeded their vital human rights work. EHRAC is representing the applicants in this case — Emin Abbasov, Tural Hajibayli, Asima Nasirli, Samad Rahimli, and Ramil Suleymanov.

Before 2018, the five lawyers – Abbasov, Hajibayli, Nasirli, Rahimli, and Suleymanov – had worked on countless human rights cases and represented many clients before the Azerbaijani courts and at the European Court of Human Rights.

But everything changed when Azerbaijan’s parliament, in early 2018, put in place new legislative changes to the legal profession, stipulating that all lawyers representing clients before domestic courts must be members of the ABA. Before the 2018 legislation was introduced, lawyers who were not members of the ABA were able to practise in most Azerbaijani courts. These changes, in effect, prohibited non-members from practising before the courts in Azerbaijan.

The ABA is the body charged with governance of Azerbaijan’s legal profession. The independence of the ABA, and its ability to regulate the legal profession in a fair and objective manner, has long been questioned by human rights NGOs and international bodies.

All five lawyers were outspoken in their criticism of the changes, which they believed were intended to prevent lawyers from taking sensitive human rights cases against the Azerbaijani authorities. Together with a number of other lawyers, they formed a campaigning group to publicly challenge the legislation, taking part in a public press conference, submitting proposals to the Azerbaijani parliament, and preparing reports for human rights organisations and international agencies and NGOs.

Some established members of the Azerbaijani Bar responded by publicly smearing the group of dissenting lawyers. The President of the ABA accused them of wanting to create chaos in Azerbaijan.

International NGOs such as the International Commission of Jurists (ICJ) expressed concerns over the reforms, arguing that it would cause detrimental effects on access to justice, and the right to a fair trial, in a country that was already experiencing an acute shortage of lawyers, whilst also criticising the persistent lack of independence within the ABA.

Under the new rules, the five dissenting lawyers were forced to seek admission to the ABA, which required a written and oral examination. All of the lawyers passed the initial written examination component and were therefore each invited to undertake an oral interview.

It was at this stage of the admission procedure that the lawyers found their paths blocked to the Azerbaijani Bar. All five of them found themselves being failed by ABA examiners, some being asked questions that were so specific they required candidates to know 6150 provisions by heart. Other candidates were criticised for not citing legal principles in the exact order as they are found in the relevant legislation. They were failed without explanation, save that their responses were unsatisfactory.

Four of the five lawyers lodged internal appeals to the Presidium, the governing body of the ABA which includes the president and the deputy president. Their appeals were rejected.

The ICJ has noted that the Presidium of the ABA lacks independence in practise, and that the association’s president has critical influence on other members of the governing body.

In the run-up to his oral interview, Ramil Suleymanov met several times with the president of the ABA, who urged Ramil to publicly support the new legislative reforms and to forswear any membership of any political movement or party or to be involved in any political events if he were to continue practising as a human rights lawyer. Ramil acceded to the president’s demands in a signed statement.

Ramil chose not to submit an appeal with the ABA, instead taking his complaints directly to a Baku court. The other four lawyers all eventually decided to take their cases to court too, alleging that the ABA’s oral interviews were unlawful and biased.

Four of their cases were ultimately dismissed by Azerbaijan’s Supreme Court. Samad Rahimli’s appeal before the Supreme Court is still pending.

In her report of a visit to Azerbaijan in December 2019, the Council of Europe’s Commissioner for Human Rights, Dunja Mijatović, recorded that the ABA’s non-admission to the Bar of certain categories of persons “points to a deficit of institutional independence.” Concern has also been raised by the UN Special Rapporteur on the Independence of Judges and Lawyers and the ICJ.

The five Azerbaijani lawyers are now turning to the European Court of Human Rights in pursuit of justice.

In their submission to the Court, they argue that the overly broad discretion given to the body overseeing the oral interview, and their subsequent failures without adequate explanation, breaches the right to respect for their private lives, expressed through their professional lives (under Art. 8 of the European Convention on Human Rights), and that they have been deprived of the peaceful enjoyment of possessions, being their successful legal practices, (in contravention of Art. 1. Prot. 1.). The lawyers also allege that they were denied effective domestic remedies for their complaints in Azerbaijan (in breach of Art. 13).

The applicants’ lives were disrupted by the new laws. Opportunities and income were lost. Clients could not be represented. Relationships with colleagues were interrupted.

“Since the beginning of 2018, when I was deprived of the ability to represent individuals before domestic courts, I initially lost a major professional opportunity and have been shut out of domestic litigation”, said Emin Abbasov. “After that, I was forced to refer clients to other lawyers who were members of the ABA.”

In recent years, dozens of independent lawyers in Azerbaijan have been subjected to harassment, prosecution, and disbarment by the authorities in order to restrict their ability to take on high-profile and politically sensitive cases, including those concerning serious human rights violations.

EHRAC has identified over twenty Azerbaijani human rights lawyers who have been disbarred, suspended, or criminally prosecuted (or otherwise sanctioned).

Earlier this year, the European Court of Human Rights found that the suspension and eventual disbarment of Azerbaijani human rights lawyer Khalid Bagirov had interfered with his right to freedom of expression and his right to a private life, ordering the “maximum possible reparation”. Bagirov was first suspended in 2011 after he made comments about the suspicious death of his client in police custody and was later permanently disbarred in 2015 for criticising Azerbaijan’s judicial system during a high-profile trial.

“And as more judgments issued by the Court find violations of the [European] Convention due to the unlawful acts of the Bar association, its systematic shortcomings will become more and more obvious.”