“The process of legal gender recognition is not regulated by the State. This increases the risk of unemployment and poverty for transgender people, leading to their marginalisation, and rendering them vulnerable to transphobic hate crime. Stigma, unemployment and poverty present further obstacles for trans people in accessing the tools they need to seek legal gender recognition, creating a vicious circle, which is extremely difficult to overcome.”

Two Georgian trans men, Mr D and Mr K,[1] are challenging Georgia’s refusal to change the gender marker in their official documents. They submitted their applications to the European Court of Human Rights in 2017, and in March 2019, EHRAC and the Women’s Initiatives Supporting Group (WISG, Tbilisi) filed the reply to the Government’s observations in their cases.

Both Mr D’s and Mr K’s applications to change the gender marker in their official records to reflect their male gender were refused by the Georgian authorities, who argue that they must undergo gender re-assignment surgery before being allowed to do so. Such surgery is not provided by the state healthcare system or required by law, which means that they are effectively prevented from being granted legal gender recognition. Without documents reflecting their acquired gender, both men have been subjected to humiliating treatment and verbal abuse when they have shown their identity documents, for example when accessing medical care and essential services such as banking. Both men are unable to obtain a permanent job and Mr D is unable to effectively participate in the upbringing of his children. Despite recent anti-discrimination legislation, Georgia is a socially conservative country, and the situation facing both men causes them great anxiety and fear, and has isolated them within their local communities.

The Court ruled in a French case that the requirement to undergo gender re-assignment surgery for legal gender recognition is in breach of the right to respect for private and family life (Article 8 of the European Convention on Human Rights (ECHR)). Mr D and Mr K similarly argue a breach of their right to respect for their private and family life, in that they should not be required to undergo this invasive and life-threatening surgery, and that Georgia has failed to put in place a clear legal framework to allow them to amend their identity documents. They also argued that being required to undergo surgery in order to obtain legal gender recognition constitutes inhuman and degrading treatment (Article 3 ECHR), and they were discriminated against on the basis of their gender identity as a result of the Georgian authorities’ failure to change the gender marker on their official documents (Article 14 ECHR). The Court has never yet considered a violation in relation to the prohibition of degrading treatment in relation to legal gender recognition. If successful, this case would also be the first time the Court has found a violation of the prohibition of discrimination in relation to trans people.

“These cases reflect a systemic problem in Georgia. Obtaining legal gender recognition is crucial to ensuring that trans people can live in dignity, without harassment, fear and discrimination. However, Georgian law fails to clearly regulate the manner in which trans people can obtain legal gender recognition, with inconsistent and arbitrary consequences, as both Mr D and Mr K have experienced.  We hope that by litigating these cases before the European Court, the position for trans people seeking legal recognition in Georgia will be clearer and simpler in the future.” 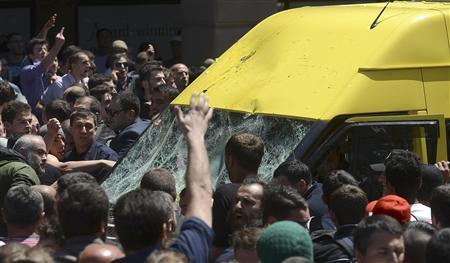 A crowd attacks a minibus carrying gay rights activists during an International Day Against Homophobia and Transphobia (IDAHO) rally in Tbilisi, May 17, 2013. REUTERS/Stringer

Reflecting the significance of and interest in the case, the Court granted permission for third-party interventions by ILGA Europe with Transgender Europe, and the Human Rights Centre of Ghent University.

These are EHRAC and WISG’s first joint cases. To support our argument, we obtained an expert report on the detrimental impact of denial of legal gender recognition on trans individuals from Prof. Stephen Whittle at Manchester Metropolitan University. EHRAC and WISG replied to the Government’s observations on 7 March 2019, and the case is now pending judgment.

Discrimination against LGBT people is a systemic problem within Georgia and across the Caucasus region. We are currently litigating high-profile LGBTI cases in Georgia, Russia and Armenia, on issues such as protest rights, failure to protect the LGBTI community and investigate crimes, and discriminatory laws and practice. EHRAC and the Georgian Young Lawyers’ Association represent WISG before the Court in a case concerning abuse against LGBT activists taking part in a flash mob organised to mark the International Day against Homophobia in 2013.

[1] Mr D’s application was submitted on 1 August, and Mr K’s on 10 November 2017. They both wish to remain anonymous in their cases before the European Court.