Almost six years have passed since the Russian parliament enacted legislation requiring any organisation receiving funding from abroad to register as ‘foreign agents’. In that time, 30 NGOs have shut down permanently, a devastating blow to Russian civil society. On 12 March 2018, EHRAC and Memorial Human Rights Centre, alongside a consortium of other NGOs, responded to the Russian Government’s observations defending the Act’s purpose before the European Court of Human Rights. We represent 18 of the 61 organisations (listed below) that have taken their case to Europe’s highest human rights body. We argue that the Foreign Agents Act interferes with the organisations’ rights to freedom of expression, assembly and association, and that the NGOs on the register are being punished for their human rights activism.

What is the Foreign Agents Act?

In July 2012, the Russian parliament adopted a series of legislative amendments concerning NGOs, which are collectively known as the ‘Foreign Agents Act’. Russian organisations receiving funding from any foreign donors, or from other Russian organisations receiving foreign funding,  and which engage in ‘political activity’ are required to register on a list of so-called ‘foreign agents’. Any NGO carrying that label is subject to stricter accounting requirements than other NGOs, and must report to the Ministry of Justice more frequently on how they spend their funds. Publications by ‘foreign agents’ must be labelled as such; failure to comply with this provision, leads to the risk of substantial fines.

What effect has it had on civil society?

According to data from the Ministry of Justice, there are currently 76 NGOs on the ‘foreign agents’ register [June 2018]. A total of 158 groups have been designated as ‘foreign agents’ to date, including 30 which have shut down rather than bear the label, and over 40 which have stopped accepting foreign funding. Other organisations have re-located outside Russia’s borders. Criminal proceedings were initiated against Valentina Cherevatenko, Chair of Women of the Don: she faces up to two years in prison for “malicious evasion of the duty to file the documents required for inclusion in the register of non-profit organizations performing the functions of a foreign agent.” She was the first and, to date, only leader of an NGO charged as an individual under the Foreign Agents Act, but the case was dropped in July 2017. 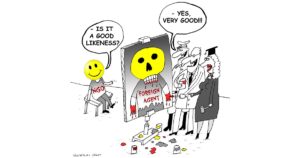 The law effectively acts as a smear campaign: the term ‘foreign agent’ is inextricably linked with spies and illicit activity as a result of the term’s usage during the Soviet era. NGOs are faced with a difficult choice: either receive foreign funding and accept the repercussions of the label; or rely exclusively on Russian sources, including presidential or governmental grants, which may result in a loss of independence and self-censorship.

What is the international perspective on the Act?

The Foreign Agents Act has been widely condemned, including by Amnesty International, the Venice Commission and the Commissioner for Human Rights of the Council of Europe. Amnesty noted that:

“the Foreign Agents Act had been used to undermine and discredit effective NGOs”, and had led to “an atmosphere of suspicion and intolerance […] the end result is that many organizations that have made a significant contribution to promotion of human rights, civil society and to the wellbeing of citizens have been forced to close down.”

In July 2017, Commissioner for Human Rights intervened in our case before the European Court, as did Amnesty International and the International Commission of Jurists, as well as five Hungarian NGOs. These interventions highlight the concern created by the Foreign Agents Act in European civil society and the strategic relevance of the case across Europe, particularly given the emergence of copycat legislation in Hungary.

How can the European Court address the Act?

All of the 61 NGOs argue before the European Court that their designation as ‘foreign agents’ contravenes their rights to freedom of expression, assembly and association (Articles 10 and 11 of the European Convention on Human Rights (ECHR)). Several of them, including 13 of the NGOs represented by EHRAC and Memorial HRC, further complain that they are subjected to restrictions and excessive reporting obligations while other NGOs are exempt from such duties, in violation of the prohibition of discrimination (Article 14 ECHR), and that their rights have been limited for politically-motivated reasons (Article 18 ECHR).

In our response to the Russian Government, we argue that the real purpose of the Act was not to increase the transparency of NGOs’ activities – the official ‘rationale’ behind the legislation – but rather to suppress public activity by organisations critical of the Government. We also outline that the repercussions faced by all NGOs included on the Foreign Agents register are exacerbated for NGOs operating in certain fields which cannot get access to funding in Russia as a result of other restrictive legislation, policy or practice, such as NGOs focusing on defending the rights of LGBTI  individuals.

A judgment from the European Court finding these violations will send a strong message to regimes around the world which have, or have planned to introduce, legislation which restricts civil society access to foreign funding, including in Hungary, Kyrgyzstan and India.

For the individual case details, please see the Appendix of the Court’s communication.

Other NGOs in this case