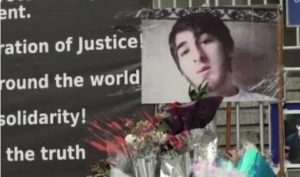 In the early hours of 26 December 2017, masked and armed State Security Service officers raided Temirlan Machalikashvili’s home in Georgia’s Pankisi Gorge region as part of a security operation. Temirlan’s family heard a gunshot from his bedroom. His mother, father, grandmother and sister were detained by officers in two bedrooms, where they were held until the morning, without being told what had happened to him. When they were finally released, they found Temirlan gone. It emerged that Temirlan had been shot in the head and hospitalised. He died on 10 January 2018 from his gunshot injuries.

“The family’s attempts to seek justice and establish the truth regarding Temirlan’s death have been met with legal and political indifference by the State. Applying to the European Court of Human Rights is the last resort for the Machalikashvili family to have their rights recognised and receive adequate remedies.”

EHRAC and the Human Rights Education and Monitoring Centre (EMC, Tbilisi) represent Temirlan’s parents, sister and grandmother, who were all at home when the raid took place, before the European Court of Human Rights. We submitted an application on their behalf on 5 June 2019, arguing that the Georgian authorities have failed to explain or effectively investigate the circumstances in which Temirlan was fatally shot.

On 25 December 2017, Temirlan had dinner with his family before going up to his bedroom. At about 3.45am, when the rest of the family were asleep, 10-15 masked, armed State Security Service officers broke into the Machalikashvili home and entered Temirlan’s bedroom. Temirlan’s family heard a loud noise, followed by shooting. Officers forced the family to the ground at gunpoint, before moving his mother, sister and grandmother into one bedroom, and his father into another. There they were held for approximately three hours. No one explained to them what had happened to Temirlan, or why their home was being searched. They were not allowed to leave the rooms even to use the bathroom. By the time they were released, Temirlan was gone. His father then accompanied officers while they searched the house, including Temirlan’s room, which was covered with blood. At 10am, the officers left the house and Temirlan’s parents went to the hospital, where they discovered Temirlan in a critical condition. Temirlan underwent surgery but died from his injuries on 10 January 2018.

A court order from 23 December 2017 showed that the purpose of the security operation was to detain Temirlan – along with four other men – and search his home, for allegedly supporting terrorists killed or detained during a special operation in Tbilisi in November 2017. Later on 26 December 2017, shortly after the operation ended, the State Security Service held a press conference during which it claimed that Temirlan was shot whilst attempting to detonate a grenade, a claim which the family strongly deny.

An investigation has been opened into Temirlan’s shooting, but his family have repeatedly been denied victim status, which limits their participation and rights in the investigation. All materials relating to the security operation, including statements from the state agents involved, have been classified as state secrets and not disclosed to the family. To date, no one has been held responsible for Temirlan’s death. His family have suffered trauma and stress both as a result of their own treatment during the raid, and the authorities’ indifference towards them during the investigation.

Why should Georgia be held responsible?

“This case reflects a serious systemic problem of lack of investigation and accountability for deaths at state hands within the region. We therefore hope that the Court swiftly communicates the case to the Government for its response.”

Temirlan’s family argue that the Georgian authorities are responsible for his shooting, in breach of his right to life (Article 2 of the European Convention on Human Rights). Firstly, he was fatally wounded by State Security officers. The Georgian authorities are therefore required to provide a satisfactory and convincing explanation of the circumstances in which Temirlan was shot and to provide solid evidence that the lethal force used was absolutely necessary, which they have failed to do. Despite having sufficient time to plan the operation, the authorities failed to minimise the risk of loss of life, and Georgian law does not adequately regulate the use of force by security forces. Secondly, the investigation into Temirlan’s death was deficient for multiple reasons, including its lack of independence and limited scope, the way in which evidence has been gathered and handled, and the repeated denial of victim status to the family. Thirdly, the family argue that they have experienced unnecessary psychological suffering amounting to inhuman and degrading treatment (Article 3), which has not been effectively investigated. Finally, the family have been denied an effective remedy for their claims (Article 13).

Temirlan Machalikashvili’s shooting took place against a backdrop of increased security operations in the Pankisi Gorge region, home to ethnic Kist people. The case is very high-profile in Georgia, and has been the subject of much political and national debate. The US State Department, Amnesty International and the Public Defender of Georgia have all urged the Georgian Government to conduct a prompt, impartial and independent investigation into his killing.