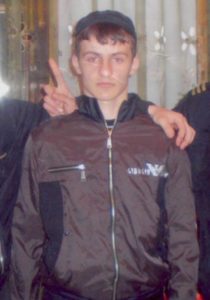 On 21 October 2009, 19 year old Sayd-Salekh (pictured right) was detained by the police in Grozny following an alleged armed skirmish at his family house in Goyty, Chechnya. According to his uncle, who had been brought to the police station at the same time, Sayd-Salekh was beaten at the station, appeared frightened and had difficulty standing up. His uncle was told by police officers that during the alleged skirmish, two police officers had been wounded and one killed, and he was therefore made to understand that that the “blood feud” for the death of the policeman would fall on him and his family. His uncle was released soon afterwards, and was the last person to see Sayd-Salekh at the police station. The family has had no news of Sayd-Salekh since.

The applicant claimed that her son was killed by State agents in violation of the right to life (Article 2 of the ECHR), that the State failed in its positive obligation to protect his life, that the investigation was inadequate, and that the mental suffering caused to her constituted inhuman or degrading treatment, and violated her son’s right to liberty. She also claimed that the domestic remedies available to her were ineffective.

In response to the applicant’s complaints, the Government claimed that no information about his death had so far been obtained, and disputed that it had failed to investigate the presumed death. It also contested her other claims.

However, the Court concluded that given the length of time following Sayd-Salekh’s disappearance, and taking into account similar incidents from the North Caucasus region, he must be presumed dead, and that his death is therefore attributable to the State, finding a violation of the right to life (Article 2). A further violation of Article 2 was found because of the authorities’ “failure to act rapidly and decisively” to protect his life. In terms of the investigation, the Court was “struck by the apparent reluctance of the investigating authorities to establish the circumstances and legal grounds of [his] delivery to the regiment where he was last seen alive” and therefore violated the procedural aspect of Article 2.

The Court concluded that Raisa Turluyeva must also be considered a victim, and that the distress and anguish suffered by her and the way her complaints were dealt with violated Article 3 of the ECHR. Given that her son was detained by State agents, without legal grounds, the Court also found a “particularly grave” violation of the right to liberty and security (Article 5). It also found that the ineffectiveness of the criminal investigation undermined any theoretical civil remedies and violated her right to an effective remedy (Article 13).

“I believe that you did everything possible to help me when I was left to face my son’s abduction alone. I regret not coming to you sooner.”

Raisa Turluyeva, on hearing the judgment

“With three separate findings of a violation of the right to life, this shocking case is another serious indictment of the security forces in Chechnya, which have been found to have carried out enforced disappearances since 1999. The European Court has already diagnosed a ‘systemic dysfunction’ in the investigation of such cases. The international community must now take further action to ensure full investigations are carried out.”