On 14 June 2016, the European Court of Human Rights found that former Georgian Prime Minister Ivane Merabishvili’s pre-trial detention was used to exert pressure on him and “lacked reasonableness”. Mr Merabishvili is represented by the European Human Rights Advocacy Centre, based at Middlesex University (London), and Otar Kakhidze, a lawyer based in Tbilisi. 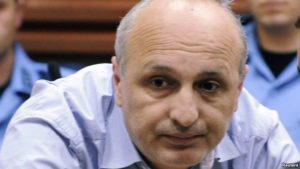 Mr. Merabishvili was the Georgian Prime Minister under President Mikheil Saakashvili for three months in 2012, and was formerly Minister of Interior.  He later became the Secretary-General of the United National Movement (UNM) party. In the wake of the Georgian Dream coalition’s victory in the October 2012 parliamentary elections, Georgia experienced a spate of arrests of senior UNM figures, including Giorgi Ugulava (former Mayor of Tbilisi).  Mr. Merabishvili was arrested on 21 May 2013, on charges of misspending GEL 5.2 million (a little more than €2 million) of public money. He remained in pre-trial detention for just under nine months; on 17 February 2014, he was convicted of vote-buying, misappropriation of another person’s property and breach of inviolability of another person’s home, and sentenced to five years’ imprisonment. He is currently detained in a Tbilisi prison.

In his case before the European Court, Mr. Merabishvili argued under Article 5 of the European Convention on Human Rights (ECHR) that the decisions ordering his pre-trial detention were based on unclear legal rules and lacked reasonable grounds. He also submitted that the domestic court failed to carry out a proper review of his request for release in its decision on 23 September 2013, and failed to provide reasons for rejecting his request. Finally, he claimed that the proceedings brought against him were aimed at excluding him from political life, weakening the UNM and preventing him from standing as a candidate in the October 2013 presidential elections (Article 18 with Article 5(1)).

In finding a violation of Article 18 the Court referred to an incident on 14 December 2013, when Mr. Merabishvili was taken from his cell late at night as part of investigations concerning other senior UNM members.  Noting that the burden of proof in cases where Article 18 is alleged is an “exacting” one, the Court found that the applicant had presented a credible and convincing account of the incident, which he had promptly reported to the domestic authorities.  It therefore held that his pre-trial detention was used not only to bring him before a court but was “also treated…as an additional opportunity to obtain leverage over the unrelated investigation into the death of the former Prime Minister and to conduct an enquiry into the financial activities of [Mr Saakashvili], two aims wholly extraneous to [Article 18 ECHR].”

“Violations of Article 18 of the European Convention are very few and far between – it is extremely rare in practice for the European Court to find that prosecutions have been brought for political or other ulterior purposes. This is the first such finding against Georgia – it is clearly a very serious matter given that it involves a former Prime Minister whose pre-trial detention was found to be based not only on legitimate grounds, but also on two ‘wholly extraneous’ reasons. The Court’s findings indicate that in order to meet the standards required of a fully functioning democratic state, further systemic reforms of the judicial system are urgently needed.”

This judgment reiterates that the authorities must provide ongoing justification for continued detention; it was not sufficient that Ivane Merabishvili’s arrest and pre-trial detention were initially lawful and based on reasonable grounds. We also welcome the Court’s finding of an Article 18 violation, its second in one of our cases this year. An allegation that a politician’s activities have been restricted in order to prevent his participation in politics is a serious one given, as the Court said, “the existence of a direct link between human rights protection and the functioning of democracy”.  We are encouraged by the development of this area of the Court’s case law.

On 22 June 2016, the members of the Parliamentary Assembly of the Council of Europe issued a declaration on the situation in Georgia in the run up to parliamentary elections this year, which stated:

“Already several times, facts of organised violence against opposition members of parliament and politicians by individuals linked with the Georgian Government have been reported. It is the responsibility of the Government to punish offenders and repeated failure to do so raises serious questions about the level playing field in Georgia.

[…]Mr Merabishvili is only the third political figure in relation to whom this breach was established by the Court.

It should be said that the practice of the Committee of Ministers in cases when a breach of this article was established has been to recommend the release of the person concerned and the dropping of all charges. We call upon the President of Georgia to use his constitutional powers and respect this decision. The Secretary General of the main opposition party imprisoned in the run up to the elections and found to be deprived of Article 18 rights by the European Court already casts a shadow on these elections.”