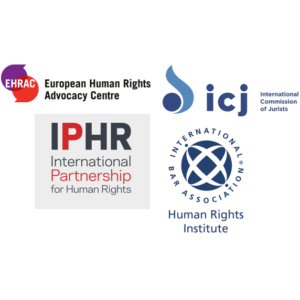 EHRAC, the International Bar Association’s Human Rights Institute (IBAHRI), the International Commission of Jurists (ICJ) and the International Partnership for Human Rights (IPHR) filed a joint-submission on 23 October 2019 informing the UN Special Rapporteur on the Independence of Judges and Lawyers of the continuing attacks on the independent work of lawyers in Azerbaijan. EHRAC, together with the NGOs, urged Mr. Diego García-Sayán to scrutinise the situation in the country, including by requesting a visit to Azerbaijan, to urgently address the issues with the Azerbaijani authorities.

Annexed to the submission was a list of all of the cases of human rights lawyers who have been disbarred, suspended or criminally prosecuted in Azerbaijan, compiled by EHRAC.

The persecution of independent lawyers and their subjection to harassment, criminal prosecution and disbarment by the Azerbaijan authorities has intensified in recent years. Such sanctions are intended to restrict their ability to take on high profile and politically ‘sensitive’ cases, especially those concerning human rights violations.

“We are extremely concerned about the ongoing persecution of human rights lawyers in Azerbaijan, which not only effectively prevents them from practising their profession but also often deprives their clients – particularly victims of human rights violations in detention – of access to a lawyer. Many of our partner lawyers in Azerbaijan have been adversely affected by such repressive policies. Their ability to continue taking on human rights cases has been severely impacted, which is, in effect, what the authorities seek to achieve – to prevent lawyers from exposing their misdeeds. As the international community, we need to mobilise our efforts in addressing this issue with the authorities, and this is what we aim to do with this submission.”

In 2017 the Azerbaijani parliament approved a package of amendments to legislation governing the legal profession, essentially prohibiting those who are not members of the Azerbaijani Bar Association (ABA) from representing clients domestically. The highly-politicised body is now increasingly wielded as a tool of repression by the Azerbaijani authorities. This ‘Bar Association monopoly’ – as EHRAC’s joint-submission describes – cripples the ability of independent human rights lawyers to take on new cases and resume their practice in domestic courts. It also deprives many victims of human rights violations of effective legal representation.

The ABA is also responsible for conducting regular examinations for lawyers to qualify as members. Renewed rounds of admission examinations to the ABA have taken place in recent years, leading to concerns being raised over the sufficiency and effectiveness of safeguards to ensure fairness and non-discrimination in entering the legal profession, particularly surrounding the oral part of the ABA’s examination process.

EHRAC’s joint-submission also highlights the ABA’s failure to protect its members against pressure from the Azerbaijani executive. The ABA initiates disciplinary proceedings against lawyers for their free expression and the legitimate defence of their clients – such as speaking to the media about the abuse of their clients’ rights in detention, including torture allegations – based on complaints submitted by the law enforcement bodies or individuals at the behest of such bodies. Such disciplinary case are initiated as a result of the abusive application of certain provisions of the Code of Conduct regulating issues of professional ethics of lawyers.

“The disciplinary procedure is a particularly weak point for the legal profession. Many recent disciplinary cases against advocates raise serious concerns of lack of independence or due process, and the disciplinary process appears to be abused as a means of harassment of lawyers, in particular of human rights lawyers and lawyers who undertake sensitive political cases. The cases raise doubts in regard to what the real-life Code of Ethics is being imposed on independent advocates: whether the Code is enforced to ensure a zealous, honest and principled position in regard to their clients’ cause and remedying violations of human rights of their clients, including through making those violations known to the public; or rather whether the de facto utility of the Code is to serve as an instrument against those advocates who meet internationally recognized standards of lawyers’ ethics.”

EHRAC’s joint-submission noted the most recent disbarment case of human rights lawyer Yalchin Imanov, who was indefinitely disbarred after urging the Azerbaijani authorities to investigate serious allegations of torture suffered by his client in Gobustan high security prison and describing to the media the abhorrent treatment his client was subjected to. EHRAC has extended support to Imanov in taking his case to the European Court of Human Rights (ECtHR).

EHRAC is currently acting for a number of other Azerbaijani lawyers in European Court cases, challenging their disbarment and harassment by the authorities. Prominent human rights lawyer Khalid Bagirov was disbarred following alleged comments that he made that were critical of the Azerbaijani state and judiciary during a trial of the prominent opposition figure Ilgar Mammadov in September 2014.

Alayif Hasanov was disbarred in July 2016 as a result of a previous—and spurious—conviction for libel. He had drawn attention online to the physical and psychological harassment of the renowned human rights defender Leyla Yunus by her cellmate in a pre-trial detention centre.

Intigam Aliyev is a prominent human rights lawyer who has been persecuted by the Azerbaijani authorities for his human rights work. He was arrested on falsified charges in 2014. In September 2018 the ECtHR ruled that the arrest and detention of Aliyev was intended to “silence and punish” him for his human rights work. Aliyev is still negatively impacted by the charges brought against him. EHRAC has been closely following the supervision process of Aliyev’s case in Strasbourg, and filed submissions to the Committee of Ministers in his case in May 2019 and September 2019. The submissions pointed out that certain measures undertaken by the Azerbaijani Government were insufficient in fulfilling the implementation of the ECtHR judgments, and set out recommendations as to what measures were necessary to fully remedy the violations.

The Azerbaijan authorities recently returned to Intigam Aliyev his offices, as well as documents seized upon his arrest in 2014. Yet his travel ban remains in place, and his bank accounts—and those of his NGO—are still frozen. The Committee of Ministers at the Council of Europe urged Azerbaijan in September 2019 to quash Aliyev’s conviction decision and delete his criminal record, in addition to seven other applicants – all human rights defenders – collectively as the ‘Ilgar Mammadov group’. Aliyev currently has a case pending before the ECtHR that relates to the criminal proceedings that led to his conviction.

EHRAC also acts for Asabali Mustafayev, an Azerbaijani lawyer who is well-known for taking on cases relating to politically-motivated prosecutions. Mustafayev’s license was suspended by the ABA in April 2018 after the Azerbaijani prosecutor’s office lodged complaints about his public statements concerning the politically motivated case on which he was working. A travel ban imposed on him was lifted in July 2019, but restrictions imposed on Mustafayev’s bank accounts remain in force.