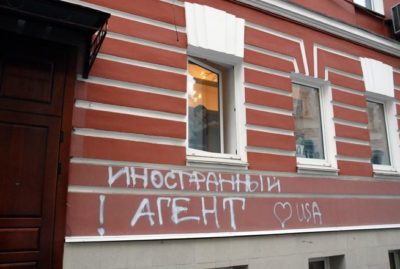 The words ‘Foreign Agent’ graffitied on the wall of Memorial Human Rights Centre’s offices in Moscow.

We deplore the action being taken by the Prosecutor’s Office in Moscow seeking the liquidation of International Memorial and Memorial Human Rights Center for allegedly breaching the ‘foreign agents’ act. We view this as being politically motivated and in breach of Russia’s obligations under the European Convention on Human Rights.

Since the 1980s Memorial has been the leading civil society voice in Russia, documenting the political repression of the Soviet Union and highlighting human rights abuses being committed in present day Russia. For the past twenty years Memorial Human Rights Center has been fighting for the rights of Russian citizens both in national and international courts. Since the early 2000s, EHRAC has been working very closely with the lawyers at Memorial Human Rights Center to bring a series of landmark cases to the European Court of Human Rights, notably concerning gross violations committed by the security forces in Chechnya, and on behalf of the victims of the Beslan school siege and the relatives of Memorial colleague Natalia Estemirova who was abducted and murdered in 2009.

Less than a year after the ‘foreign agents’ act was adopted in 2012, Memorial Human Rights Center and EHRAC launched proceedings at the European Court on behalf of 18 Russian NGOs which were targeted by the act, which is the legislation now being used to liquidate Memorial itself. The cases were referred to the Russian Government in 2017, but the Court’s judgment is still awaited.

This is a critical moment for civil society and the human rights community in Russia. We call on the international community to take urgent steps to engage with the Russian authorities in order to halt the proceedings seeking to liquidate Memorial.