EHRAC and Memorial defend the right to protest in Russia

In March 2017, the European Human Rights Advocacy Centre (EHRAC), based at Middlesex University, litigated a series of cases in partnership with Memorial Human Rights Centre (Moscow), addressing the Russian Government’s tightening restrictions on holding peaceful protests, and the repercussions faced by those who do hold peaceful protests against governmental decisions.[1] The European Court of Human Rights has previously noted the “chilling effect” of disproportionately severe sanctions – including arrest, detention and charges –on open political debate in Russia.

Restrictions on the right to freedom of peaceful assembly have become a systemic issue in Russia, particularly since the Bolotnaya Square demonstration against alleged abuses and falsifications during the November 2011 parliamentary and March 2012 presidential elections. Our joint cases aim to expand the Court’s protection of the right to peaceful protest, including protests concerning polemic issues, such as LGBTI rights, the right to access a public hearing, and Russia’s military intervention in Ukraine, as our cases below demonstrate. 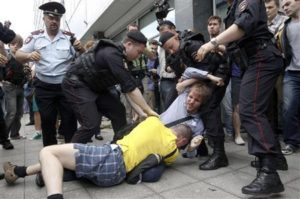 Policemen break up a fight between a gay rights activist and an anti-gay rights activist (in yellow) during a protest against a proposed new law termed by the State Duma, the lower house of Parliament, as “against advocating the rejection of traditional family values” in central Moscow June 11, 2013. REUTERS/Maxim Shemetov

LGBTI activists and supporters organised a kissing protest outside the Duma (Russian parliament) in Moscow on the day a bill proposing the prohibition of ‘propaganda of non-traditional sexual relations’ was having its second and third reading. The protesters (including five applicants in this case) were far outnumbered by conservative Orthodox Christian activists who supported the bill. They threw rotten eggs and nettles at the protesters. Shortly after this police officers surrounded the LGBTI activists and pushed them into police buses. Around 60% of the protesters against the bill were arrested, detained and charged, compared with only 2% of the Orthodox activists.

The applicants complain of an infringement of their right to freedom of assembly (Article 11 of the European Convention on Human Rights (ECHR)), and the prohibition of discrimination on grounds of sexual orientation and political opinion with regards to their arrest (Article 14). They also argue that their arrests were unlawful (Article 5) and that the proceedings against them were unfair (Article 6). 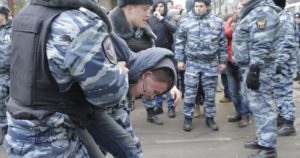 Police detain a protester outside the Zamoskvoretsky courthouse in Moscow on February 21, 2014. ©2014 Reuters

We are litigating two cases with Memorial HRC concerning the denial of access to a public hearing on the Bolotnaya Square demonstration of 24 February 2014. In Andreyeva and others v Russia, the ten applicants were denied entry to the court house, and they had no option but to assemble outside the court building. The ten applicants in Mayzuls and others v Russia joined the same assembly. Along with other members of the public, the assembly started chanting “Freedom for the 6 May prisoners”, “Freedom for political prisoners” and “Russia without Putin”. The police authorities deemed this to be an unauthorised protest and ordered them to disperse. All the applicants were arrested, and convicted of administrative offences. A similar case pursued by EHRAC and Memorial, involving a protest on 21 February 2014, is now being considered by the Court following its communication to Russia in June 2016.

On 1 March 2014, the Upper House of the Duma approved a presidential request to use armed forces in Ukraine. The next day, around 300 protesters (including the 14 applicants) gathered on Manezhnaya Square, silently holding homemade posters saying “No to war” and “No to intervention in Crimea”, as well as white paper doves. Protesters later started chanting “No to war” at which point the police began to make arrests: around 100 people were apprehended in total, according to the Russian Ombudsman’s representative. The applicant represented by EHRAC, Memorial and Public Verdict in this case, Ms Kotova, submits that her rights under Articles 5, 6 and 11 ECHR have been infringed.

As well as protecting the right to political protests and demonstrations against laws and policies, particularly those aimed at suppressing fundamental rights of vulnerable groups, these cases will build upon the substantial legal points established in the Court’s comprehensive assessment of the right to freedom of assembly and association in the case of Lashmankin and others v Russia.

[1] EHRAC and Memorial HRC responded to the Government’s observations in each of these cases.