This year, EHRAC’s Legal Skills Development Programme (LSDP) was held in Strasbourg, home of the Council of Europe (CoE) and the European Court of Human Rights (ECtHR). We invited nine lawyers from Russia, Georgia, Armenia and Ukraine, including representatives of NGOs with which EHRAC is currently undertaking strategic litigation at the ECtHR. Many of this year’s participants were senior lawyers with substantial experience before the ECtHR, while two were in Strasbourg for the first time.

The programme was arranged and facilitated by EHRAC’s Jessica Gavron (Senior Lawyer), Kate Levine (Legal Officer), Laure Trebosc (Programme Manager) and Mariat Imaeva (Case and Project Support Officer). We were also pleased to welcome Anna Tomarovskaya from the Delegation of the European Union to Russia who joined the group as an observer. 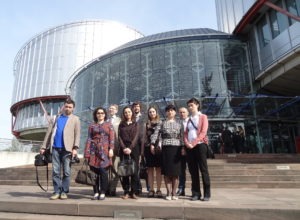 The programme focused on the implementation of ECtHR judgments, which presents considerable challenges in the countries concerned, as well as procedural aspects of lodging a case. Participants met with senior officials from across the various bodies of the CoE, including the Parliamentary Assembly (PACE), the Committee of Ministers, ECtHR Judges and Registry Lawyers.

These sessions were designed to allow for open and informal discussion, permitting participants to gain a unique insight into the working and priorities of the ECtHR and the CoE institutions. Our partners were encouraged to ask challenging questions relating to their own caseload and to relay their concerns about the human rights situation in their country. Many officials commented that such direct contact with lawyers on the ground in these countries was extremely valuable, and welcomed future communications.

Participants met with two Judges from the Court. The Ukrainian Judge, Ganna Yudkivska, gave participants helpful advice about Rule 39 applications for Interim Measures, currently being used by Azerbaijani lawyers on behalf of imprisoned colleagues and Ukrainian lawyers on behalf of individuals detained in Eastern Ukraine. Judge Yudkivska also discussed the Court’s approach to the cases arising out of the occupation of Crimea and conflict in Eastern Ukraine. Judge Nona Tsotsoria of Georgia gave valuable insight in to the Court’s attitude to Friendly Settlements and Unilateral Declarations, an approach that the Georgian Government has recently adopted. As one participant said:

Meetings with Judges are very important because they can tell us things which are not found in books.

Frank Power, the Deputy Permanent Representative of Ireland to the Council of Europe, kindly hosted a two-hour meeting with the Committee of Ministers, attended by representatives from Estonia, Finland, France, Germany, Latvia, the Netherlands, Norway, Poland, Sweden and the UK. EHRAC asked participants to draft Rule 9.2 submissions (third-party communications by NGOs or other civil society organisations) on priority cases from their countries in preparation for this meeting; hence, participants were in a position to brief the Committee on implementation issues in cases such as Ilgar Mammadov v Azerbaijan (imprisonment of an opposition politician) and the Zhovner Group of cases against Ukraine (non-execution of domestic judgments). Discussion with the Representatives provided participants with insight into the complexities of executing judgements and how civil society can most usefully contribute to that process. After the meeting, Frank Power commented:

It was interesting for us to hear the details of the cases and experiences of the lawyers. And what I hope was useful for the participants was to hear how the implementation of judgments actually works. 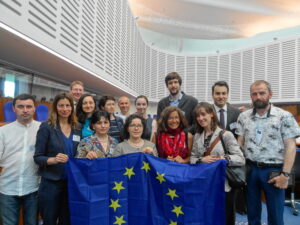 The participants also attended a Grand Chamber hearing in the case of A.B. v Switzerland, which concerned the conviction of a journalist for disclosing confidential information from a judicial investigation. The hearing allowed participants to observe different advocacy styles, and provoked discussion about the presentation of the case. Sergey Zayets, an experienced lawyer from the Regional Centre for Human Rights, originally based in Sebastopol, and recently relocated to Kyiv, commented:

However experienced you are, the first time you attend a hearing at the European Court, you are in awe at being there, impressed by the silence as the judges enter, and the general solemnity of the proceedings. The second time, you are able to concentrate more and listen to the content of the case. This was my third visit and only now was I able to analyse the pleading as a professional and put myself in the shoes of the lawyers. I now feel more prepared, were I to plead my own case in Strasbourg. I would not feel intimidated during the hearing, would be able to use the right tone and speak with confidence to the judges.

A panel discussion with Russian, Ukrainian and Azerbaijani Registry Lawyers led to a productive session, reviewing some of the procedural hurdles involved in lodging complex cases at the ECtHR. For example, the group discussed the practical and jurisdictional difficulties involved in lodging cases from Crimea and Eastern Ukraine, as well as the cases arising from the conflict in South Ossetia in 2008.

The group also met with representatives of the Human Rights Commissioner’s Office and gained useful information about the Commissioner’s role and how best to interact with his Office. For example, during the meeting our partner lawyer from Armenia received detailed and practical information on how to provide input prior to an upcoming country visit by the Commissioner and was able to make direct personal contact with the person in charge of the visit.

During the LSDP, Mariat Imaeva noted that the participants were “a very engaged and committed group of lawyers”. Jessica Gavron commented:

This LSDP provides a rare opportunity for lawyers on the ground working in difficult conditions in countries with serious human rights abuses to meet with senior CoE officials working on all stages of their cases, facilitating discussion of issues encountered and providing insight into the CoE processes. On this particular trip, participant lawyers took full advantage of this to raise pressing issues of world concern, such as the systematic imprisonment of human rights defenders in Azerbaijan and the legal implications of the conflict in Ukraine. We hope that this exchange of perspectives is valuable for all concerned.

The feedback for the LSDP was very positive, with participants stating that:

“I got answers to the questions that I can directly implement in my current work… I faced some obstacles in my work and EHRAC gave me an opportunity to ask judges and lawyers directly.”

“EHRAC does a great job for the NGOs in the region. Additional to their everyday assistance they gave us a chance to meet people that actually make decisions on the work that we do.”

“I gained valuable legal experience [which will] improve my work on current cases in the court.”

“I was able to meet new people and was given a space and possibility to express myself. That is the most important thing for my country right now.”