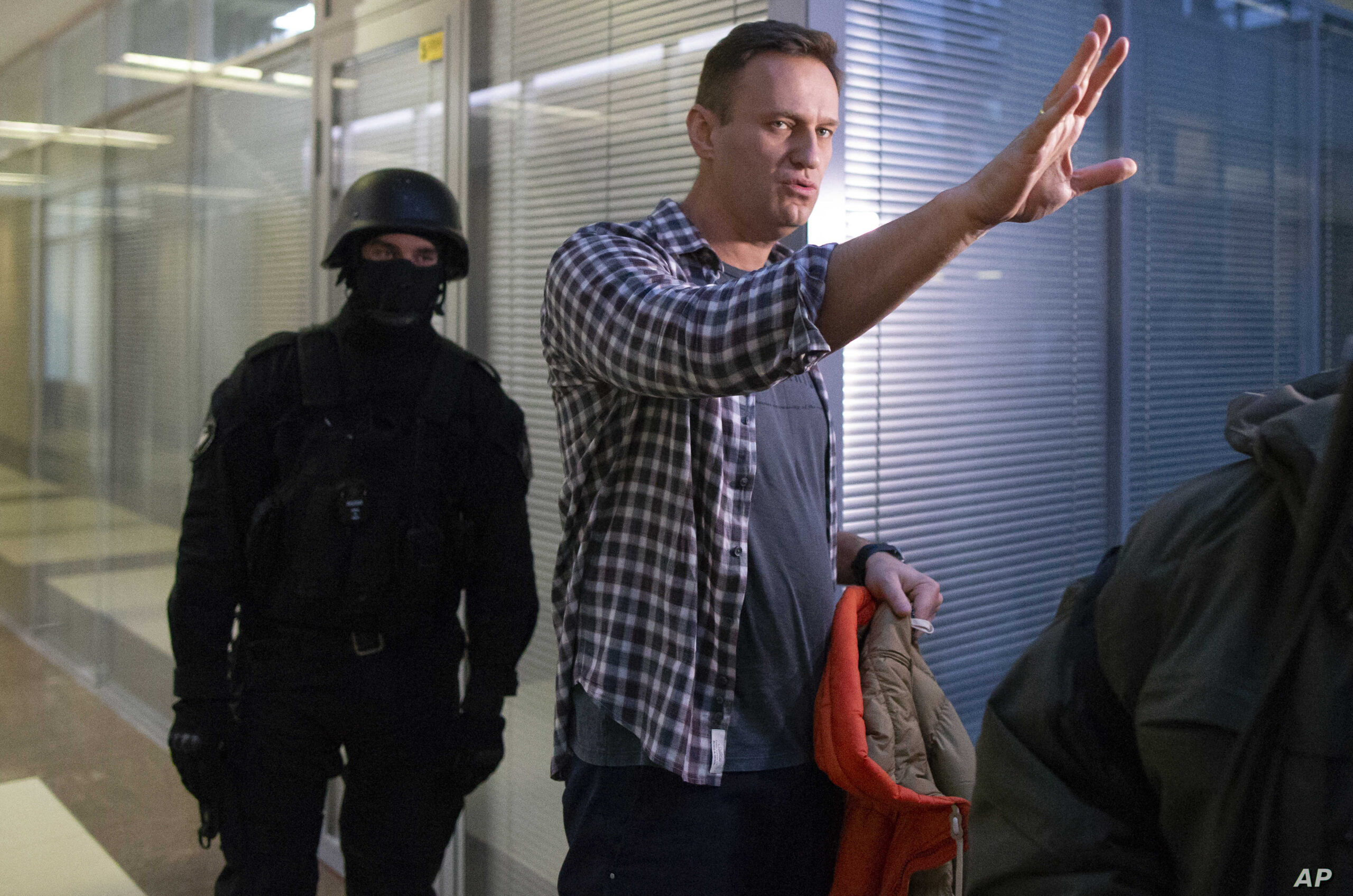 Russian opposition leader Alexei Navalny speaks to the media as a policeman stands guard at the Foundation for Fighting Corruption office in Moscow, Russia, Thursday, Dec. 26, 2019. Alexei Navalny, the most prominent foe of President Vladimir Putin and the governing United Russia party was detained in his office in Moscow. (AP Photo/Alexander Zemlianichenko)

EHRAC has intervened in a high-profile case at the European Court of Human Rights (ECtHR), brought by the prominent Russian opposition activist Alexei Navalnyy, arguing that political interference in criminal trials should be designated by the Court through the application of the rarely-invoked Article 18 provision of the European Convention on Human Rights (ECHR) in conjunction with the right to a fair trial. Navalnyy is challenging the Russian Government over the legality of the criminal trial that resulted in his re-conviction for embezzlement in 2017, along with his former business partner Petr Ofitserov (who died in 2018). The criminal case against the pair was re-opened in Russia as a result of a 2016 ECtHR judgment having previously determined that their initial conviction had violated their right to fair trial.

EHRAC’s third-party intervention, lodged on 14 January 2020, centres on the interpretation of Article 18, a provision which is intended as a fail-safe provision to prevent the encroachment of authoritarianism in democratic societies. The right to a fair trial provides protections that are critical to a functioning democracy, and its abuse directly challenges democratic accountability. EHRAC argues that the legal designation of ‘politically-motivated proceedings’ should apply to the totality of the criminal justice process—and not just the period of pre-trial detention.

Alexei Navalnyy has been a prominent figure in the domestic opposition to President Vladimir Putin due to his opposition marches and hard-hitting, anti-corruption investigations, popularised on his social media channels. He had intended to run for President in the 2018 elections, but was prevented from doing so due to his criminal record. Navalnyy’s Anti-Corruption Foundation has since been declared a “foreign agent” by the Russian justice ministry. Russian security forces raided its premises in late 2019, seizing laptops and other equipment.

The Court ruled in 2016 that Russia had violated Navalnyy and Ofitserov’s right to a fair trial when the Russian courts had convicted them of embezzlement in 2013. It stated that there was clear link between Navalnyy’s public activities and the authorities’ decision to arrest him, which raised concerns that his prosecution and conviction was politically-motivated. The applicants requested that the Russian authorities reopen and terminate the criminal proceedings on the basis of the 2016 judgment.

However, in January 2017, the Leninskiy District Court again ruled that the pair were guilty of embezzlement. Navalnyy and Ofitserov lodged a new application at the ECtHR alleging that the fresh examination of their criminal case had violated their right to a fair hearing. Navalnyy also alleges that his prosecution and conviction was politically-motivated, and was intended to obstruct his political activities and result in his disqualification from standing in elections on the grounds of his criminal record. He is alleging a violation of Article 18 in conjunction with Art. 6 and Art. 7 (no punishment without law).

EHRAC’s third-party intervention was co-written with Professor Jeffrey Kahn (Professor of Law at Southern Methodist University, Texas). He sets out in plains term the legal context in Russia which makes political interference a routine occurrence. “Judicial independence is the exception, not the rule, in Russian history”, writes Professor Kahn, who details the instrumentalization of the law for political uses. Russia, he argues, operates as a “dual state” in which judicial independence is limited or eliminated in cases of political interest to the state.

Professor Kahn cites some shocking statistics. One study of defamation lawsuits in Russia revealed that they are filed at a per capita rate that is 100 times than is found in the United Kingdom. The largest share of lawsuits is filed by state officials. Embezzlement is a favoured criminal charge used recurrently against political opponents, not least because, unlike crimes which are reported to the police by citizens, economic crimes require “proactive investigation” by legal authorities.

If EHRAC’s third-party intervention is successful, the ECtHR will be able to acknowledge that the totality of criminal proceedings can be subject to the application of Article 18, enabling criminal trials to be assessed on the basis of whether the authorities acted in ‘bad faith’.[1] It would also extend its application to civil proceedings, for instance, in cases concerning executive control over the judiciary for the purpose of undermining democratic accountability, such as through the dismissal of judges or political influence over the appointment and promotion of judges.

[1] EHRAC also cites Intigam Aliyev v Azerbaijan, in which the Court condemned a troubling pattern of retaliatory prosecutions and misuse of criminal law, and Ilgar Mammadov v Azerbaijan (Article 46(4)), in which the Court suggested that an arrest and charge predicated on ‘bad faith’ would vitiate the outcome of any subsequent proceedings based on the same evidence.