This is the first year that the Excellence Awards have included a specific category for the field of human rights, making Philip the first ever recipient of the award.

Philip Leach is an unsung hero of the cause of human rights and I can think of no one who is more deserving of the award of Human Rights Lawyer of the Year.

Through a combination of litigation, advocacy and capacity-building activities at EHRAC, Philip’s work has affected the lives of hundreds of people in the former Soviet Union, both victims of human rights violations and the lawyers seeking redress on their behalf at the European Court of Human Rights. He combines this with teaching human rights law at Middlesex University, where EHRAC is based, passing his expertise on to the next generation of human rights defenders.

Mr Leach has been a great source of inspiration for me and many of our colleagues in the continuous struggle for the respect for human rights, even in seemingly hopeless situations, and in spite of the climate of total impunity and fear reigning in the region…[He] is the most outstanding human rights lawyer I have ever met. 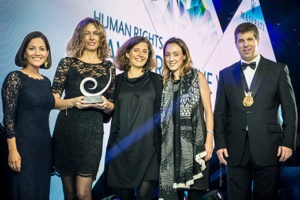 Although Philip himself was unable to attend the awards, three of his EHRAC colleagues were on hand to accept the award on his behalf.

Congratulations have been pouring in from Philip’s peers; all of us at EHRAC and Middlesex University are extremely proud of this well-deserved recognition of his achievements. Dr Alice Donald, his colleague at the Law School, said:

There could not be a more worthy – and modest – winner than Philip. He is a great advocate for the European Convention on Human Rights in the UK, a role which is needed now more than ever. This award is also a testament to the brilliant work of EHRAC.