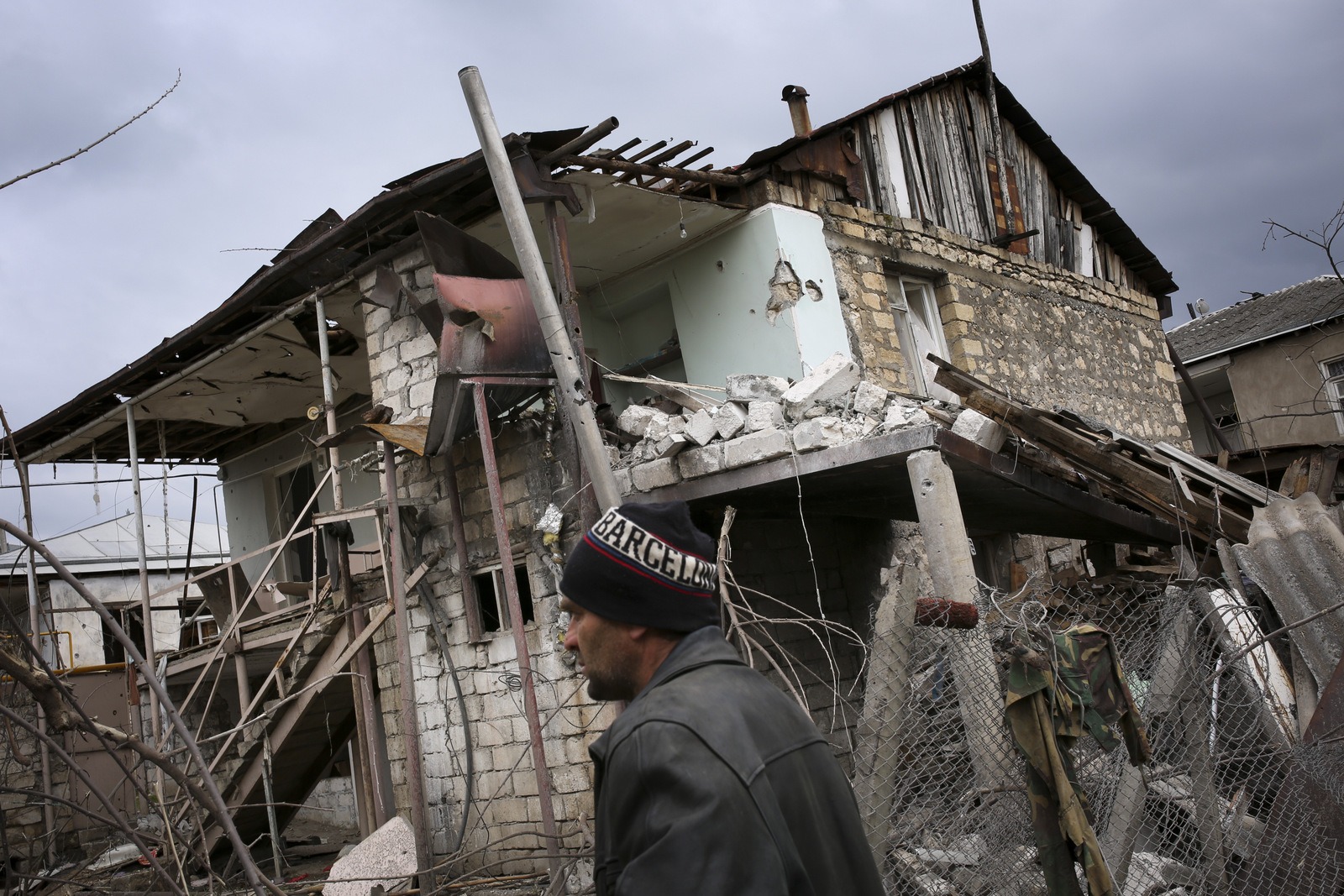 An ethnic Armenian man walks past a destroyed house during the fighting in Martakert province in the separatist region of Nagorno-Karabakh, Azerbaijan, Monday, April 4, 2016. Fighting raged Monday around Nagorno-Karabakh, with Azerbaijan saying it lost three of its troops in the separatist region while inflicting heavy casualties on Armenian forces and the Armenian president warning that the hostilities could slide into a full-scale war. (Vahan Stepanyan, PAN Photo via AP)

On 20 December 2019, EHRAC, together with the Allard K. Lowenstein International Human Rights Clinic at Yale Law School, submitted a third-party intervention at the European Court of Human Rights (ECtHR) in two cases arising from the renewal of hostilities between Armenia and Azerbaijan in April 2016 over the disputed Caucasus region of Nagorno-Karabakh. EHRAC’s third-party intervention contends that, when a State’s use of force beyond its territory infringes upon a person’s right to life, the Court can decide whether it has jurisdiction by applying a ‘direct-and-foreseeable effects’ test. The cases are currently awaiting judgment.

In early April 2016 – in a brief conflict sometimes referred to as the “Four-Day War” – both Armenian and Azerbaijani armed forces launched shells and rockets from their respective territories into villages a few kilometres beyond the Nagorno-Karabakh line of contact. Affected civilians from both States subsequently lodged complaints to the ECtHR alleging violation of their rights under the European Convention on Human Rights (ECHR), including violations of the right to life (under Article 2) due to the real and imminent threat to life posed by the indiscriminate bombings.

It is well established in the European Court’s case-law that a State may have human rights obligations beyond its national borders. The European Court has historically recognised extraterritorial jurisdiction under the principles of “effective control” or “state agent control.”

“Effective control” has been found to apply when a State assumes some of the public powers normally exercised by a sovereign government. This has also been applicable when human rights violations have been perpetrated by a separatist regime in a second State to which an original State provides vital military, economic, financial and economic support.

The Court has recognised “state agent control” when use of force by a State agent against an individual outside the State’s national borders may bring the affected individual under the jurisdiction of the State. In Issa v. Turkey, the European Court found that Turkey had exercised extraterritorial jurisdiction when its armed forces exerted lethal force on individuals in foreign territory.

EHRAC has litigated a number of cases that include claims over extraterritorial jurisdiction in disputed territories, including: in Nagorno-Karabakh, Eastern Ukraine and Russian-occupied Crimea, and breakaway regions in Georgia under effective Russian control. In one recent case communicated to the ECtHR concerning the killing of a Georgian man by a border-guard in the disputed territory of Abkhazia, EHRAC submitted evidence establishing Russia’s responsibility due to its ‘effective control’ over Abkhazia and the de facto Abkhaz authorities. Unrecognised republics in the South Caucasus – including Nagorno-Karabakh – have been called human rights ‘grey zones’ due to disputed jurisdictional claims.