“I was arrested on the orders of the Azerbaijani authorities, but it was the Georgian authorities that treated me unlawfully and unfairly. Despite recognising I was being politically persecuted, they refused to accept my son’s and my asylum requests. I have undergone all judicial processes available in Georgia, and I have nowhere else to turn here. Georgia is a member of the Council of Europe, and is obliged to adhere to European standards, including when it comes to rights. I believe in the fairness of the European Court to resolve my case.”

On 19 September 2017, prominent Azerbaijani opposition activist Dashgin Aghararli submitted his application to the European Court of Human Rights, challenging the decision by Georgian authorities not to grant him asylum. Despite acknowledging that he would be persecuted if extradited to Azerbaijan, the authorities refused his application for refugee status on grounds of threats to national security, territorial integrity and/or public order, without any justification on what basis such a decision was made. Dashgin is represented by the European Human Rights Advocacy Centre, based at Middlesex University, and the Human Rights Centre (Tbilisi).

Dashgin has been a member of the opposition party Musavat since 1993, and a prominent and persistent critic of former Azerbaijani president Heydar Aliyev, as well as the current president, Ilham Aliyev. Dashgin has reported persecution by the Azerbaijani authorities through surveillance, harassment, and threats which began in 2003, and severely intensified after he actively campaigned for an opposition candidate in the 2013 presidential election. Soon after, he moved to Ukraine and then to Turkey, but feared being extradited back to Azerbaijan from both countries. In March 2014, he attempted to cross the Turkish border into Georgia with the intention of seeking asylum there, but he was arrested by the Georgian border guards under a red notice from Interpol. He was told he was wanted by Azerbaijan on the basis of alleged tax evasion, imprisoned for six months, and released on bail in August 2014.

While in prison, he applied for refugee status to the Ministry of Refugees, as did his son, who had arrived in Georgia in February 2015. Georgian legislation provides that asylum applications should be reviewed within six months: however, Dashgin was only informed that his asylum claim had been denied after 18 months. The Ministry of Refugees recognised that both Dashgin and his son could be persecuted if returned to Azerbaijan (which under Georgian Law and the UN 1951 Refugee Convention meant that they met the necessary requirement to be granted refugee status); however it stated that “their presence contradicts the interests of the country…due to serious circumstances”. Dashgin challenged the refusal before Tbilisi City Court, which upheld his appeal and found the Ministry’s decision was unsubstantiated. During these proceedings, Dashgin learnt that the Ministry’s decision was based on a letter from the State Security Service never seen by the applicant, which stated that there were reasonable grounds for believing that he may create a threat to state security and/or to the territorial integrity and public order of Georgia. However the Tbilisi Appeal Court reversed the City Court’s finding without providing any information about what constituted such threats in this instance. The lack of reasoning provided by both the Ministry and the Tbilisi Appeal Court raises serious questions about the authorities’ discretionary powers to take such decisions with little judicial oversight or control. Since his release from prison, he and his son have not received any government support and live in poor conditions.

“It should be obvious that the Ministry of Refugees should justify any decisions it makes about refusing asylum claims, yet it has not. The Ministry’s regular failure to provide any justification for its decisions is already a systemic issue in Georgia: Dashgin’s case represents our opportunity to challenge the state authorities’ seemingly unchecked discretionary powers.”

Dashgin argues before the European Court that his right to a fair trial has been violated, under Article 6 of the European Convention on Human Rights (ECHR), given the lack of reasoning provided by the Ministry and the Tbilisi Appeal Court for the denial of his asylum claim, and that he did not have any effective domestic remedy to challenge it (Article 13 ECHR). Finally, he raised a violation of his right to a private and family life under Article 8 ECHR, as a result of the Ministry’s refusal to grant his asylum claim. 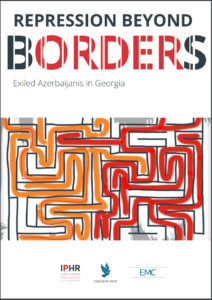 Dashgin’s case is not an isolated example: according to statistics provided by the Georgian government, more than half of those denied entry into Georgia on state security grounds in 2016 and 2017 were from Azerbaijan. Concerns for the safety of Azerbaijani exiles living in Georgia have increased in recent months, particularly after the abduction of Azerbaijani journalist Afgan Mukhtarli in central Tbilisi who later reappeared in detention in Azerbaijan. The International Partnership for Human Rights, Freedom Now and the Human Rights Education and Monitoring Centre (Tbilisi) published a joint report in September, Repression Beyond Borders: Exiled Azerbaijanis in Georgia, detailing the cases of Dashgin and others who have been subjected to threats to their personal freedom and security.