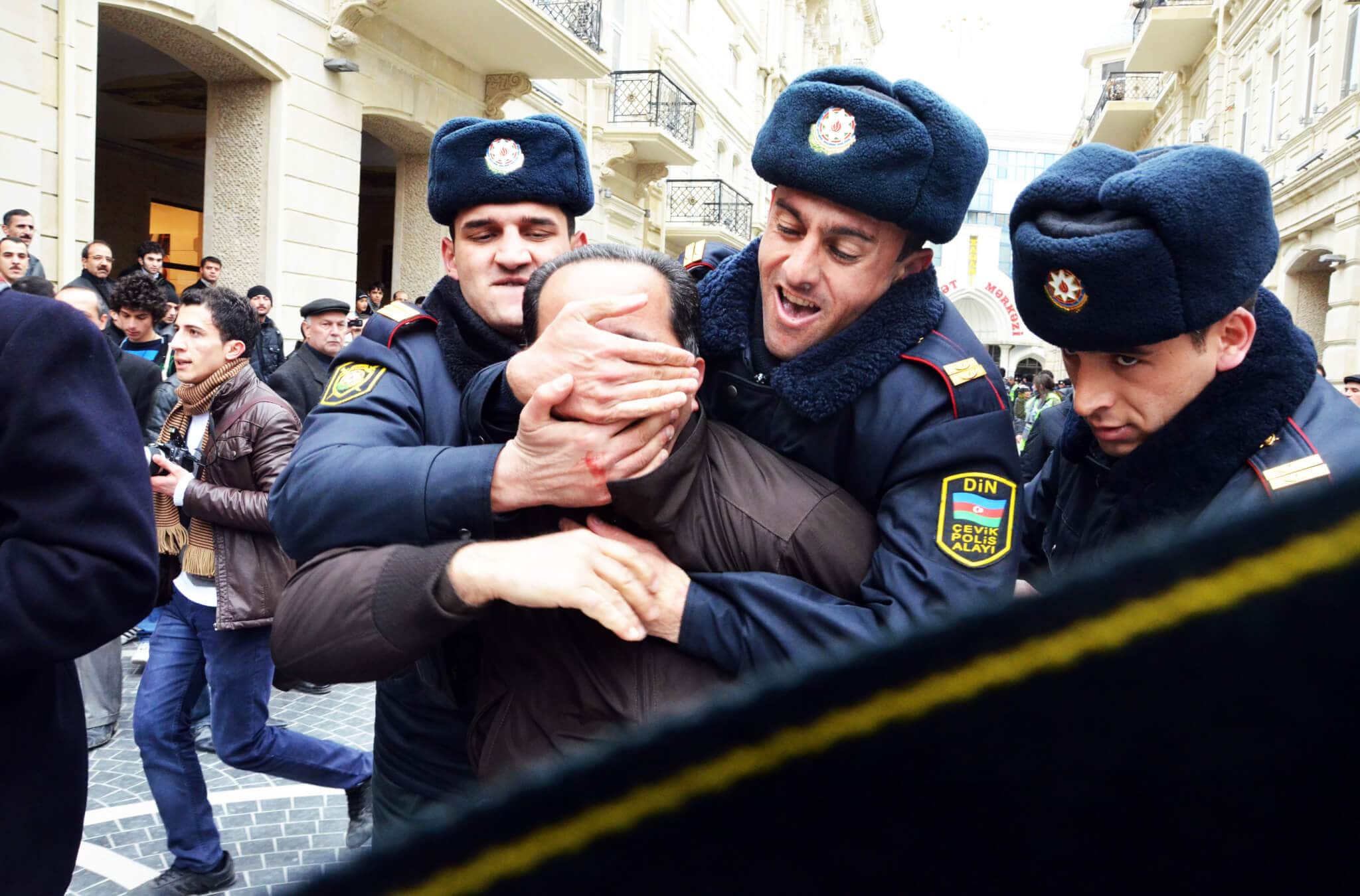 EHRAC and Amnesty International have urged the Council of Europe’s Committee of Ministers to call upon the Government of Azerbaijan to end the restrictive situation for human rights defenders in the country, as part of its obligations to comply with legally-binding judgments of the European Court of Human Rights (ECtHR).

The joint submission focuses on the repressive nature and abusive application of legislation governing NGOs in Azerbaijan, as well as the continuation of arbitrary arrests, detentions and other sanctions against human rights defenders and critical voices. It sets out general measures required by the Government of Azerbaijan in response to a group of ECtHR judgments currently under review by the Committee of Ministers.

The Ilgar Mammadov group of cases concerns the arrests and detention of a number of human rights defenders, government critics, and activists following a crackdown on civil society in Azerbaijan in 2013. The ECtHR has previously established a “troubling pattern of arbitrary arrest and detention of government critics, civil society activists and human-rights defenders through retaliatory prosecutions and misuse of criminal law in defiance of the rule of law”. It ruled that the eight applicants in the group were subjected to “retaliatory prosecutions” by the Azerbaijani authorities because of their human rights work or civil society activism, and highlighted the need to protect them by taking measures to eradicate the practice.

Applicants in the group include the prominent human rights defenders Intigam Aliyev and Rasul Jafarov, as well as the investigative journalist Khadija Ismayilova. EHRAC represents Aliyev and Jafarov within the context of the group, and represents Ismayilova in a separate case before the European Court relating to a travel ban imposed upon her.

The Committee of Ministers will review the group of cases in September 2020.

EHRAC and Amnesty International call upon the Committee of Ministers to require the Government of Azerbaijan to ensure an enabling environment for human rights defenders and their organisations, in which they can effectively exercise their right to freedom of association, as part of full compliance with the ECtHR judgments, by taking the following steps:

Amend the current overly restrictive domestic laws regulating NGO activities so that they are brought into line with relevant international human rights standards, and the recommendations of the Venice Commission.

The abusive application of restrictive NGO legislation was an instrumental aspect of the initial crackdown on civil society in Azerbaijan from 2014. Such restrictions led, for example, to the criminal conviction of Rasul Jafarov in 2015 (which was quashed in April 2020). When delivering judgment in Jafarov’s case, the ECtHR noted that “new onerous regulations, coupled with the reportedly intransigent and arbitrary manner in which they were applied by the authorities, made it increasingly difficult for NGOs to operate” and that “[this] drove a number of NGOs to operate on the fringes of the law.”

Since 2013 a series of amendments have been made to the legislation governing NGOs in Azerbaijan, particularly in relation to the registration of NGOs and grants, which made it very difficult (if not impossible) for NGOs to operate and implement donor-funded projects in the country. In its 2014 opinion , the Venice Commission found that the amendments were “likely to have a chilling effect on civil society, especially on those associations that are devoted to key issues such as human rights, democracy and the rule of law”. Abusive application of these laws have led to the de facto criminalisation of the activities of human rights NGOs.

Foreign donors are now required to obtain approval from Azerbaijan’s Ministry of Justice (MOJ) in order to provide grants to NGOs operating in the country. NGOs must also register grant agreements with a donor organisation and any sub-grant agreements with the MOJ before it can spend the monies. Non-compliance can result in the suspension of NGO activities and financial penalties.

The measures have effectively put an end to funding for Azerbaijani human rights NGOs from foreign donors and deprives them of the essential support they need to function properly and to exercise their right to freedom of association.

The Ministry of Justice has also been given new investigatory powers which allow it to monitor compliance of NGOs with their charters and domestic legislation. The rules do not clarify the terms under which the authorities will conduct an investigation, but failure to comply will lead to sanctions.

Stop the “troubling pattern” of arbitrary arrests and retaliatory prosecutions

Discontinue with immediate effect the persecution of members of civil society and end all restrictions of their rights.

Retaliatory prosecutions still continue in Azerbaijan. According to Human Rights Watch (HRW), at least seven Azerbaijani journalists and at least four opposition politicians or activists remained behind bars on bogus charges in 2019.

In December 2019, Sunna Ævarsdottir, the Rapporteur of the Committee on Legal Affairs and Human Rights of the Parliamentary Assembly of the Council of Europe (PACE), relying on the findings of ECtHR judgments and reports by national and international civil society organisations, published a report highlighting cases of political prisoners in Azerbaijan. Ms Ævarsdottir called upon the Azerbaijani Government to implement the Court’s judgments fully and put an end to arbitrary prosecutions. In January 2020, PACE adopted a resolution on the basis of her report calling upon Azerbaijan to put an end to the practice.

Many human rights activists, including applicants within the Ilgar Mammadov group of cases, continue to suffer various consequences of having been convicted because of their human rights work. The joint criminal investigation, which was instigated by the Azerbaijani authorities in 2014 against domestic and foreign NGOs, has not been closed to date and continues to have a chilling effect on civil society at large.

All of the applicants have been released from prison but many of them remain unable to continue their work due to the restrictive NGO environment and are prevented from exercising their full civil and political rights because of their criminal records.

Intigam Aliyev and Khadija Ismayilova remain subject to travel bans imposed at the time of their conditional release. They are still unable to travel abroad for personal or professional reasons. A second travel ban was imposed upon Aliyev in December 2019 on the basis of the alleged failure of his NGO to pay a tax debt (from the period 2011-2014), which he considers to be a continuation of the authorities’ persecution of him for his human rights work.

Human rights lawyers in Azerbaijan have also been subjected to severe retaliation when taking high-profile or sensitive cases, such as those of the above-mentioned human rights defenders and civil society activists. Disciplinary proceedings have been brought against lawyers in response to their legitimate exercise of the right to freedom of expression when speaking out about human rights violations perpetrated against their clients in detention, or for disclosing instances of the abusive administration of justice in their clients’ cases. Over a dozen Azerbaijani lawyers have now been deprived of the opportunity to practise their profession, and over two dozen have been targeted by the authorities since 2005.

On 25 June 2020, the ECtHR ruled that Azerbaijan’s suspension and disbarment of prominent human rights lawyer Khalid Bagirov was in breach of his freedom of expression and right to a private life. He was first suspended in 2011 after commenting about the suspicious death of his client in police custody. Bagirov was later permanently disbarred in 2015 for criticising Azerbaijan’s judicial system during a trial which concerned a domestic court’s failure to implement an ECtHR judgment in the case of Ilgar Mammadov, an opposition politician whose arrest was found to be politically motivated.

The Court ordered the Azerbaijani Government to ensure the “maximum possible reparation” for Khalid Bagirov, “and [that] they should put the applicant, as far as possible, in the position in which he had been before his disbarment.” The Council of Europe’s Committee of Ministers will supervise the adoption of measures aimed at restoring his professional activities.