Victims placed at the centre in Beslan School Siege Judgment 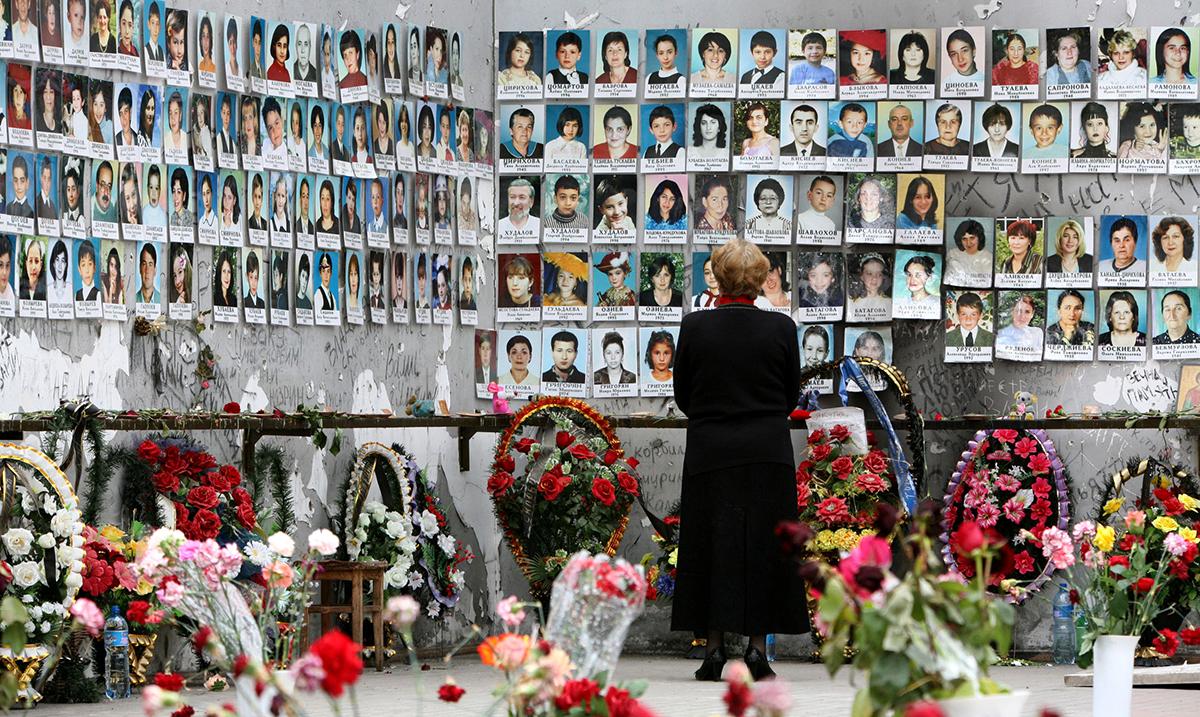 This blog by EHRAC Legal Director Jessica Gavron and Lawyer Jarlath Clifford was originally published on Strasbourg Observers on 24 May 2017.

Last month the European Court of Human Rights (“the Court”) found that Russia violated the right to life of 409 victims of the Beslan school siege. The judgment in Tagayeva and Others v. Russia has been described as a high watermark for the human rights protection of hostages and for confirming the responsibility of states in conducting counter-terrorism operations under the European Convention on Human Rights.

The circumstances of this case are well known, yet the scale and horror of the events remain difficult to comprehend.  On 1 September 2004, approximately 30 heavily armed Chechen separatists entered the schoolyard of School No.1 in Beslan, North Ossetia, where children and their families were celebrating the first day of the new school year (the Day of Knowledge). They took more than 800 children and 300 adults hostage for three days in the school gymnasium, which they wired with improvised explosive devices. On 3 September at 1pm explosions rocked the gymnasium and Russian security forces stormed the school using battlefield weapons. In the ensuing fighting 331 people died (including 186 children), of whom 116 were burnt beyond recognition in the gymnasium.

In a detailed judgment the Court found four separate violations of the right to life under Article 2 of the Convention. It held, unanimously, that there had been violations of the positive obligation to prevent the threat to life and of the responsibility to carry out an effective investigation. It further held, by five votes to two (see partly dissenting opinions of Judges Dedov and Hajiyev), that the planning and control of the rescue operation were inadequate, and that the use of lethal force (flamethrowers and tanks) by the State had been disproportionate.

Throughout the judgment the Court held the protection of life to be paramount, applying the obligations arising in a standard law enforcement scenario under Article 2 of the Convention, while recognising the difficult choices inherent in a large scale anti-terrorist operation. Acknowledging the limits of its role, the Court distinguished between political choices made in the course of fighting terrorism that fall outside its supervision, and operational aspects of the authorities’ actions that have a direct bearing on rights protected under the Convention. It clarified its approach towards the ‘absolute necessity’ test of Article 2 in such sensitive cases (e.g. Finogenov and others v Russia 18299/03 and Isayeva v Russia 57950/00) as applying “different degrees of scrutiny, depending on whether and to what extent the authorities were in control of the situation and other relevant constraints inherent in operative decision-making”(481).

Particularly novel in a case on this scale is the finding of a violation of the positive obligation to take preventive measures to avert or minimise the terrorist attack (as noted by Judge Pinto de Albuquerque in his separate opinion). In referring to the threshold set by Osman v the United Kingdom 23452/94, the Court reiterated its case law that the positive obligation applies not only to the protection of identifiable individuals, but can also be invoked to afford general protection to society (482). The Court distinguished this case from Finogenov  (concerning the “Dubrovka” theatre siege in Moscow in 2002), in which it found no evidence of any advance warning of the attack. In Tagayeva, revelatory  internal directives issued by the Interior Ministry and FSB, (an unusual level of disclosure by the Government in a case concerning the North Caucasus, intended to demonstrate that preventive measures had been taken), satisfied the Court that the authorities had significant specific information including: the intended magnitude and nature of the planned attack (large scale civilian hostage taking); the target (an educational establishment); the geographical area (Malgobek area of Ingushetia near the border with North Ossetia); and the date (1 September, the Day of Knowledge).  It was also relevant that the Russian authorities were familiar with the terrorists’ ruthless tactics having experienced three major terrorist attacks of a similar nature and scale in the preceding ten years. The Court held that:

“A threat of this kind indicated a real and immediate risk to the lives of the potential target population, including a vulnerable group of school children and their entourage who would be at the Day of Knowledge celebrations in the area. The authorities had a sufficient level of control over the situation and could be expected to undertake any measures within their powers that could reasonably be expected to avoid or at least mitigate this risk.”

The measures taken by the Russian authorities were held to be inadequate: despite the available information, over 30 armed terrorists were able to gather, travel over 35 km to Beslan and seize their target, without encountering any preventive security arrangements. The only police officer present on 1 September at School No. 1 was an unarmed youth liaison officer. It was further noted that no single high-level structure was responsible for the handling of the situation and ensuring effective containment of the threat.

The Court examined in detail four crucial aspects of the investigation that it held to be inadequate. First, deficient forensic measures resulted in the ‘striking’ failure to establish the cause of death of a third of the victims, constituting a major breach of an effective investigation that prevented important conclusions from being drawn (507-9). Secondly, the failure to secure, collect and record vital evidence was found to cause ‘irreparable harm’ to the investigation’s ability to carry out a thorough, objective and impartial analysis (516). Thirdly there was a failure, in part as a consequence of the former failures, to adequately examine the use of lethal force by state agents. The Court reiterated that in security operations resulting in casualties, strict accountability for the use of lethal force by State agents is imperative and given the failings in this investigation, the Court found untenable the investigation’s conclusion that no hostage was killed or injured by lethal force used by State agents. Fourthly, there was a breach of the public scrutiny requirement by restricting victim access to key expert reports. The Court emphasized that public scrutiny plays a special role where there are allegations against military or servicemen and an investigation basing its conclusions on confidential documents prepared by the same agencies undermines public confidence and gives the appearance of collusion in or tolerance of unlawful acts (537). These procedural findings reaffirm the Court’s position that the obligation to investigate applies even in complex scenarios resulting in large-scale deaths.

The Court established that in a situation involving a real and immediate risk to life, requiring a rescue operation, one of the primary tasks of the competent authorities should be to set up a clear distribution of lines of responsibility and communication within the Operational Headquarters, and with the agencies involved.  Again the Court emphasized the areas it refrained from addressing such as political decisions taken by the authorities, for instance with respect to negotiation with the terrorists (heavily criticised by victims at the time) and the distribution of responsibility. Nonetheless the absence of formal leadership was found to result in serious flaws in the decision-making process and coordination between agencies that contributed to the tragic outcome (569-574).

Use of lethal force

For the first time in a case concerning anti-terrorist operations by Russian security forces in the North Caucasus, the Court examined the legal framework governing the use of force and found it inadequate to safeguard against arbitrariness and abuse of force (599). Previously, the Court has focused on the application of the ‘absolute necessity’ test in the context of the case and not passed judgment on whether the Suppression of Terrorism Act constitutes an adequate legal framework. However, in this case, involving the use of devastating military grade conventional weapons, the Court held that the failure of the domestic legislation to set principles and constraints on the use of force in anti-terrorist operations, together with the wide-ranging immunity it afforded for harm caused in the course of such an operation, resulted in a dangerous gap regulating situations involving the deprivation of life.

In terms of the use of lethal force, the Court reinforced its competence to deal with the most serious violations of human rights law. Reiterating its findings in Isayeva (191):

“the primary aim of the operation should be to protect lives from unlawful violence. The massive use of indiscriminate weapons stands in flagrant contrast with this aim and cannot be considered compatible with the standard of care prerequisite to an operation of this kind involving the use of lethal force by State agents”, the Court similarly held in Tagayeva that “the use of such explosive and indiscriminate weapons with the attendant risk for human life, cannot be regarded as absolutely necessary in the circumstances.”

Finally, and significantly, the Court made recommendations under Article 46(1) of the European Convention that the individual and general measures draw lessons from the past, raise awareness of legal and operational standards, and deter new violations. The Court stressed that the legislative framework governing large scale security operations had to reflect international standards and, most notably, specified that in order to comply with Article 46, a new investigation should elucidate the circumstances of the use of indiscriminate weapons by State agents and ensure victims access to key documents. However, given that the Kremlin spokesman declared the judgment to be ‘unacceptable’, it remains to be seen whether the Government will refer the case to the Russian Constitutional Court, under amendments in force since December 2015, for a determination on whether it is ‘impossible to implement’ on grounds that it is inconsistent with the Constitution.

In conclusion, this is a judgment that places the victims at its centre. The courage with which they have pursued truth and justice is perhaps the most remarkable aspect of this case. To applicants Ella Kesayeva, and her sister Emma Tagayeva the Court represented hope:

The European Court of Human Rights is a benchmark of justice; it is a body that should be seen as an example to everybody … Beslan happened, and not a single person has been found responsible. We could not find justice in our country; and this again proves that we need such a Court. If even the Strasbourg Court was not there to support us, it really would be a scary world in which to live”

from interview with EHRAC in October 2014.