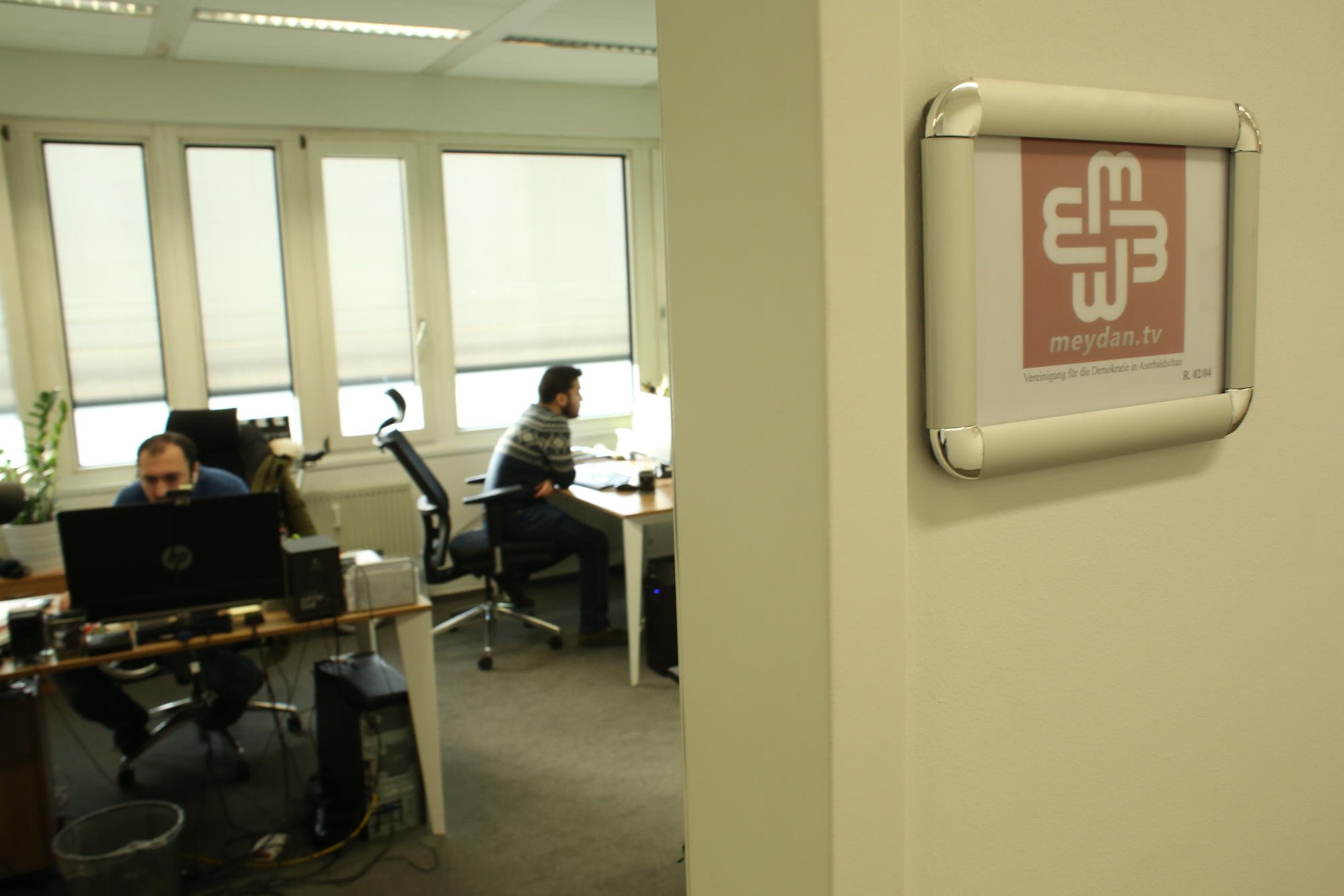 Offices of Meydan TV, one of the four blocked websites (SOURCE: meydan.tv).

Four critical news websites blocked by the authorities in Azerbaijan have responded to the Government’s submissions to the European Court of Human Rights (“ECtHR”) and reiterated their claim that the ban violates their right to freedom of expression. The applicants argue that such a limitation of their rights is unlawful, serves no legitimate aim, and is not necessary in a democratic society. The case now awaits judgment.

EHRAC, together with Azerbaijani partner lawyers, represents the four websites – Azadliq.info, Meydan TV, Azerbaycan Saati and Turan TV – which have all been inaccessible in Azerbaijan since March 2017. Prior to the ban, the four websites were among the few independent online media sources in the country.

The websites were banned soon after Azerbaijan’s president Ilham Aliyev approved amendments to laws governing internet regulation, effectively handing the authorities new powers to block content containing so-called “prohibited information”. The Azerbaijani Government has argued that a number of articles published by the four critical news websites included calls aimed at “forcible change of the constitutional order”, “organisation of mass riots”, and other illegal activities. The applicants claim that the articles addressed issues in the public interest and were blocked because they were critical of the authorities and their policies.

The Azerbaijani Government also claim that the critical news websites have not suffered any significant disadvantage as a result of the action taken against them, not least because they can continue disseminating their content through VPN services or social media platforms. EHRAC and partner lawyer Samed Rahimli, refuted this point, arguing that a website domain is essential for the functioning of an online media platform. VPN services are not a suitable alternative and are even legally banned in some countries.

The applicants also provided evidence indicating a drastic decrease in traffic to the website since the ban, which has had the effect of limiting access within Azerbaijan to high-quality, fact-based, independent reporting. Some of their social media accounts have also been subjected to cyber-attacks and hacking attempts, as a result of which they lost a significant number of followers.

EHRAC rejects the Government’s suggestion that the cases were “duly considered” by Azerbaijan’s domestic courts, which did not in practice provide any effective remedy. No effective and independent review took place in the first instance decision to block access to the websites in 2017, and in subsequent appeals. The courts simply accepted the authorities’ allegations at face value and made no attempt to adequately consider or explain why the content was unlawful.

The vague wording of the provisions set out in the laws governing internet regulation in Azerbaijan allows for their broad interpretation by the authorities. There are no adequate legal safeguards against the abusive application of the laws. The Government’s failure to indicate why the websites’ content amounted to “prohibited information” undermines its claims that it was justified in interfering with the applicants’ freedom of expression (Article 10 of the European Convention on Human Rights).

The Azerbaijani authorities continue to pursue action against the websites. In February 2020 the Ministry of Transport, Communications and High Technologies requested the domestic courts to impose a ban on the applicants’ ability to share their content through VPN services, social media, and other platforms. This would mean, in effect, full censorship of access to the content of the websites.

The case of the four blocked websites highlights the grave situation for free media in Azerbaijan. Reporters Without Borders’ 2020 World Press Freedom Index ranked the country 168th of 180. Independent media has been suppressed within the country, and critical journalists face criminal charges and imprisonment, threats, travel bans and other forms of repression.

EHRAC collaborated on this case with the Lowenstein Human Rights Law Clinic at Yale Law School, who prepared an extensive note on international standards on freedom of expression, as well as information on media freedom violations in Azerbaijan and comparable countries, which we enclosed in the submissions to the ECtHR.