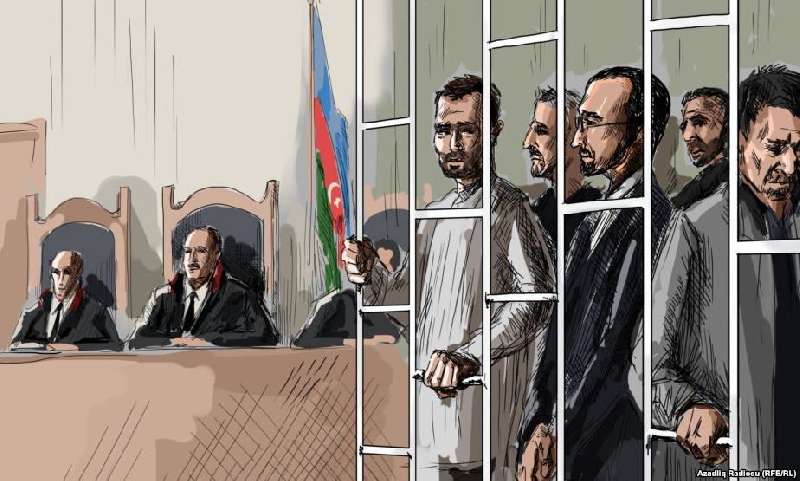 In the evening of 26 November 2015, masked security forces stormed a house in the town of Nardaran, Azerbaijan, where the Muslim Unity Movement (MUM) was meeting. MUM is an unregistered religious group formed in 2015, whose members describe themselves as “non-violent, conservative Shiites”. The authorities alleged that they received information that MUM “formed illegal armed units with the purpose of violently capturing state power and committing acts of terrorism”. MUM has long been a vocal critic of the Azerbaijani Government, accusing it of corruption and authoritarianism. Over 70 people in total were arrested, charged with murder, terrorism, plotting to overthrow the Government and other offences, and were convicted and sentenced to 10-20 years’ imprisonment. Four criminal cases were opened against those arrested and prosecuted – many of whom claim to have been tortured, and forced to sign self-incriminating statements – on reportedly fabricated charges.

This video from Meydan TV* explains what happened.

EHRAC, Yalchin Imanov and Fariz Namazov submitted an application on behalf of the MUM and 17 of those arrested during the operation before the European Court of Human Rights in September 2018. They were prosecuted under the first criminal case opened in relation to Nardaran. They are further supported by a team of three Azerbaijani lawyers representing them before the domestic courts.

How did the events in Nardaran and their aftermath breach the European Convention on Human Rights (ECHR)?

The raid on Nardaran cuts across the full range of systemic human rights abuses ongoing in Azerbaijan: this application to the European Court raises a series of violations of the right to a fair trial regarding the court proceedings and convictions of the MUM members (Article 6 ECHR), which we argue were politically motivated (Article 18 ECHR). We also argue that our clients were subjected to degrading treatment (Article 3 ECHR), such as being held in metal and glass courtroom docks.† We also raise breaches of the rights to freedom of religion (Article 9 ECHR), freedom of expression (Article 10 ECHR)) and freedom of association (Article 11 ECHR), including for incidents after the first raid on Nardaran. For example, Fuad Qahramanli was convicted because of ten Facebook posts critical of the Government on a range of matters of public interest, including the security forces’ conduct of the Nardaran operation. Yalchin Imanov, one of our partners in this case, has had his license suspended, and is facing disbarment for publicising information about the reported ill-treatment and torture of his client Abbas Huseynov, one of the Nardaran applicants.

The case is currently pending communication by the European Court to the Azerbaijani Government.

*Access to Meydan TV has been blocked in Azerbaijan, as part of a wider State repression of independent media and civil society. EHRAC and our Azerbaijani partner lawyers are representing Meydan TV and three other blocked independent or opposition news websites before the European Court of Human Rights.

†The applicants claims regarding their ill-treatment and torture have been raised before the European Court in separate applications.