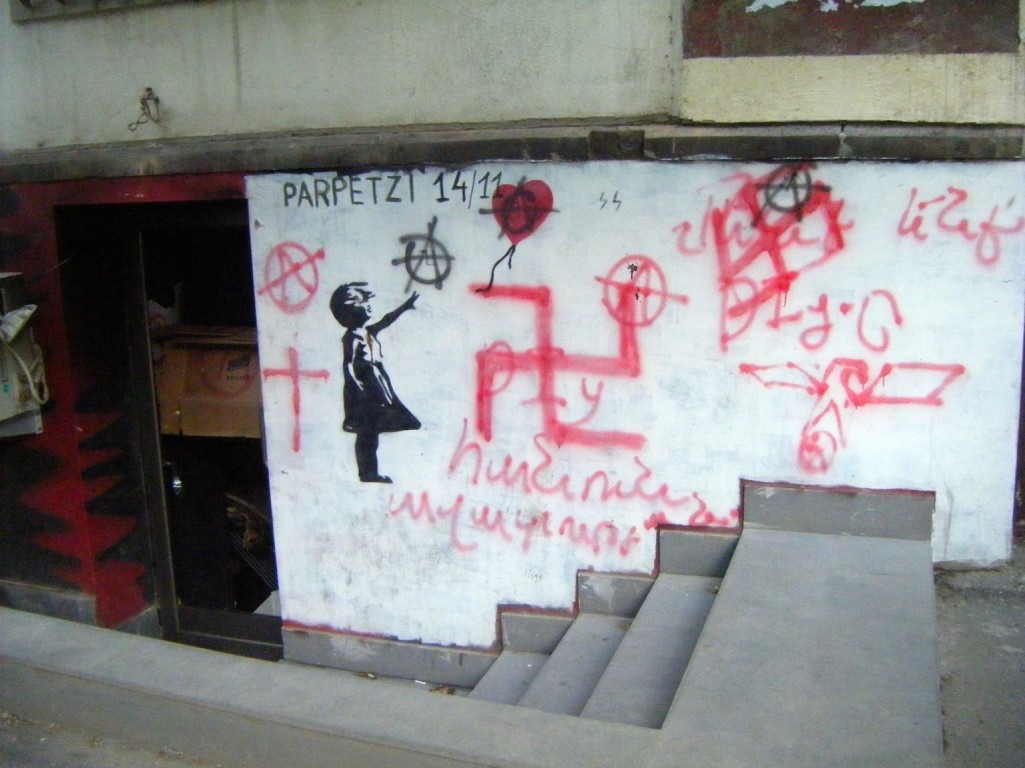 Yerevan’s D.I.Y. Club was once a popular spot for Armenia’s LGBT+ community, and one of the few public venues available for sexual minorities in a country that remains deeply conservative.

But at around 5 a.m. on 8 May 2012, the club was firebombed by a group of men with neo-Nazi affiliations.

DIY’s co-owner, Amine ‘Tsomak’ Oganezova, is a well-known member of Armenia’s LGBT+ community. EHRAC and Pink Armenia are representing Tsomak as she pursues justice before the European Court of Human Rights.[i]

Tsomak alleges that she suffered ill-treatment (Article 3 of the European Convention on Human Rights) and interference with her right to respect for her private life (Art. 8) as a result of the arson attack and the hate campaign of threats, humiliation and harassment that followed. She also claims that she was discriminated against on the basis of her sexuality, and that the investigation into the firebombing, and the complete failure by the authorities to investigate and properly protect her from the subsequent campaign of violence and intimidation, was so inadequate that she was forced into exile to protect herself (Art. 14 in conjunction with Arts. 3 and 8).

After publicly criticising Armenia’s human rights record, Tsomak was subjected to intimidation, threats, online hatred and abuse on the basis of her sexual orientation.

On the night of the arson attack, a group of men had barged into D.I.Y. club and began harassing and intimidating staff. They wore jackets emblazoned with the logo of “Black Ravens Armenia”, a well-known fascist group operating in the country.

Hours later, the bar was gutted by fire.

Police arrived on the scene but left without asking questions. Forensic experts quickly announced that no fingerprints could be found.

Tsomak was later approached by employees of a nearby business who had CCTV footage of the arson attack. Tsomak’s colleague recognised one of the perpetrators visible on the tape—one of two brothers who had previously targeted the bar. The police were called, and the security camera footage was taken as evidence.

In an extraordinary turn of events, one of the suspects was bailed on sureties provided by two MPs from the Armenian Revolutionary Federation party. One of the MPs later explained his support for the two brothers who, he said, “behaved in the context of our societal and national ideology, in a right way.” Tsomak, he added, was of a “type . . . [who] are destroying Armenian society.”

An Armenian court found the two brothers guilty of arson in July 2013, handing them a suspended sentence of two years’ imprisonment. The homophobic hate motive central to the arson attack was neither prosecuted nor addressed by the court as the provision for hate crime in Armenian legislation does not include sexual orientation as a possible ground.

Tsomak complained that the court’s sentencing was too lenient and failed to reflect the essential element of homophobic hate. Her appeal was rejected, and the unchanged leniency of the sentence enabled the court of appeal to grant an amnesty to the perpetrators in a decision in October 2013.

A hate campaign comprised of threats, humiliation and harassment was conducted against Tsomak and the DIY Club in the days and weeks following the arson attack by a number of perpetrators associated with the Black Ravens. Death threats and swastikas were scrawled on the charred walls of the club. Furnishings were smashed and covered with paint. Tsomak was personally abused, spat at, and threatened with violence if she re-opened the club.

As the attacks and harassment intensified, the deputy speaker of the Armenian Parliament voiced support for the two brothers for their actions “against the homosexuals who have created a den of perversion in our country”, which he called “completely right and justified.”

Tsomak was terrified as her friends and family were also targeted. Despite her repeated reports of violence and harassment the police did nothing, whilst MPs and the media endorsed the arson and hate campaign as pro-Armenian.

Tsomak’s life in Yerevan became untenable. Her sister was threatened and fired from her job because her boss was worried about repercussions from her association with Tsomak. Within weeks, Tsomak and her sister felt they had no choice but to leave Armenia. They went to Sweden, where Tsomak applied for asylum and now lives.

In July 2020, EHRAC responded to the Armenian Government’s observations in Tsomak’s case.

The authorities had previously admitted that Armenia’s hate crime legislation was defective and pointed to this reason for the investigation’s failures. They did not dispute Tsomak’s claims and accepted that she had been the victim of a homophobic hate crime.

EHRAC reiterated the assertion that Tsomak had been subjected to a concerted campaign of verbal and physical homophobia, which constituted inhuman treatment. She was further discriminated against by expressions of official support for her victimisers and institutional failures at safeguarding her. EHRAC argued that the legislation and the authorities failed to recognise her as a holder of protection rights.

Homophobia remains rife in Armenia, where the authorities have repeatedly failed to effectively investigate anti-LGBT+ violence. A proposed bill which seeks to address issues of equality has recently been criticised because it does not include sexual orientation and gender identity as grounds for protection from discrimination.

[i] The case was originally started by Interights.