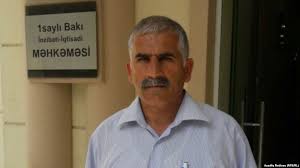 Alayif Hasanov is one of the courageous Azerbaijani human rights lawyers who has dared to represent imprisoned human rights defenders in criminal cases against them as part of the civil society crackdown. In 2014, he visited one of his clients – renowned human rights defender and activist Leyla Yunus – in a pre-trial detention centre where she told him about her physical and psychological harassment by a cellmate, and the authorities’ failure to protect her. As the prison management ignored his complaints, Alayif Hasanov shared the information about Leyla’s situation online, which was later republished by the media. The next day, the same cellmate sued him for referring to her as a criminal and a smoker, and a recidivist, despite the fact that the latter was added by the media. Alayif was convicted on charges of libel, and was permanently disbarred in July 2016 as a result of the conviction. Following his disbarment, Alayif Hasanov was no longer able to represent Leyla Yunus, and it has also ended completely and indefinitely his ability to practice as a lawyer before domestic courts in Azerbaijan. Having unsuccessfully tried to challenge his disbarment before the Azerbaijani courts, Alayif turned to the European Court of Human Rights in September 2017.

On 5 December 2018, EHRAC filed its further submissions with the Court in reply to the Azerbaijani Government’s observations in this case, arguing that Alayif’s disbarment is arbitrary and politically motivated, and aimed at curtailing his professional activities as a human rights lawyer, as a part of the wider repression of the civil society in the country.

How does Alayif’s disbarment breach his human rights?

Before the domestic courts, Alayif argued that his post online about Leyla’s cellmate referred to well-established facts, and therefore the libel charges upon which his disbarment was based were unjustified (these charges are the subject of a separate case before the European Court). We argue that Alayif’s disbarment was clearly arbitrary, without any judicial oversight. The Azerbaijani Bar Association did not inform Alayif about the meeting where the decision to disbar him was taken, and he was therefore deprived of the opportunity to defend himself, nor did they inform him after the decision had been made. He found out about his own disbarment on a pro-governmental website ‘celebrating’ the news that a ‘traitor’ had been disbarred.

Before the European Court, we argue that his disbarment interferes with his right to professional life (Article 8 of the European Convention on Human Rights (ECHR)), his peaceful enjoyment of possessions (Article 1 of Protocol 1 ECHR) and breaches his right to freedom of expression (Article 10 ECHR); and that the proceedings were politically motivated (Article 18 ECHR). We also challenge the law regulating lawyers’ activities beyond its application to Alayif’s case, arguing that it is formulated in vague terms, provides the Bar Association with substantial discretionary power in deciding sanctions against lawyers, and does not have adequate safeguards. We have requested that, in its judgment, the Court call for Alayif’s license to be restored, and the law’s amendment.

Over the last few years, the legal profession has become the target of repressive measures by the State, which seem aimed at restricting lawyers’ ability to take on ‘sensitive’ cases, especially those concerning human rights violations. In autumn 2017, the Azerbaijani parliament approved a package of amendments to legislation governing the legal profession, essentially prohibiting those who are not members of the Azerbaijani Bar Association from representing clients domestically. In the context of Azerbaijan, where the Bar Association is a highly-politicised body under state influence, this has all but decimated the ability of human rights lawyers to take cases. The targeting of the legal profession is the most recent manifestation of the Government’s crackdown on dissenting opinion over the last five years.  Since 2014, the Azerbaijani authorities have ramped up efforts to stifle critical voices and dissent, including journalists and media outlets, human rights defenders and civil society organisations. Many of the few lawyers who dare defend them – Khalid Bagirov, Yalchin Imanov and Intigam Aliyev – have been subjected to warnings, suspension of their licenses, disbarment or otherwise supressed, which has led to their removal from legal defence teams of the victims.

In September 2018, the European Court ruled that the arrest and detention of Intigam Aliyev – one of the most well-known human rights lawyers in Azerbaijan – was aimed at punishing him for his human rights activism. It ruled that Azerbaijan must take action to address the repression of human rights defenders, stating that:

“the necessary general measures to be taken by the respondent State must focus, as a matter of priority, on the protection of critics of the government, civil society activists and human-rights defenders against arbitrary arrest and detention. The measures to be taken must ensure the eradication of retaliatory prosecutions and misuse of criminal law against this group of individuals and the non‑repetition of similar practices in the future”.

Alayif’s case will contribute to the growing body of jurisprudence from the European Court calling on Azerbaijan to urgently address its treatment of those who criticise – implicitly or explicitly – the authorities.